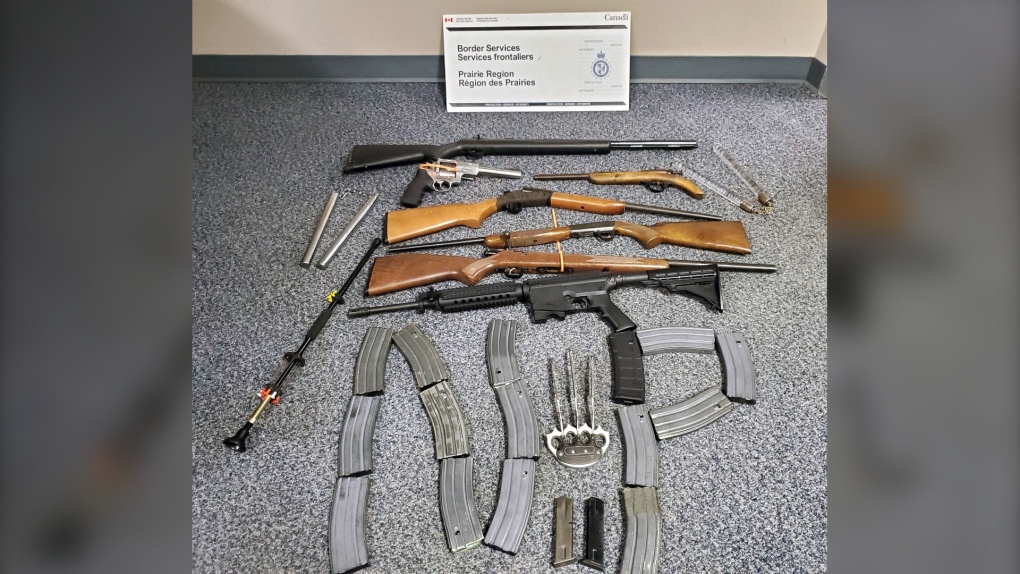 Guns, weapons and magazines seized by the Canada Border Services Agency at the North Portal, Sask. border crossing during a search on June 30. (Courtesy: CBSA)

REGINA -- The Canada Border Services Agency (CBSA) has seized a total of 18 restricted and prohibited guns from American travellers at its North Portal crossing during four separate searches in June and July.

“While the border remains closed to discretionary travel, the CBSA team at North Portal continues to stand on guard for Canadians,” Ben Tame, the CBSA’s Director for Southern Saskatchewan said in a release. “This past summer, our officers have been successful in mitigating a variety of threats, including the spread of COVID-19, and also the risk posed by undeclared firearms entering the country.”

The first search happened on June 30 when an American man travelling to Alaska was stopped for further examination. CBSA officers seized two prohibited pistols, a rifle and a twelve gauge shotgun as well as two prohibited pistol crossbows and several other items banned in Canada including a stun gun, switchblade and an airsoft replica firearm.

The man was arrested and had his vehicle seized before it was released with a $4,500 penalty. The traveller forfeited the seized items and returned to the United States.

The second search, also on June 30, resulted in another American man having criminal charges laid against him and the forfeiture of numerous restricted and prohibited weapons and accessories, including:

The traveller, 51, has been charged with three counts of Customs Act violations and two counts under the Criminal Code, although the CBSA did not outline specific charges. The accused has been released and a court date has yet to be determined.

On July 5 another Alaska-bound American was stopped. Officers found two restricted pistols, a prohibited blowgun and extender, five prohibited magazines and a barrel for a handgun. He was arrested and penalized $3,000 for the return of his seized vehicle before returning to the United States without his forfeited items.

On July 21, a third US citizen heading to Alaska was searched and officers seized a prohibited AR-15 semi-automatic rifle, three banned magazines and a silencer. He forfeited the items and returned to the United States after paying a $1,500 penalty.

The CBSA is reminding travellers to leave their guns at home when trying to enter Canada and declare any firearms to an officer at the first opportunity and follow import regulations. Not doing so can result in arrest, seizure, financial penalties and even a potential ban from entering the country.

North Portal is one of five Canadian entry ports identified for travel to Alaska.

The border will remain closed to discretionary travel until at least Oct. 21 due to COVID-19.