'A bias exists and they're maybe not aware of it': Regina family considers legal action after daughter didn't make high school football team

REGINA -- A local family is considering legal action after their daughter didn’t make the Dr. Martin LeBoldus High School football team. The family thinks she didn’t make the team because she is a girl.

Hannah Ounsworth is a Grade 12 student with experience playing Regina Minor Football (RMF). She says passion for the sport runs in her family, down to her two younger sisters.

"[It’s] the team you want to be on, and it's an amazing culture and the program is super strong, and the coaches are super well respected," Hannah said of the football program at her school. "I haven't really had a group at school, sport team wise, to be a part of and I just thought it'd be a great team to join."

LeBoldus blood runs deep in Hannah’s family. Her parents Damon and Chantal, met there as high school students. The pair said when their daughter approached them about trying out for the LeBoldus team, they were hesitant. 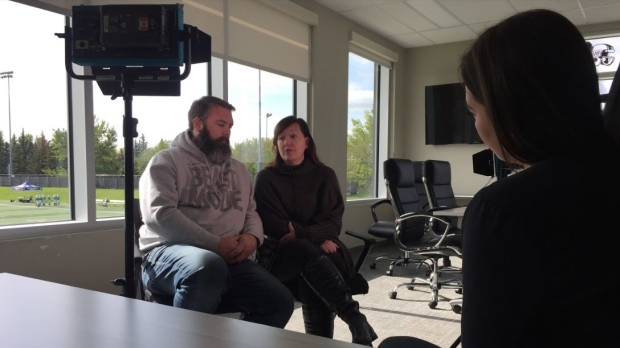 “We know the long-standing tradition of football at LeBoldus [because] we lived it,” Chantal Ounsworth said. “We know that it’s the team that everyone wants to be on. We understand and respect that people have opinions of girls playing contact sports, specifically tackle football.”

There has never been a girl on the LeBoldus football team.

The Ounsworths say they have positive memories from their time with the Golden Suns, and say they have “nothing but respect” for the school and its staff. The LeBoldus Golden Suns high school football program is regarded as one of the most competitive in Regina, with many city and provincial championships under its belt.

The Ounsworths say something didn’t sit right with them when their daughter didn’t make the team. Instead, Hannah was referred to the elite woman’s tackle football team, the Regina Riot, by head coach John Foord.

In follow-up meetings with the coaching staff the Ounsworths say they were told Coach Foord likes to cap his roster at 46. The 2017-18 LeBoldus yearbook shows 51 players.

According to the Regina High Schools Athletic Association's website, there is no cap to roster size in high school football.

Hannah said there were five players cut from the team this year.

"We believe of everyone who did everything that was asked of them, that she was the only cut," Chantal said.

Over the summer, the Ounsworth’s filed a complaint with the Human Rights Commission.

Hannah says she wants to be afforded the same opportunity as boys, both above and below her level of experience and size.

The Regina Catholic School Division says its coaches and staff are prevented from discussing the matter according to The Local Authority Freedom of Information and Protection of Privacy Act (LAFOIP), and because the family has retained legal counsel.

“The Regina Catholic School Division support the decisions made at the school level,” a school division representative said in an email to CTV News.

Two years ago, Hannah was a Grade 10 student eager to play football. She approached the coaching staff and asked what it would take to make the team. She said she was instructed to gain experience playing the game elsewhere. Hannah joined the Regina Victoria’s, a tackle football team, with the intention of taking that experience to her high school team.

In February of this year, Hannah was in Grade 11 and began tryouts for the LeBoldus football team with a season of RMF behind her. Tryouts included rigorous weight-lifting plans, off-season team workouts and a training combine followed by Spring Camp in May. Hannah said those months weren’t always easy.

The scrimmage roster for Spring Camp was posted in the boys' locker room. Hannah didn't have access to it until another player took a photo of it for her.

"She was listed as playing nose tackle," Damon said.

Nose tackle is a defensive position that plays the centre of the defensive line. The position is typically filled by one of, if not the biggest, players on the field. Hannah stands 5’10’ and 150 lbs. Hannah said she feels the coaches set her up to fail by placing her in this position that she says she expressed no interest in playing, and would typically be filled by someone much bigger than her.

“You put her at a position that's typically dominated by your biggest player, and then you cut her because you said she couldn't match up physically,” Damon said.

According to correspondence between the lawyers representing the school division and the Ounsworths, the Director of Education reviewed the situation and met with the LeBoldus coaching staff, and believes there was no indication of any discrimination based on gender.

“The expectation was never that she'd see playing time during a game; we don't want to interfere with coaching decisions in that way. If you have a philosophy that is a winning culture, okay, we're totally good with that,” Chantal said.

Despite choosing to make a Human Rights complaint and considering legal action, the family says their feelings toward the school and its staff haven’t wavered.

“I don't think that they're doing it on purpose and again, we have the utmost respect for the program and the staff,” Chantal said. “We just think that [a bias] exists and that they're maybe not aware of it."

While Hannah’s opportunity to play with the team is dwindling as the football season passes, she says she's taking action for the players who will come after her.