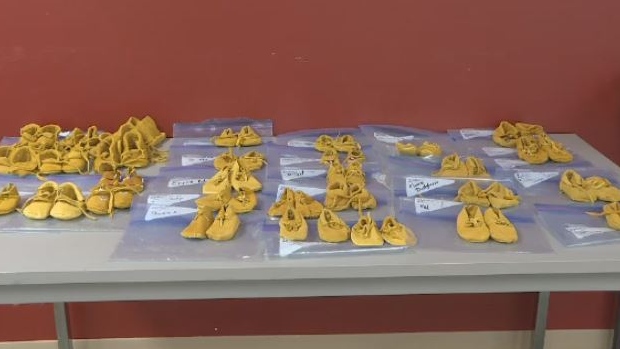 Members of Kawacatoose First Nation completed a month long labour of love and healing on Friday.

The project had dozens of volunteers hand-making moccasins from scratch, for the missing and murdered loved ones of the community.

“We started with the making of the moccasins,” Jordon Dustyhorn, who made a pair of moccasins for his sister, said. “The moccasins are supposed to make their travels on to the spirit world a little bit easier.”

He said the project helped him find a sense of closure for his sister. Dustyhorn said there are approximately 15 people missing from the community.

“It did help, it does help,” Dustyhorn said. “I’m so grateful for the ones who came and helped out.”

Brigit Jimmy is the leader of the moccasin project, and she said the idea came to her cousin in a dream.

“He had a dream that his sister came to him and told him, ‘We can’t walk. We can’t go where we’re supposed to be going, because we don’t have the proper footwear.’” Jimmy said.

On Friday the project was finally completed, and organizers took the finished moccasins to the community graveyard.

“We know they’re not buried there,” Jimmy said. “But their relatives and family are buried there.”

Dustyhorn said that Indigenous communities are not the only ones affected, and that he’d like to see initiatives to remember missing and murdered loved ones, that everyone can take part in.

The moccasins are to remain in the graveyard, for anyone who needs their support.

Based on a report by Stefanie Davis.