REGINA -- A one of a kind medical trial taking place at the Regina General Hospital is giving people living with Loin Pain Hematuria Syndrome (LPHS), an incurable disease that causes pain around the kidneys, the ability to live a normal life.

Dr. Bhanu Prasad, along with his team including Dr. Kunal Goyal, Dr. Francisco Garcia and Dr. Maryam Jafari, are conducting the renal denervation trial using a minimally invasive procedure. They have used the technique for several years, but the trial involves technology that has never been used for pain reduction in LPHS patients before.

LPHS pain comes from the kidneys but at this point, medical professionals do not know what causes the pain.

Dr. Prasad said about 0.013 per cent of people are believed to have LPHS.

Tiffany Zelionka was the first participant in the trial and received the procedure in early December. She first started experiencing pain in August 2018.

“Basically I thought I had a kidney infection,” Zelionka said.

After taking antibiotics for that and seeing no results, Zelionka went to the hospital several times where they completed numerous tests including CT scans and ultrasounds.

“Nothing was showing up. Everything was coming back normal and then I would feel good for a while and I’d get a month or a couple of months where I’d feel decent, and then all of a sudden I was back to having pain in my back again,” she said. “It kind of felt like somebody took a baseball bat to my back and was just standing there beating on my kidney.”

In June 2019, she went to see Dr. Prasad and he diagnosed her with LPHS.

At that point, Dr. Prasad still needed Health Canada approval for the trial he was hoping to start using new technology to reduce the pain for patients with LPHS.

After some back and forth between Health Canada and an ethics board, the approval finally came to start the trial.

In December 2020, Zelionka was the first person to undergo the procedure as part of the medical trial.

The procedure involves a radiologist inserting a catheter to access the kidneys, where radio frequency energy is released to kill nerves around the kidney that transmit pain to the brain. While the source of the pain is still there, the patient can no longer process the pain.

Patients are in hospital for a total of about four hours for the procedure.

“From the minute I woke up after the procedure I had no more pain left,” Zelionka said. 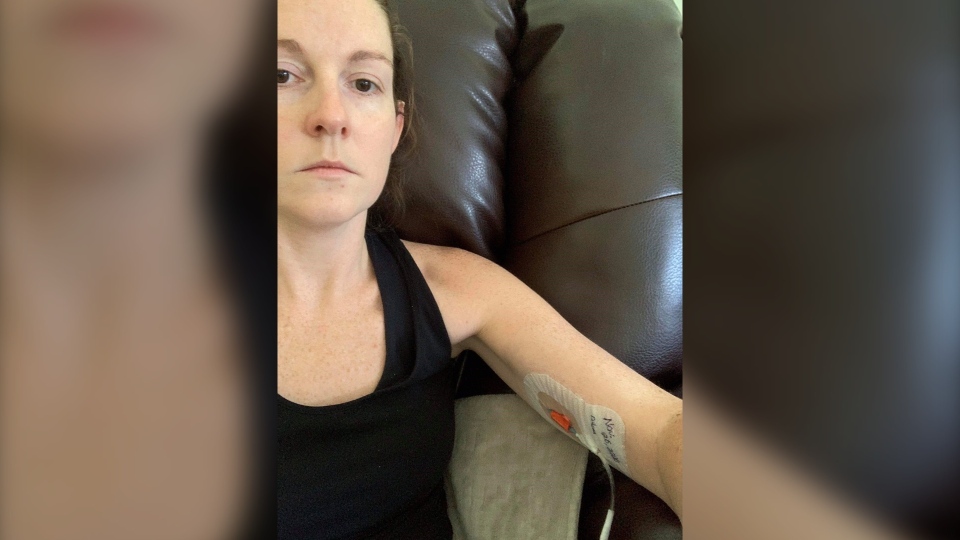 She said the pain has stayed away ever since.

“It was kind of getting exhausting to be constantly in pain. In two and a half years, I had somewhere around 25 admissions to the hospital and that didn’t count ER visits,” Zelionka said. “To just get back to normal life has been really nice, it’s been a relief.”

Dr. Prasad said it is possible for the nerve pathways to regrow and some pain could return. At this point, they’re unsure how long that takes.

“There is some degree of pain coming back, but no where close to what they had before the procedures were done,” Dr. Prasad said.

Zelionka is one of 13 patients taking part in the trial, which is a “randomized control trial.” That means half the patients in the trial will get a placebo procedure while the other half will get the real procedure.

The first three receive the real procedure, while the final 10 will be randomly split between the placebo and the procedure.

The first three patients have now received the procedure and are all reporting success.

“The first three patients are what we call the ‘roll ins’ to test the technology,” Dr. Prasad said. “Then five will get in and five won’t. It’s computer generated so we won’t know.”

Dr. Prasad said those who receive the placebo will be tracked for six months to see how they react to a placebo. They will automatically receive the real procedure.

He said the trial will likely last around 14 months and then they will see results. Depending on how this study goes and funding, he’s hopeful a larger study will be done in several centres around the world.

Regina is currently the only centre where this procedure is being done to cure pain in LPHS patients.

Dr. Prasad said funding is still needed to complete the study. While grants and philanthropy funding has been received, they still don’t have enough.

He said the Hospitals of Regina Foundation is accepting donations specially for the renal denervation research.

“By doing so, we can do bigger and better studies when it comes to denervation,” Dr. Prasad said. “Any degree of funding helps because there is no Big Pharma involved.”

Zelionka said she wanted to share her story to get the message out that there that there are options for people who are experiencing what she used to.

“It’s been a life changing thing for me and I know it can be for other people,” she said.