'All it takes is one': Sask. RCMP partner with Washington police to publicize disappearance of Mekayla Bali 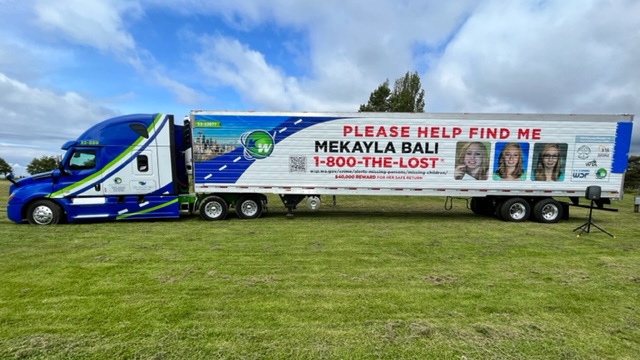 Saskatchewan RCMP and the Washington State Patrol announced a collaboration of efforts to locate Mekayla Bali, who was 16-years-old when she was last on April 12, 2016 in Yorkton.

Two semi trailers were unveiled at a Wednesday afternoon event in Blaine, Washington featuring pictures of Bali as part of the Homeward Bound program, according to a news release.

The program seeks to place age-advanced photos of missing persons on semi trailers that travel across North America, in an effort to keep the cases in the public’s mind and potentially generate new leads.

“Approximately 800 tips from all over the world have been reported to police in relation to our investigation into Mekayla’s disappearance, including tips and information reported from Washington,” said Cpl. Robert Head of the Saskatchewan RCMP Major Crimes Unit, who attended the event in Washington.

“These tips have been followed up on by investigators. Mekayla has not been found and is still considered missing.”

The venture is a partnership between multiple organizations on either side of the U.S/Canada border.

Washington State Patrol Chief John R. Batiste said the department was proud of the partnership and is looking forward to the potential progress on the case as a result of the program.

“Partnerships in missing persons cases occur regularly with border states and Canada, but it’s not an automatic process. It requires leadership, outreach and communications to make this happen,” said Batiste.

“We are proud of our close partnership with the RCMP, share their steadfast resolve in serving the public, and are hopeful that this particularly unique international collaboration can help find Mekayla,” explained Batiste.

The RCMP said it is grateful to have the initiative to keep Bali’s case in the spotlight.

“We thank Kam-Way Transportation, the Washington State Patrol and the National Center for Missing & Exploited Children for considering Mekayla Bali for the Homeward Bound program and collaborating on this important initiative,” said Cpl. Head in the release.

“All it takes is one key piece of information that will help push this investigation forward so we can bring Mekayla home to her family.”

Three months since their arrival through a special evacuation program, Ukrainian families with children receiving care in hospital share their experience.

'Be prepared for delays at any point': Canada not flying alone in worldwide travel chaos

As Canadian airports deal with their own set of problems amid the busy summer travel season, by no means are they alone.

Two people are injured and a third is in custody after what RCMP describe as a 'public shooting' at a rodeo in B.C. Sunday.

A Toronto woman says a dog she rescued from the Dominican Republic has been traumatized after being left in a corner of Toronto Pearson International Airport with baggage for about 21 hours.

After a metre of rain, 32,000 around Sydney, Australia, may need to flee

More than 30,000 residents of Sydney and its surrounding area have been told to evacuate or prepare to abandon their homes on Monday as Australia’s largest city braces for what could be its worst flooding in 18 months.

Amid buzz around the medical benefits of magic mushrooms, a new production facility gets to work in B.C.

In southern B.C, there's a new 20,000-square-foot production facility where one particular product is generating a lot of buzz: magic mushrooms, which a handful of businesses have been federally approved to produce.

First base coach Mark Budzinski is taking a leave of absence from the Toronto Blue Jays following the death of his daughter.