Almost there: 94-year-old Sask. senior close to completing walk from Saskatoon to Regina

A Saskatchewan senior walking from Saskatoon to Regina is closing on his final destination with a stop in Lumsden.

Frank Atchison, 94, started his “Where’s Frank Walk for Children” journey on April 15 and has walked about five kilometres each day.

Atchison, who has been a Shriner for nearly 50 years, is making the trek to raise awareness and money for the Jim Pattison Children’s Hospital Foundation and Shriners Hospitals for Children in Montreal.

On Tuesday, Atchison made it to Lions Park in Lumsden where he was greeted by students from École Lumsden Elementary School and community members. 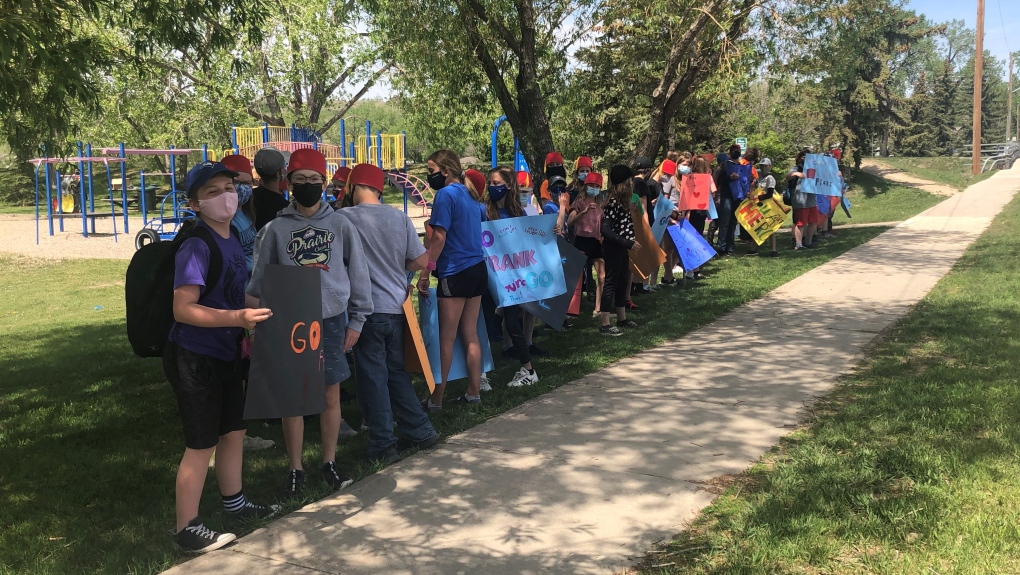 He said every stop has given him a warm welcome.

“Especially the school kids, to watch how their little minds are so intimate. You see them make signs that you would not have dreamt up what they come up with. It’s so nice,” Atchison said.

The students also presented Atchison with a cheque for $2,309, which they fundraised for the cause.

Atchison said his journey has been good, but also hard.

“The tougher the job, the better the feeling when you’re finished.”

One Lumsden family is grateful for all the work Atchison is doing.

Kim Lewis used the support of the Shiners to help get treatment for her son Matthew, who was born with a mild case of spina bifida.

“I know now that the Shriners is a resource and if anything is wrong, I just call Montreal and the Shriner in Saskatoon. They set everything up and we basically just show up,” Lewis said.

She added that she doesn’t think a lot of people in Saskatchewan know about the Shiners and she thinks it’s great that Atchison is doing this walk to bring awareness to their generosity.

“That’s what Shriners is all about,” said Atchison. “Every step we take, we take for a sick kid.”

Atchison will hit the road to Regina again on Thursday, but the Lumsden hill is one hurdle he is not looking forward to.

“The tough part is coming. I wish they had an escalator on that hill going up to Regina,” he said.

Atchison is scheduled to arrive at the WA WA Shriners Temple in Regina on June 15. A parade is planned to celebrate the end of the walk, Atchison’s 95th birthday and his 50-year anniversary as a Shriner.

More COVID-19 booster shots may be on the way -- but when it's your turn, you'll get an extra dose of the original vaccine, not one updated to better match the extra-contagious delta variant. And that has some experts wondering if the booster campaign is a bit of a missed opportunity to target delta and its likely descendants.

Colin Powell, the first Black U.S. secretary of state whose leadership in several Republican administrations helped shape American foreign policy in the last years of the 20th century and the early years of the 21st, has died from complications from COVID-19, his family said on Facebook.

Half of Canadian parents would vaccinate their 5-11 year-old ASAP: survey

With Health Canada expected to soon begin considering COVID-19 vaccine eligibility for children aged five to 11 years, a new survey by the Angus Reid Institute says that more than half of Canadian parents plan to give their kids the jab as soon as they get the green light.

The family of an Ottawa man who has been missing since Thursday is offering a $10,000 reward for tips that lead to him being found.

The Toronto homicide detective who solved the killing of Stefanie Rengel says he was left stunned by what the young woman charged with her murder revealed during her police interview.

Hudson's Bay Co. ULC is suing a Quebec retail family over the use of the Zellers brand. In a statement of claim filed in Federal Court, the company accuses the Moniz family of trademark infringement, depreciation of goodwill and so-called passing off -- the deceptive marketing or misrepresentation of goods.

The body of a Montreal firefighter who went under the water Sunday night assisting a boat in distress has been pulled from the water along with the boat he was trapped under.

COP26 Primer: Glossary of terms, issues ahead of climate summit

From Oct. 31 to Nov. 12, thousands of people will attend the COP26 climate summit in Glasgow, Scotland. CTVNews.ca has created a glossary of terms and issues that will come up during the UN climate talks.