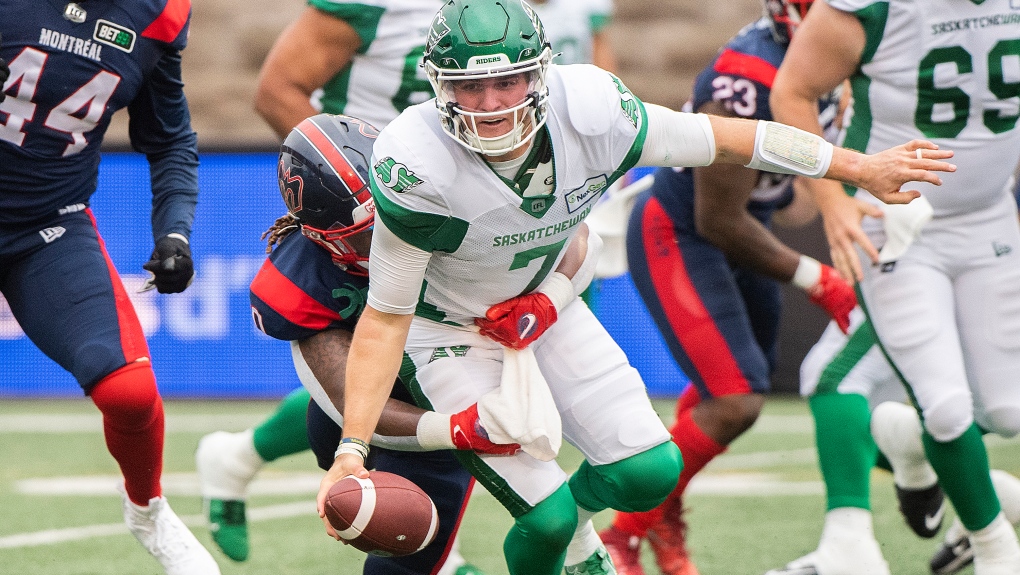 The Montreal Alouettes scored on the first play of Thursday's game against the Saskatchewan Roughriders en route to handing the Riders their first loss of the season.

Chandler Worthy cut and weaved his way through the Riders defenders foran 88-yard kick-off return touchdown. It was the second fastest touchdown to start a game in Canadian Football League history.

Trevor Harris started the game in place of starter Vernon Adams Jr., who tested positive for COVID-19 ahead of the game. In the second quarter Harris found Kaion Julien-grant for a 70 yard touchdown, extending Montreal's lead to 20-3.

Montreal's defence sacked the Riders quarterbacks a total of eight times as the Riders offense struggled to get anything going. Cody Fajardo completed 17 of 28 pass attempts for 191 yards and a pair of interceptions including a pick six by Marc-Antoine Dequoy, who caught a ball that deflected off a falling Duke Williams for the score.

Fajardo would be pulled from the game with less than two minutes to play in the final quarter, Mason Fine finding Williams in the back of an endzone for a touchdown.

Williams caught four passes for 101 yards in his return to the lineup, plus the late touchdown.

On the ground, Frankie Hickson led the rushing attack with 27 yards on six carries.

The Alouettes and Riders will face off for a second time at Mosaic Stadium on July 2. Kickoff is set for 5 p.m.

More than half of Canadians say the pandemic negatively impacted their children: report

A new report has found that more than half of Canadian parents report 'negative impacts' on their children after two years of living through the COVID-19 pandemic.

Increased loneliness, isolation a side effect of inflation for Canadian seniors

Canadian seniors are being forced to make tough choices, cutting out frills and nice-to-haves in the face of near 40-year-high inflation rates. But older adults also face a unique, less-talked-about challenge — the increased social isolation that experts say often occurs as a result of high inflation.

A 12-year-old player in the Little League World Series is in critical condition after falling from a bunk bed at the players' dormitory in Williamsport, Pennsylvania, his team tells CNN.

Having seen eight coaches come and go in less than 10 years, Manchester United fans know their false dawns. Wednesday shed a different light on strife at the giant football club: Elon Musk said he was buying it -- and then said it was all a joke.

Parents of young children may need a prescription for over-the-counter fever and pain medication due to a shortage at some pharmacies, Toronto's Hospital for Sick Children is warning.