'An insult to the families:' Sask. government wants out of Broncos lawsuit 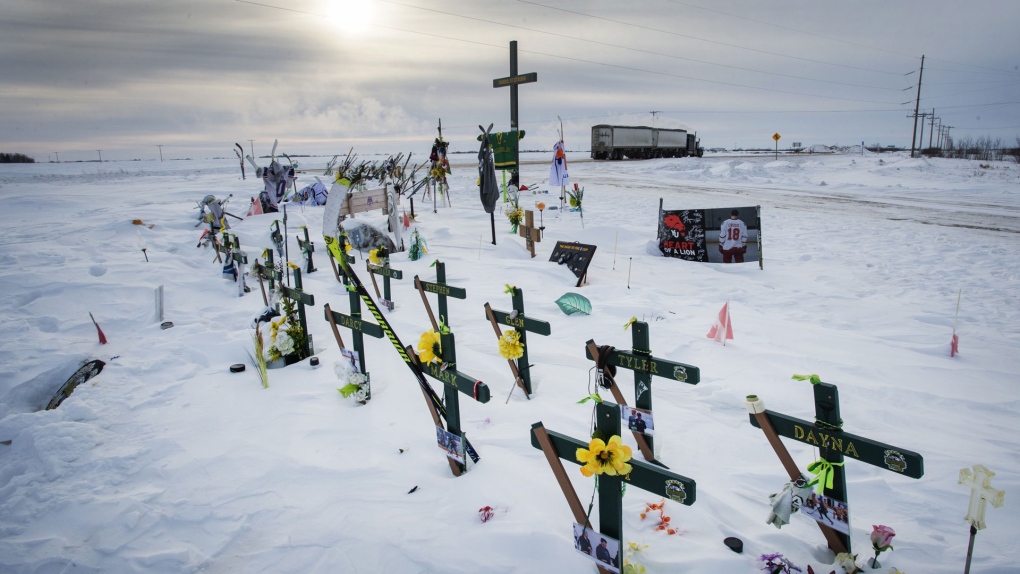 The memorial for the Humboldt Broncos hockey team at the site where sixteen people died and thirteen injured when a truck crashed into the team bus Wednesday, January 30, 2019 in Tisdale, Sask. THE CANADIAN PRESS/Ryan Remiorz

Lawyers for the Saskatchewan government are to be in a Regina courtroom Wednesday to ask a judge to remove the province from a lawsuit filed by families of victims of the deadly Humboldt Broncos bus crash.

But lawyers for the hockey families argue the province should accept responsibility for chronic inaction at the rural intersection where the crash happened in April 2018.

Sixteen people were killed and 13 others were seriously injured when the junior hockey team's bus crashed into a semi-trailer after the truck blew though a stop sign north of Tisdale, Sask. The inexperienced trucker, Jaskirat Singh Sidhu, was sentenced to eight years after pleading guilty to dangerous driving.

Among several lawsuits filed after the crash is one by the families of four players and an assistant coach who died. The families are suing Sidhu, the Calgary-based company that employed him, the bus company and the Saskatchewan government.

In its court notice, the government asks to be struck from the lawsuit because the province has no-fault insurance. That means a person receives comprehensive benefits no matter who's responsible for a collision, but the right to sue for pain and suffering is limited.

"No person has any right of action respecting, arising out of or stemming from bodily injuries caused by a motor vehicle arising out of an accident," reads the notice signed by government lawyer Michael Morris.

"Section 40.1 (of the Automobile Accident Insurance Act) extinguishes any right of action which may have otherwise been available to the plaintiffs."

"It's an insult to the families," Fox said in a phone interview. "I find it insulting that the government, rather than stepping up and doing the right thing, is continually trying to get out from underneath the very problem that they caused.

"They were amply warned by people who have experience, people who are civil engineers, who are trained and know how to construct and maintain highways."

Mellor said the intersection at highways 35 and 335 was identified as being dangerous in 1997, after a family of six from Dawson Creek, B.C., including a five-week-old, died after their vehicle was hit by a semi-trailer.

"The trouble with the Saskatchewan government is this really goes back to when the NDP government was in power and they just chose to do nothing about it," he said.

Fox and Mellor said there were recommendations from the RCMP, a coroner's inquest, and local politicians and engineers at the time who called for the intersection to be changed.

The recommendations included putting rumble strips on the highway, removing a large stand of trees that blocked sight lines and improving signage.

A large stop sign was added after the 1997 accident, the lawyers said. Rumble strips were added and the trees were cut back slightly following the Broncos crash.

"This will be a big day for us in court."

This report by The Canadian Press was first published November 3, 2020