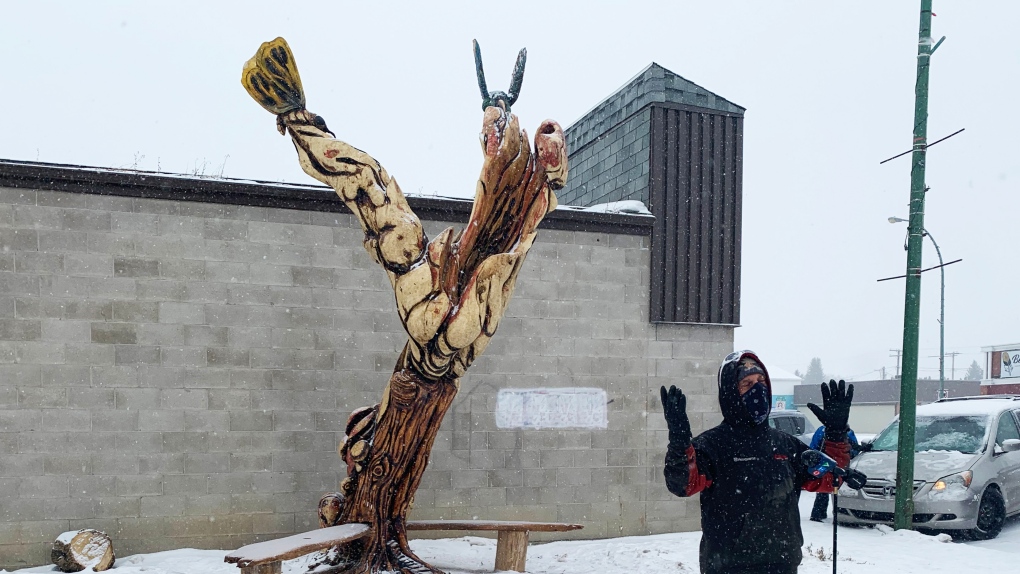 Douglas Lingelbach unveils a new art piece in Fort Qu'appelle on Nov. 19, 2020. The sculpture was created with a chainsaw. (Alison MacKinnon/CTV News)

FORT QU'APPELLE, SASK. -- This summer, Douglas Lingelbach used his chainsaw art to spread some much needed cheer in Fort Qu’Appelle.

His two week visit from B.C. turned into several months. In that time, he's been commissioned for more projects including a new piece that was unveiled on Thursday.

"The inspiration comes from the people, they came to me and asked if I could do something with this tree and I said ‘yes of course I can,’” the power carver said.

Lingelbach's latest creation is called out of love, made for the town's Mid Summer Arts Festival for their 25th anniversary. The piece was made from a broken maple tree in hopes to give it new life and meaning.

"When we hit 25 [years] we hit about 3300 people coming to our town. So we really wanted to give back to the town something that everybody could enjoy, all the volunteers, all the people who who've come and enjoyed the festival, it's great,” said Julie Bedel, the Chairperson of the Mid Summer’s Arts Festival.

While the people inspired the work, so did Lingelbach's family history. His grandparents lived in the Fort Qu’Appelle Valley when he was growing up.

“It comes from the love of my grandparents, they're from the valley so I had that vision in my mind and then the heart appeared on there. So that's Edith and Gus, still the lovers that they were. They were great people for the valley. So I’m very proud to be Lingelbach,” he said.

While he doesn't have plans to go anywhere else just yet, when he does, he'll be happy to leave a part of himself in the valley to help attract other visitors.

“We hope we can entice Doug to stay around for a lot longer and make our town known as the valley of festivals and the valley of wooden sculptures,” Bedel said.