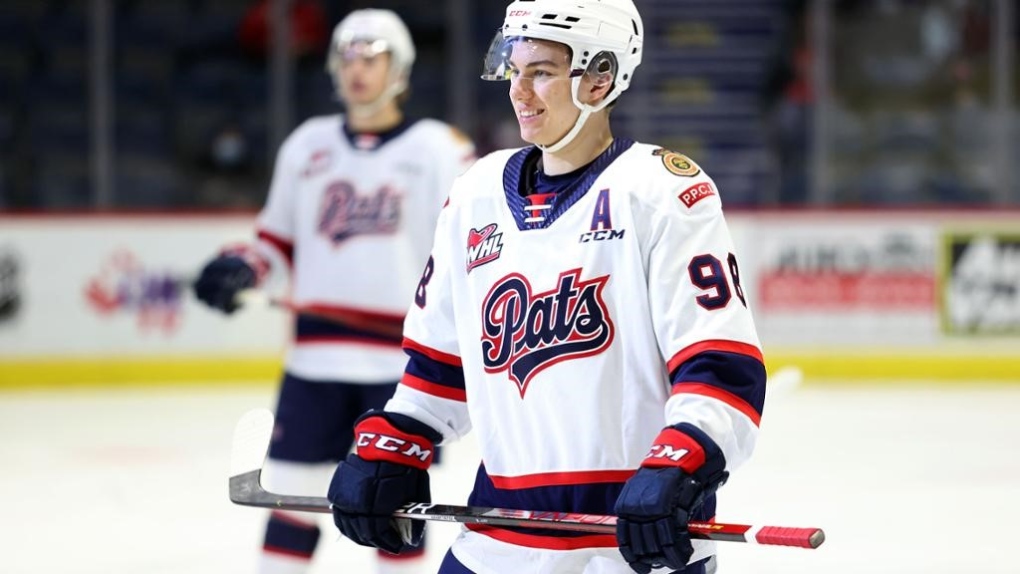 Bedard broke not one, but two team records during the Pats' Friday night matchup against the Swift Current Broncos. (Courtesy/ NHL.com)

Connor Bedard broke a pair of franchise records on Friday night in the Regina Pats’ 4-2 win over the Swift Current Broncos. The victory helps keep the team’s slim playoff chances alive, now just four points back of the Broncos for 8th in the eastern conference.

Bedard scored his 46th of the campaign late in the middle frame, shorthanded on a backdoor feed from Tanner Howe.

That goal elevated Bedard to top spot in franchise history for goals by a 16-year old, surpassing Jeff Friesen’s mark set in the 1992-93 season.

But Bedard was not finished. He’d later add an empty net goal for his 47th goal and 89th point, which broke Doug Wickenheiser’s mark for points by a 16-year-old of 88 set in the 1977-78 season.

“To be a part of and see where Connor (Bedard) is right now, I think is going to be special.” Pats assistant coach Brad Herauf said following the contest. “I think it’s going to be a long time before someone breaks his records.”

The victory was an important one for the Pats who are trying to keep their playoff hopes alive.

They’re now four points back of the Swift Current Broncos for 8th in the Eastern Conference with four games remaining on their schedule. Pats captain Logan Nijhoff, who scored the game winning goal in Friday night’s victory over Swift Current has signed a two-year contract with the American Hockey League’s San Diego Gulls and will join the team following the completion of the Pats season.

The Regina Pats host the Prince Albert Raiders on the evening of April 9th at the Brandt Centre. Opening face off is scheduled for 7 p.m.

Bank of Canada's rapid rate hikes likely to cause a recession, study finds

The Bank of Canada's strategy of rapidly increasing its key interest rate in an effort to tackle skyrocketing inflation will likely trigger a recession, a new study from the Canadian Centre for Policy Alternatives (CCPA) says.

A shooter fired on an Independence Day parade from a rooftop in suburban Chicago, spraying the crowd with gunshots initially mistaken for fireworks before hundreds of panicked revellers of all ages fled in terror. At least six people were killed and at least 30 wounded.

Travelling soon? Here's how to have a stress-free airport experience

A day after Russian President Vladimir Putin declared victory in seizing an eastern Ukraine province essential to his wartime aims, a city in the path of Moscow's offensive came under sustained bombardment, its mayor said Tuesday.

Saving for retirement is becoming out of reach for young Canadians

The 17-year-old daughter of the Toronto Blue Jays' first base coach died in a 'terrible accident' while tubing in the U.S. this weekend.

A new U.S. study shows that in high-trust neighbourhoods, those with a larger dog population had robbery rates that were almost two-thirds lower and murder rates that were cut in half.

Climate change protesters targeted a copy of Leonardo da Vinci's 'The Last Supper' at London's Royal Academy of Arts Tuesday, gluing themselves to the painting's frame and spray-painting 'No New Oil' next to it.

Tamara Lich, an organizer of the 'Freedom Convoy,' is set to appear in an Ottawa court today for a bail hearing after being arrested last week for allegedly breaching one of her bail conditions.