REGINA -- A Regina man gave his remote’s rewind button a workout, after closely studying a two-frame shot of a historic Saskatchewan landmark, in the opening sequence of the hit show “Big Bang Theory.”

The hit CBS sitcom, which aired for 12 years from 2007 to 2019, features a photo of a building known as the home of the Leader Newspaper on Victoria Avenue between Hamilton and Rose Streets.

According to the Saskatchewan Archives, the photo dates back to 1885.

The first owner of the building, Nicholas Flood Davin, is shown in the centre of the image with a top hat and walking stick. 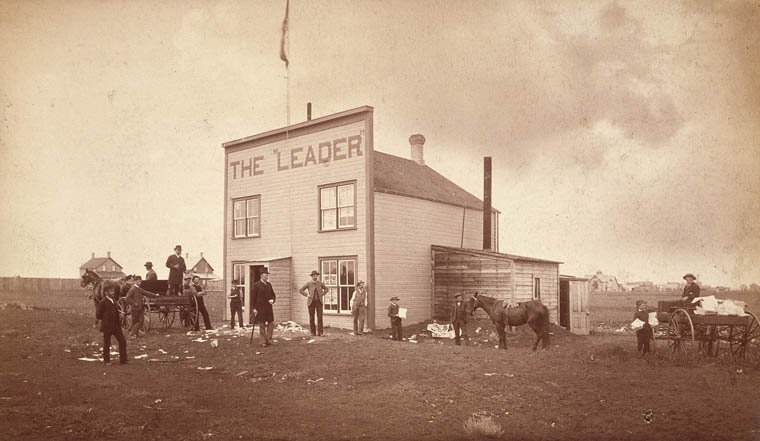 The picture was taken by Oliver B. Buell, an American photographer, who photographed the Northwest Rebellion and Louis Riel's trial.(O.B. Buell / Library and Archives Canada)

Leader eventually merged with the Regina Evening Post in 1930 to become the Regina Leader-Post.

John Strother-Stewart said he has been watching ‘Big Bang’ for about three years, but on Thursday he recognized the familiar image.

“I thought wow! You know you’ve got pictures from all over the world and a lot of ancient civilizations and pictures of famous inventors and art work,” Strother-Stewart said.

The picture is hard to see, even if you know what to look for. The opening credits follow a timeline of events throughout history, showing numerous images each second. The image of the Leader building only appears for about two frames.

He recognized the building immediately, after having worked on a diorama project about 40 years ago, for the Regina Plains Museum now known as the Civic Museum of Regina.

“All of a sudden something struck me as being very, very familiar,” Strother-Stewart said.

Although Strother-Stewart doesn’t see the image each time, he is happy to know there’s a hint of the queen City in each episode.

“This just came completely out of the blue and I’ve been watching that program probably for a good three years,” Strother-Stewart said.

It is unknown why this specific image was used for the show, but Strother-Stewart said the show has several references to Canada and creator Chuck Lorre may have a love for the Great White North.