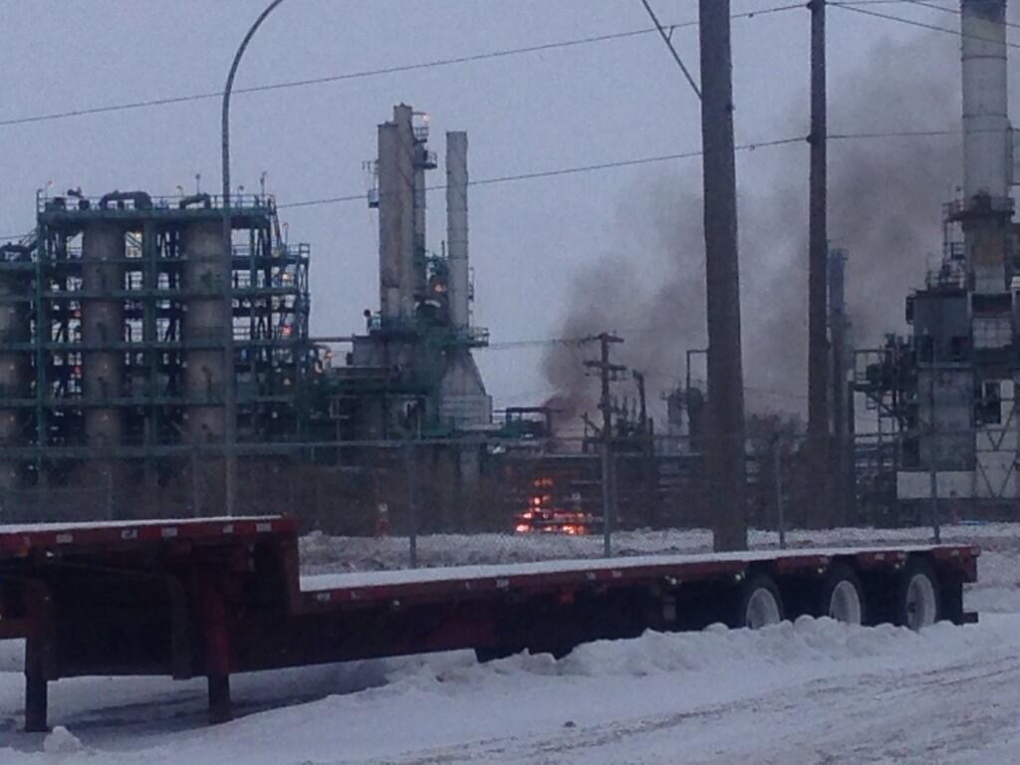 Several pictures of the fire at the refinery were shared on Twitter on Tuesday, Dec. 24, 2013. (@michellesmk2 / Twitter)

An explosion at a refinery in Regina rocked the city and beyond on Christmas Eve, and fortunately, no one was injured.

People heard an explosion from the area of the Federated Co-op refinery in the north end of the city around 3:30 p.m. local time.

"I'm a mile away from it and my house shook, the front window shook, my Christmas tree shook; scared the heck out of all of us," said resident Larry Shrader.

Regina deputy fire chief Gerard Kay said in a tweet that "all personnel accounted for and no injuries reported."

Federated Co-op later confirmed the good news that everyone was OK.

"ALL credit goes to our team at the refinery for keeping everyone safe and things under control," it said.

Kay also said that the fire was 95 per cent contained and the refinery's fire department handled the situation.

The blast could be heard and felt all over Regina and outside the city as well.

"From out here, we heard it and was like, 'What the heck's that? And then my son called me shortly after because he was on his way in to the city and they were right by the refinery and he said his whole truck just shook and they felt the vibrations in their chest," the woman said.

"Glad to hear all personnel have been accounted for at the Co-Op refinery in Regina. Please stay safe EMS crews," Harper said.

Wall said: "Praying for everyone at the Co-op Refinery. Hope all are safe."

It's the fourth fire in about two years at the refinery.

In February, a fire in a coker unit sent flames shooting nearly 20 metres in the air, but was quickly brought under control.

In October 2011, corrosion in a pipe triggered a fireball that sent seven contract workers to hospital and forced 1,400 workers from the facility.

In May 2012, a much smaller fire occurred when an overheated crude oil pump ignited. There were no injuries.