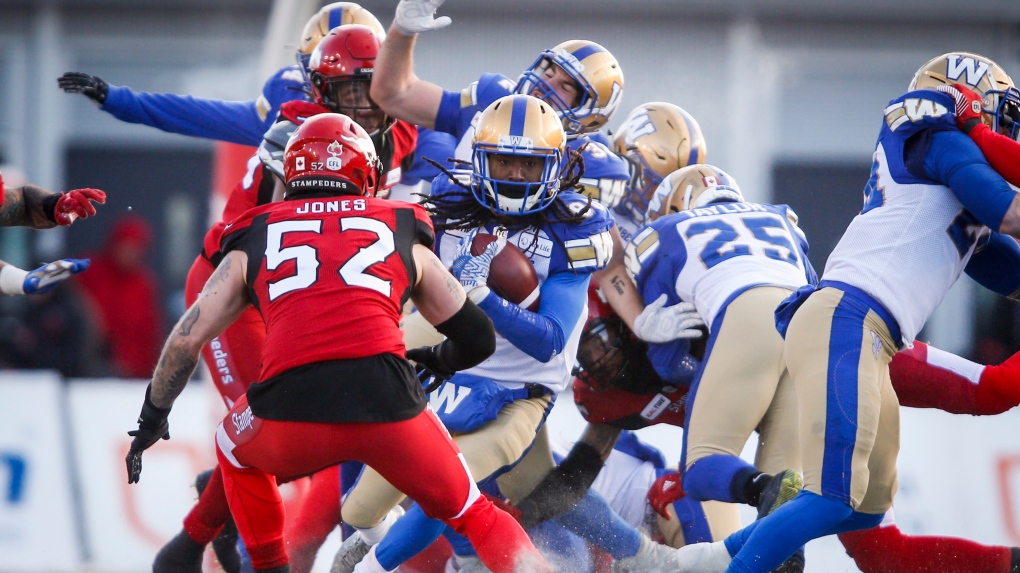 CALGARY -- The Winnipeg Blue Bombers advanced to the CFL's West Division final with a 35-14 win over the Calgary Stampeders in Sunday's semifinal.

The Blue Bombers travel to Regina to face the Saskatchewan Roughriders in next Sunday's West final.

The victor there represents the West in the Grey Cup in Calgary on Nov. 24.

Reggie Begelton scored two touchdowns for the host Stampeders, who won last year's Grey Cup but will not defend their title on home turf this year.

The Edmonton Eskimos (8-10) crossed over from the West to beat the Montreal Alouettes 37-29 earlier Sunday in the East Division semifinal.

The Esks take on the Hamilton Tiger-Cats in next Sunday's East final.

A Roughrider to start the season, Collaros was traded twice and arrived in Winnipeg on Oct. 9 via the Toronto Argonauts.

Streveler had taken over as Winnipeg's starter when Matt Nichols went down with a shoulder injury in August.

An ankle injury sidelined Streveler in the regular-season finale, but he returned Sunday to lead the Bombers in rushing yards with 82 yards.

Winnipeg faced Calgary in a third straight game Sunday. The Bombers had a bye week after splitting 1-1 with the Stampeders to cap their regular season.

Trailing 14-8 at halftime, the Bombers scored 27 unanswered points in the second half in front of an announced 24,278 at a chilly McMahon Stadium.

Morning snowfall halted and gave way to partly cloudy skies at kickoff with a temperature of minus-14.

Mitchell was intercepted on consecutive drives in the fourth quarter by Nick Taylor and Mercy Maston respectively.

Calgary turned the ball over on downs with just over three minutes remaining in the game.

Streveler scored a 24-yard rushing touchdown at 8:35. Medlock's 42-yard field goal at 7:23 hit the right upright, but made it through for the three points.

Jerome Lorenzo's 53-yard punt return had Calgary starting in Winnipeg territory late in the first half. Mitchell and Begelton's combined on a 19-yard catch and run for a 14-5 lead.

But the Bombers trailed by a touchdown at the half following Medlock's 52-yard field goal.

Under pressure in the end zone early in the second quarter, Mitchell was called for intentional grounding when he threw the ball away.

Winnipeg's 47-yard pass interference penalty gave the Stampeders the ball at the four-yard line on Calgary's opening drive of the game.

Mitchell had aired the ball out to a sprinting Josh Huff. Winnipeg's Mike Jones was called for the infraction.

On a third-and-one, Stampeder backup quarterback Nick Arbuckle handed off to Begelton. He eluded both Jonathan Kongbo and Willie Jefferson taking a wide route to the end zone to score.

This report by The Canadian Press was originally published on Nov. 10, 2019