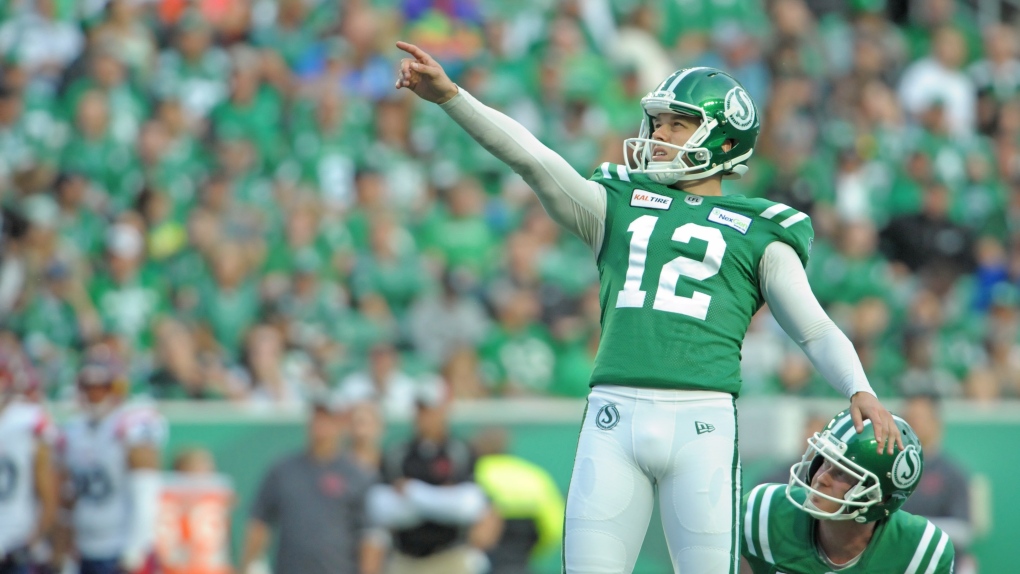 Saskatchewan Roughriders kicker Brett Lauther reacts after hitting a field goal against the Montreal Alouettes during first half CFL action in Regina on Saturday, Sept. 14, 2019. THE CANADIAN PRESS/Mark Taylor

REGINA -- Fortunately for the Saskatchewan Roughriders, Brett Lauther has a short memory.

Having missed a couple routine kicks earlier in the game, Lauther came through in the clutch and gave the Riders another last-minute victory, a 27-25 triumph over the Montreal Alouettes on Saturday.

"I wanted to come through for the guys. I definitely owed them," said Lauther, who provided the game-winning points with his 39-yard field goal with 25 seconds remaining. "I had a tough night. I just wanted to be there for them at the end."

Cody Fajardo marched the offence 54 yards to set up Lauther's heroics. Fajardo completed all three of his pass attempts for 37 yards and added an eight-yard run on the decisive drive.

Then it was time for Lauther to step up. He had missed a 33-yard field goal and a convert previously.

"I need to make that one, especially after I put us in a bad spot earlier. I just needed to execute like I knew I could," Lauther said. "I'm gonna miss more (field goals) this year and in other years and if you don't move on it's always going to be dwelling on you and putting your team in a bad spot. I just moved on and I knew I could make that one at the end."

It was the second consecutive home game that Lauther provided late-game drama. Two weeks ago in the Labour Day Classic versus Winnipeg, he kicked a game-winning field goal as time expired.

"Everybody is always believing that we're going to get it done even if we're backed up," said Riders running back William Powell, who scored two touchdowns on Saturday. "We have showed that time and time again and I feel we'll continue to do that."

"There's a sense of familiarity," added Riders head coach Craig Dickerson. "And I feel the guys really believe in each other."

With the win, the Riders improved to 8-4. The loss snapped Montreal's three-game winning streak and dropped the team to 6-5.

Powell's five-yard run early in the fourth quarter gave the Riders a 24-18 lead.

A major Montreal miscue set up the Saskatchewan score. Punter Boris Bede fumbled the snap on a punt attempt and was tackled at his 19-yard line.

Two plays later, Powell was in the end zone.

The Alouettes counterpunched on the ensuing possession when Vernon Adams Jr., threw a 27-yard touchdown strike to Eugene Lewis. The Alouettes led 25-24 with eight minutes remaining in regulation.

"It stings, especially after we thought for a minute that we had it," Adams Jr., said of the last-minute defeat. "But that's the good thing about the CFL -- you just never know. You just have to finish a little bit better."

Adams Jr., referred to the three Montreal possessions in the early stages of the game when the offence was forced to settle for three field goals from Bede after it had marched the ball into the red zone.

"If we turn those field goals into seven points we're not even in that position (at the end of the game)," he said after he threw for 344 yards and completed 22-of-36 pass attempts.

"If we turned those nine points into 21 points then it's a different ball game. I think we missed out on some opportunities," Lewis added.

Lewis led the Alouettes with eight catches for 130 yards and one touchdown.

Powell rushed for a game-high 94 yards on 15 carries. He added three receptions for 30 yards.

Cody Fajardo completed 19-of-27 pass attempts for 254 yards and one touchdown.

The Alouettes led 9-0 midway through the second quarter.

Saskatchewan closed the first half with 10 unanswered points and took a 10-9 lead into halftime.

Fajardo connected with Powell for a 10-yard touchdown and Lauther booted a 14-yard field goal.

William Stanbeck rushed four yards for a touchdown and DeVier Posey caught the two-point convert from Adams Jr., and Montreal restored a lead at 17-10 midway through the third quarter.

The Riders answered when Fajardo marched the Riders on a 62-yard scoring drive late in the third quarter. Fajardo raced seven yards to the corner of the end zone and added the two-point convert to knot the score at 18-18.

Saskatchewan's Charleston Hughes, the CFL sack leader, did not play due to nagging elbow and knee soreness.

Next up for the Alouettes is a home date next Saturday afternoon with the Winnipeg Blue Bombers visiting. Saskatchewan will enjoy a bye week.