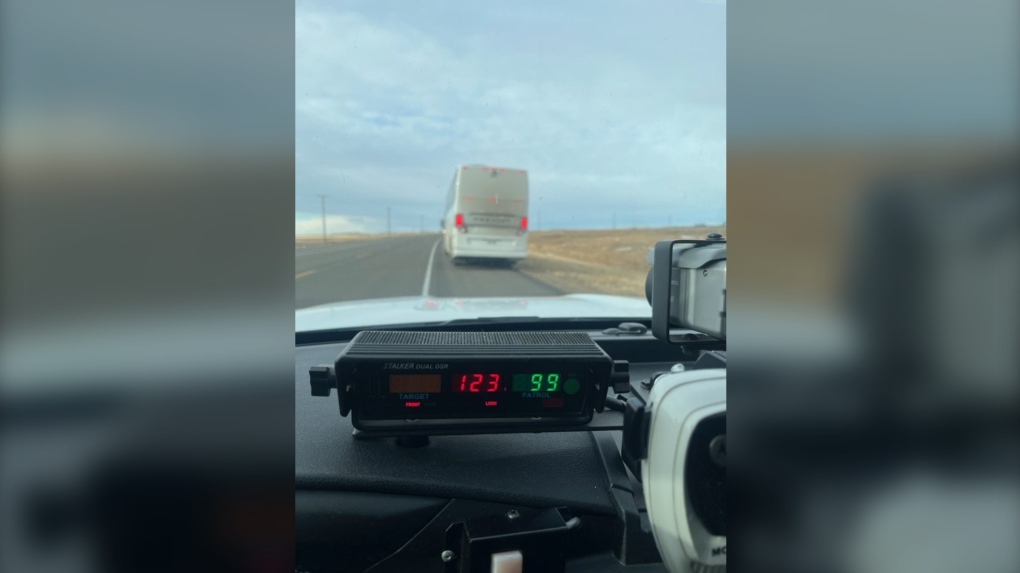 A bus driver was caught travelling 123 km/h in a 100 km/h while not not wearing their legally required glasses while driving. (Combined Traffic Services Saskatchewan)

Police near Regina caught a bus driver travelling well over the posted speed limit and not wearing their required glasses.

Combined Traffic Services Saskatchewan (CTSS) reported that officers caught a bus travelling 123 km/h in a 100 km/h zone at around 1:30 p.m. on Nov. 27.

The bus driver was not wearing glasses or contacts while driving which were required by the restriction placed on their license, police said.

Police reported that the driver was transporting 47 passengers at the time of the stop.

The bus driver was not only speeding (123 in 100) but was not wearing glasses or contacts while driving as required by the restriction on his/her driver's license. There were 47 passengers on the bus at the time. We expect more of professional drivers.@reginapolice pic.twitter.com/rePb8HDU2R

Girl, 6, dead after accident at ski resort north of Montreal on Sunday

Hockey Hall of Famer Bobby Hull has died at the age of 84. He played for the NHL's Chicago Blackhawks and Hartford Whalers as well as the World Hockey Association's Winnipeg Jets over a 23-year pro career.

Are you a Ukrainian who recently moved to Canada? We want to hear from you

With Russia's invasion of Ukraine displacing millions of people, many refugees have begun to lay their roots in Canada. If you or someone you know has fled the war-torn country and settled in Canada, we want to hear from you.

Marc Ouellet, the Quebec cardinal who oversaw the Vatican's powerful bishops' office and has been recently accused of sexual misconduct, is retiring.