Despite not playing for the Grey Cup this year, the green and white faithful are showing up to the party.

On Thursday evening, hundreds of fans flocked to Riderville, one of six team party rooms set up at the REAL District.

“Win, lose or draw—it doesn’t matter what our season is, we’re Rider fans regardless. We’re going to show up and enjoy ourselves,” one fan named Darryl said.

Darryl and his brother Darrel have attended 21 Grey Cup Festivals together. They admitted those aren’t their real names, but they go by them as part of an ongoing joke at every Grey Cup.

The brothers said Riderville is like a big family reunion and meet-and-greet rolled into one.

“There’s always a few thousand people I haven’t met yet so I have to get out and talk to them and find out what their vibes are,” Darrel said.

Team party rooms are a staple of any Grey Cup Festival. 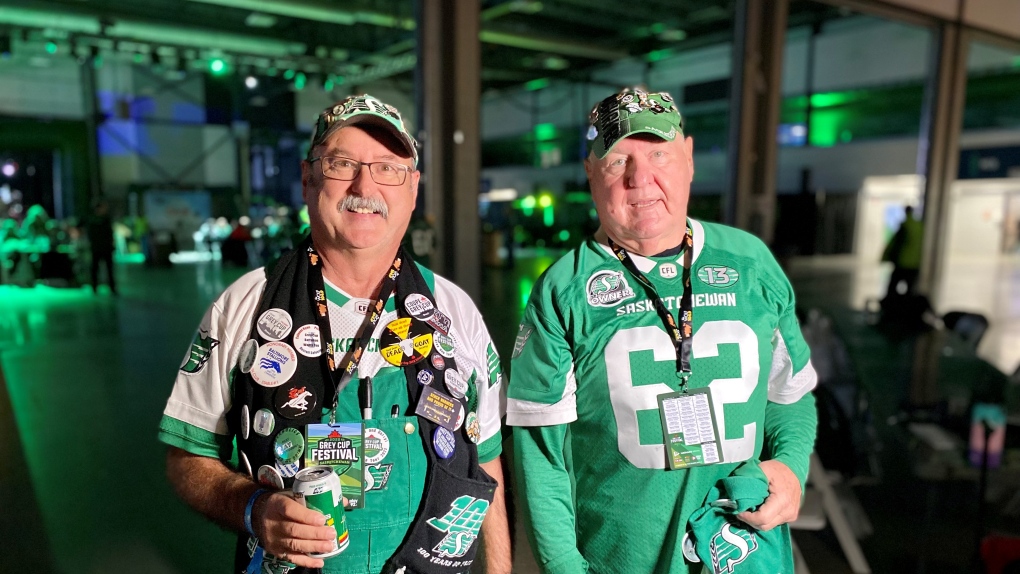 All party rooms are located in the Co-operator’s Centre, except Riderville, which is in the Viterra International Trade Centre. It spans three halls, making it not just the biggest party room of the festival, but the biggest Riderville, yet, according to organizers.

“Everyone comes here just to enjoy that camaraderie of CFL football. Everyone wears their team colours and they just come out to have a great time,” said Paula Kohl, a member of Grey Cup Festival Volunteer Host Organizing Committee.

“There are bands playing, there is hourly entertainment, the cheer teams are coming through, so you could stay here from start to close and be entertained the whole time.”

The east coast party room brings one of Newfoundland’s famous traditions to the prairies: the screech-in ceremony.

“It is an experience I will tell you,” Kohl said.

“If you’ve ever been in Atlantic Canada, the old kiss the cod and drink the screech? I challenge you to go try it.”

Five brave fans were the first ones to officially be “screeched in” at the festival, which means they recited a poem before kissing a frozen cod and drinking a shot of screech rum.

At least 25 screeching-in ceremonies will take place over the weekend. Fans must donate to the food bank in order to be selected for the ceremony.

Team party rooms run until Saturday. They close at 1 a.m. each night.

An oil spill in a creek in northeastern Kansas this week is the largest for an onshore crude pipeline in more than nine years and by far the biggest in the history of the Keystone pipeline, according to federal data.

No decision on landfill search, Winnipeg Police Board considering outside help

Decisions on next steps in a potential search for the remains of two Indigenous women believed to be at a landfill outside Winnipeg are being worked through with the option of bringing in outside help.

Health Canada approved a COVID-19 vaccine booster for children on Friday that targets more recent variants of the coronavirus, along with the original strain.

Canadians and small businesses sending parcels this holiday season may be surprised to see a steep surcharge on domestic shipping due to the high price of diesel.