A Canadian researcher is defending her data showing COVID-19 deaths across the country could be under-reported by at least 50 per cent after Saskatchewan’s premier claimed it was “misinformation.”

Tara Moriarty, an infectious disease researcher and associate professor at the University of Toronto, has been studying excess deaths in Canada and their relation to COVID-19.

Moriarty helped author a report for the Royal Society of Canada, which looked into excess deaths from February to November 2020. The report defines excess deaths as the difference between the observed and expected number of deaths during a specific period.

Based on that data, she suggests Saskatchewan’s COVID deaths could be seven times higher than the number being reported.

“That simply is nothing more than misinformation and it should be challenged,” Premier Scott Moe stated in a press conference on Monday.

As of Tuesday, Saskatchewan had 977 reported COVID-19 deaths.

Outside of Quebec, Moriarty said COVID deaths are underreported by at least 50 per cent in the rest of the country. She said the percentage of underreported deaths in Saskatchewan and British Columbia is higher.

“Going forward, it is possible that number might still come down, but we don’t know for sure,” Moriarty said, adding there won’t be a clear picture of COVID-19 deaths for another two years.

She points to delays in death reporting, which are a common problem across Canada, as a leading factor in the discrepancy.

According to Moriarty, Saskatchewan’s death reports are 95 per cent complete up to February 2020. From the start of the pandemic until now, only 72 per cent of death reports have been completed and reported to the National Vital Statistics database.

She said that translates to at least 5,000 incomplete death reports since the beginning of the pandemic.

“There are still more deaths coming in from the first wave period,” she said.

Moriarty estimates we won’t know a true death toll from the first wave until June or July of this year. 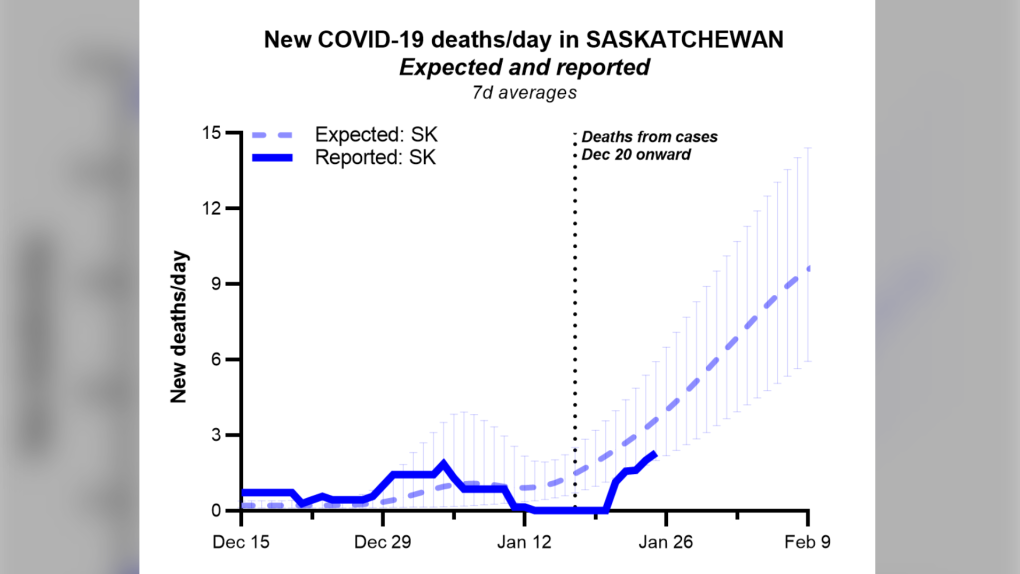 Based on infection rates, vaccinations and global data collected throughout the pandemic, Moriarty said researchers are able to project the number of “expected” COVID-19 deaths for different age groups. She said Saskatchewan’s reported numbers are “substantially lower” than expected.

“Saskatchewan’s reported numbers are at least half of what they should be,” Moriarty said.

Saskatchewan’s COVID-19 death reporting is based on a standard used by public health reporting throughout Canada, according to Provincial Emergency Operations Centre (PEOC) officials.

In Saskatchewan, COVID-19 deaths are a result of a clinically compatible illness in a COVID-19 case, unless there is a clear and immediate alternative cause of death that cannot be related to the virus, such as trauma.

The reported cases would have tested positive for COVID-19 on a PCR test.

According to PEOC, these deaths are reported on a “priority basis” into Saskatchewan’s health database based on reports from medical health officers, directors of care in long-term care settings, and staff in acute care systems.

Moriarty said Saskatchewan’s limited PCR testing and lack of post-mortem testing make it difficult to determine an accurate number of COVID-related deaths in the province.

“If someone hasn’t been tested before, then even if they die from COVID they wouldn’t be reported as dying from COVID, because there is no laboratory test to go with it,” Moriarty said.

Quebec and Manitoba are the only provinces that perform post-mortem tests. Those two provinces have the highest COVID-19 death rates per 100,000 in the country. Saskatchewan has the third highest.

Prior to the pandemic, Saskatchewan’s five-year average for deaths of all causes was 9,502, according to Statistics Canada.

“For someone to indicate that the majority of those (deaths) are due to COVID is just simply nothing short of some of the most egregious misinformation I’ve seen throughout this pandemic,” Moe said.

According to a government statement issued Tuesday, “The premier and government have full confidence the data compiled and released by Saskatchewan health care officials is accurate.”

Moriarty stands behind her research. She said Moe is doing a “great disservice” by passing off the data.

“A government should want to have accurate information when making decisions if their intention is to protect the people they represent.”

Moriarty said she is open to meeting with government officials to help explain her research and how it could be used to prevent further deaths.

To date, she said officials with Quebec’s ministry of health are the only government officials to reach out for advice.

Moriarty is expecting another 45,000 new COVID-19 deaths in Canada before the pandemic is over. She estimates about 26,000 of those will be reported and 10,000 will be in those who are unvaccinated.

According to her research, she estimates third doses have saved around 15,000 Canadian lives, which is why she is encouraging everyone to get vaccinated and boosted.

A man who used a sword to kill and maim victims in Quebec City's historic district on Halloween night 2020 has been found guilty of murder.

Rising global temperatures could reduce the amount of sleep people get every year, according to a new study.