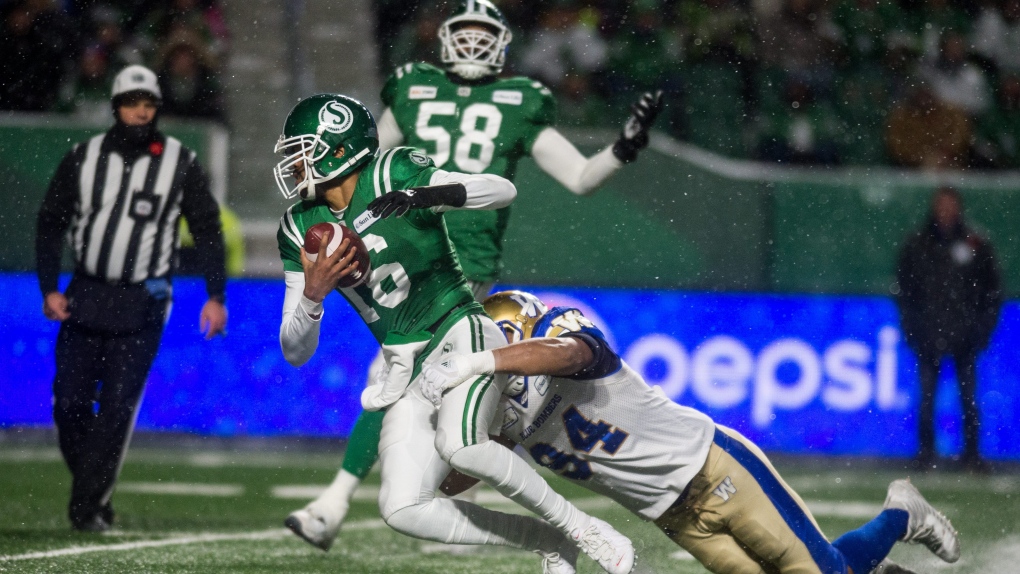 Collaros did not dress in the CFL West Division semifinal against the Blue Bombers, a game that Winnipeg won 23-18 to advance to the West final next weekend in Calgary. Jones made the decision less than 24 hours before kickoff on Sunday after Collaros told him something was off.

Instead, Brandon Bridge started at quarterback for the Riders. He was tapped as the starter earlier in the week, as Collaros' status remained questionable.

The scenario reminded Jones of earlier in the season when Collaros missed four games after he suffered a concussion in Week 2 against the Redblacks.

Jones said Collaros returned from the Riders' bye week healthy after he absorbed a brutal helmet-to-helmet shot from Odell Willis in the team's final regular-season game on Oct. 27 versus the B.C. Lions.

"(Collaros) was cleared, so on paper he could go. I just did not (feel comfortable playing him)," said Jones. "It was kind of a revisit from the Ottawa week, and I just was not going to risk it."

On Sunday, Bridge completed 12-of-22 passes for 100 yards. He also carried the ball five times for team-high 86 yards. Though the Riders were unable to find the end zone until late in the fourth quarter. Nick Marshall scored on a one-yard run.

"I feel like we left some plays on the field and we just needed make them," said Riders receiver Naaman Roosevelt. "It comes down to execution. Things like blocking, catching the ball, running the right routes and making those plays is what it comes down to. Whoever is (at quarterback) just has to execute what is being called."

Could a healthy Collaros have made a difference?

"That's hard to say," Jones said. "Brandon did a really nice job standing in for him. (Winnipeg) pressured a lot and who's to say that either guy would have been any better?"

Saskatchewan's Willie Jefferson said it was one play that separated the Blue Bombers and Riders on Sunday -- a two-yard touchdown run from Andrew Harris with five minutes remaining in the game, a score that put the visitors ahead 23-12.

The Riders' offence, instead, settled for four field goals from kicker Brett Lauther.

"We had our opportunities," Jones said. "If we just could have got one of those balls in for a touchdown it might be a little different."

For the second consecutive game, a helmet-to-helmet hit on a Roughriders quarterback had CFL fans buzzing after the game's conclusion.

With the Riders trailing 23-18 in the final minute of play, Bridge was crushed by a hit from Winnipeg's Jackson Jeffcoat after a pass downfield. Bridge stayed motionless on the turf for a few minutes before he walked off under his own strength.

There was no penalty on the play.

CFL commissioner Randy Ambrosie Twitter after the game that the hit on Bridge was "a missed call."

"Watching this occur and seeing via the ref cam that the on-field referee's view was blocked, my reaction is we need to look this off-season at allowing the Command Centre to make the call on plays such as this one, clear matters of player health and safety. We need to do more than admit an error. We need to search for a solution."