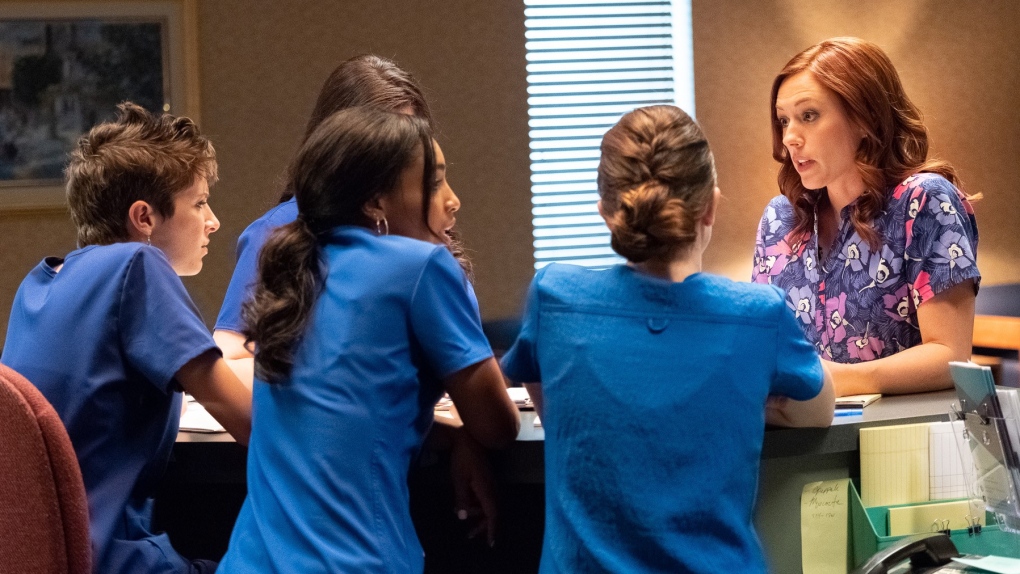 Actor Ashley Bratcher (right) is shown in a scene from the film "Unplanned." (THE CANADIAN PRESS/HO-Soli Deo Gloria Releasing)

The Regina and Saskatoon locations of theatre chain Cineplex will both screen the anti-abortion film "Unplanned".

The two Saskatchewan locations are among 13 other theatres operated by the chain screening the movie, according to a response sent by Cineplex to CTV News.

Ellis Jacob, president and CEO of Cineplex, has released a statement that follows up comments the company made last week to The Canadian Press about the film's release.

The American drama, based on the true story of a Planned Parenthood clinic director in Texas who becomes an anti-abortion speaker, will screen in 14 Cineplex theatres in Canada for a week beginning Friday.

It will also screen in 10 Landmark Cinemas as well as some independent theatres in Canada, after a U.S. release that stirred up intense debate on both sides of the issue.

Jacob says showing controversial films on the big screen is not new to him, Cineplex or the industry as a whole, and he's confident the company made the right decision.

He adds it's important to remember that Canada is a country that values freedom of expression, and that audiences can decide whether or not they want to see the film.

"When I immigrated to Canada back in 1969, one of the things that I loved, and still love, the most about living here was that we didn't shy away from our differences -- we embrace them," Jacob, who was born in India, said in the statement issued Monday.

"Canada is a country that believes in and rallies behind freedom of expression, but that isn't always an easy thing to do and it certainly doesn't always make you popular.

"In this instance many of us will have to set aside our own personal beliefs and remember that living in a country that censors content, opinions and points of view because they are different from our own is not a country that any of us want to live in."

Jacob also noted that the responsibility of determining whether content is appropriate for movie audiences and setting age parameters falls to provincial and territorial governments, through film classification boards.

"I understand and can appreciate the concerns about the film, but it is up to each of us to decide whether or not we want to see it," Jacob said.

"In Canada, we have that option and I think it is an important thing to remember."

"Unplanned" is being distributed in Canada by Fredericton-based Cinedicom, which is run by BJ McKelvie, who is also a pastor.

The Abortion Rights Coalition of Canada has called the film "a dangerous piece of anti-abortion propaganda" that "could incite fanatics to commit acts of harassment or violence against clinics or doctors."

Jacob said Cineplex has received many phone calls and emails from Canadians on both sides of the conversation.

Salmar Theatres in Salmon Arm, B.C., says it has cancelled a planned five-day screening of the film after staff allegedly received threats.

And The Movie Mill in Lethbridge, Alta., is planning to beef up security for its "Unplanned" screenings after "a vocal negative opposition, who have indicated on multiple occasions boycotts and protests."

"In light of this, we are hiring additional security for the opening weekend just to err on caution," Leonard Binning, president of The Movie Mill Inc., said in an email last week to The Canadian Press.

"My young staff does not need to deal with any political fallout from showing movies -- regardless of popular opinion."