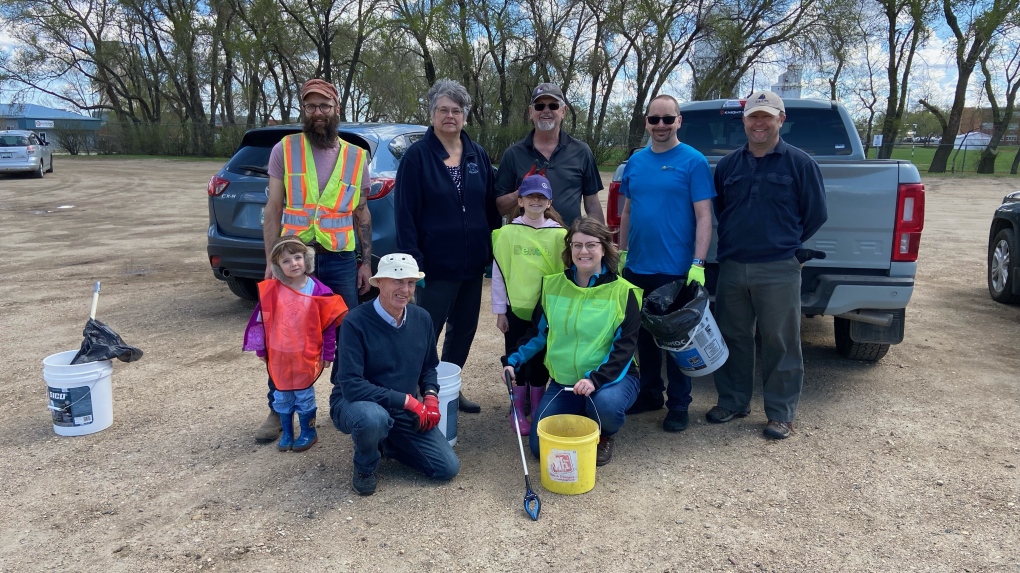 Community members in Moose Jaw took part in the city's annual spring clean up on Sunday.

It was the first time the event was held since the start of the pandemic.

Chairman of the clean up committee Kim Robinson said over 90 people participated in this year’s event.

“I think it's a real community pride building event,” said Robinson. “It's nice just to go out in your neighborhood and see everybody getting involved in picking up some trash and beautifying our city.”

Mayor of Moose Jaw, Clive Tolley, brought along some youth to help out in the clean up effort.

“I think (if) people would stop littering there wouldn't be a need, but there is a need so the good citizens have to pick up the stuff, put it in the garbage,” Tolley explained.

“SARCAN is a great place to take some of the bottles, cans, and help the environment, so I'm just encouraging people to stop littering and then we won't have to do (so) much spring cleanup.”

Seeing the effects of litter has shown the local youth how important clean ups are.

“It was nice getting to help (clean) the environment and it's sad to see how much people litter and stuff,” said one of the boys helping the mayor. “A bunch of beer bottles were broken, and it was just sad seeing how bad the environment can be affected by just littering.”

Diana Trodd and her family participate in the event every year and it has become a family tradition.

“As a family we enjoy seeing our city cleaner than it was and knowing when you drive by that little space is a little nicer than it was the day before,” she said.

One of the more common items found were masks.

“We did notice there were masks and a lot of other things,” said Trodd. “You get to see a theme as you start to pick things up like this year you notice fewer plastic straws and there's more paper straws.”

The annual event was a kick-starter for future events the city will be hosting. This includes the sidewalk festival that is set to run at the beginning of July.

Canadian Forces veteran James Topp was joined by Conservative Party leadership candidate Pierre Poilievre on his march through Ottawa today, as part of the final leg of his cross-country march to protest COVID-19 vaccine requirements.

Omicron cousin BA.5 predicted to cause nearly 70 per cent of COVID-19 cases by Canada Day

Researchers examining the threat of emerging COVID-19 strains predict Omicron BA.5 will account for nearly 70 per cent of cases in much of the country by Canada Day.

The Supreme Court of Canada says the expanded rules to further prevent a sexual assault complainant's past from being used against them in a trial are 'constitutional in their entirety.'

Stocks are down, but here's why experts say you shouldn't panic

As stocks continue to slump, it can be easy to let your emotions take over if you've got money invested in the market. But experts agree that there's no need to panic if you're invested in the right type of portfolio with the right level of risk.

The traditional Canada Day fly-past over Ottawa by the Canadian Forces Snowbirds has been cancelled, following a problem with the aircraft's emergency ejection parachute that grounded the fleet.

A group of Quebecers is going to court to argue that Mary Simon's appointment as governor general should be invalidated because she isn't fluent in French.

My landlord is increasing my rent – what should I do?

With increasing rent prices likely to be the reality for many Canadian tenants, some may be wondering how to navigate rising costs, or whether any course of action can be taken, if any. Legal experts across the country share their advice on how to handle a rent hike.

Exasperating delays at airports are increasing claims of lost or missing baggage, which one aviation expert blames on staff shortages.

Canada will be sending more troops to Latvia as part of a pledge to upgrade and strengthen the NATO battlegroup it is leading there, Prime Minister Justin Trudeau said on Thursday.