It’s been an expensive few weeks for some locally owned businesses in Regina as they deal with an increase in break-ins and thefts.

Glenn Valgardson, the owner of Pile O’ Bones Brewing, said his business has been broken into four times in five weeks.

Each time, he said the group has smashed the same window during the middle of the night.

“It’s a classic smash and grab. They get in, they get out. Whatever is in the way just hits the floor,” Valgardson said.

He said they mostly steal bottles of liquor and end up smashing glassware in the process.

The cost of the break-ins is adding up.

“The monetary value of the alcohol isn’t really anything, we’re under $500. But it’s all the infrastructure that gets broken around it. Just in glass alone we’re around $10,000,” he said.

The first two times he didn’t think much of it, but Valgardson said after the fourth occurrence he realized the business was being targeted.

“It’s just frustrating. We’re not the only ones around. There’s been a lot of local businesses that have been hit,” he said.

One of the other local businesses that has had a similar experience is O’Hanlon’s.

Andrew Shanks, the general manager, said the pub has been broken into three times since mid-July.

“Everybody is getting hit. We’re not too sure why or what’s going on but it’s been annoying to deal with,” Shanks said.

“I’ll have worked here 12 years in October and I have not experienced a break-in up until this past July.”

Like at Pile O’Bones, Shanks said each time the thieves take a few bottles of liquor from behind the bar.

“They found a weak point in one of our windows, smashed it and come in. [They take] four or five bottles maybe. I’m not sure what the value of that is - maybe a couple of hundred bucks of liquor,” he said. 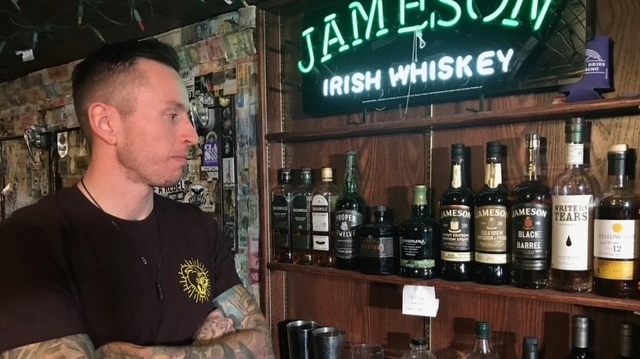 Andrew Shanks, the general manager of O’Hanlon’s, shows the shelf of liquor that has been restocked three times since July due to theft. (StefanieDavis/CTVNews)

After a tough few years for local businesses, Shanks said it’s frustrating to now be dealing with this.

“Dealing with this once, whatever, it happens. But for this to be an ongoing thing and for it to be affecting so many places is really annoying,” he said.

“It’s not something anybody needs in general, but especially not right now.”

Both Pile O’Bones and O’Hanlon’s have video surveillance of the incidents and believe it’s the same group of people targeting both businesses each time.

To put a stop to the thefts, both businesses have installed thicker glass in their windows which has proven to be effective so far.

“The glass we have in there is a lot more durable in case this happens again,” Shanks said.

“They have been back since we’ve gotten this new glass and thankfully they weren’t able to get through.”

“Thankfully no one was hurt and not much stolen, just a big old expensive mess to clean up,” Bar Willow Eatery posted on Facebook earlier this week.

The Regina Police Service is investigating and said 10 similar business break and enters were reported between June 23 and Sept. 12.

“[They] have some similarities to each other in that most of them are in the downtown area or in the immediate vacuity adjacent to downtown. There are also some similarities in the way that these businesses were entered, most of them by windows being broken by suspect(s). The other similarity is that most of these have occurred in the early morning hours,” Elizabeth Popowich, a spokesperson for the Regina Police Services, said.

Despite the similarities, Popowich said investigators have to remain open to the possibility that they’re all separate incidents.

“They’re also approaching each of them as a separate investigation,” she said.

“If we’re going to show a link between cases it has to be through evidence and investigation, not just speculation.”

By identifying suspects in one case, Popowich said police hope to conclude more than one investigation.

Anyone with information on any incident can contact police.

Notable moments, political statements made in Week 1 of the World Cup

As much as the action on the pitch has captivated fans across the globe, the 2022 World Cup in Qatar has also made important headlines for incidents off the pitch.

Protests in Iran continue despite internet blackouts; Canadians respond with rallies of support

Nearly two months after the protests were first ignited, the people of Iran continue to march in the streets, despite increasing violence, internet blackouts and arrests, while Canadians support them overseas, organizing rallies in response.

Protester with rainbow flag runs onto field at World Cup

A protester ran onto the field Monday carrying a rainbow flag and wearing a blue Superman T-shirt that said 'SAVE UKRAINE' on the front and 'RESPECT FOR IRANIAN WOMAN' on the back during a World Cup match between Portugal and Uruguay.