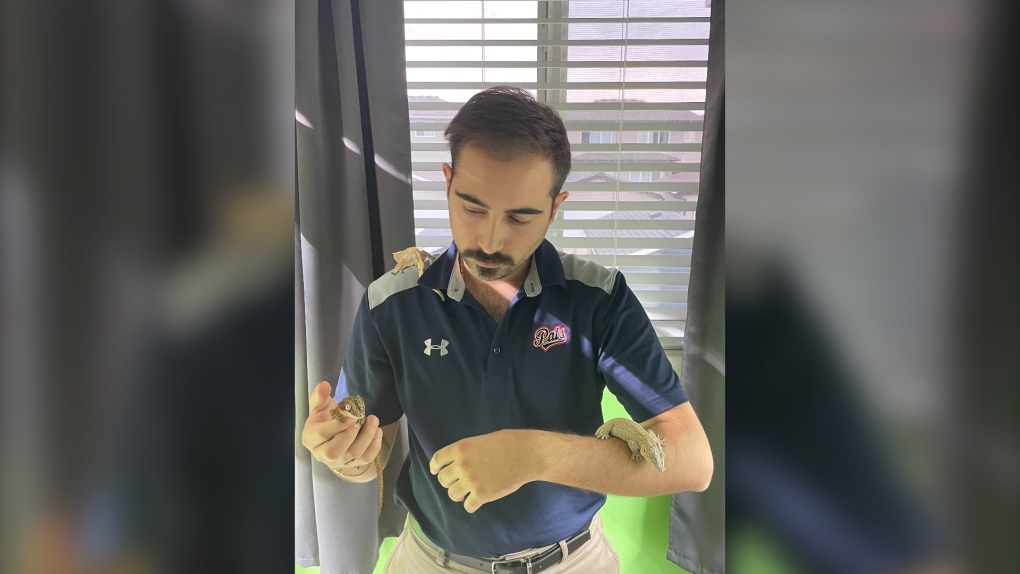 Regina Pats radio broadcaster Dante De Caria has a passion for more than just sports – he is also an avid collector of reptiles and keeps more than a handful in his home as pets.

De Caria, originally from Ottawa, is in his second season as the Regina Pats’ radio broadcaster and manager of broadcast and hockey communications and is now settled into his new home.

He currently owns eight reptiles including three he has acquired since moving to Regina.

“The geckos are kind of from the same family tree, an island called New Caledonia, a French colony very close to Australia, the pink tongue skinks come from the east coast of Australia and the black and white Argentine tegu hails from Argentina or South America,” De Caria said.

Before moving to Regina, De Caria also had numerous species of fish as well as salamanders.

However, he decided to switch to collecting solely reptiles before leaving Ottawa due to the difficulty of transporting other animals across the country.

“We made the trip in about three days,” De Caria said of his move to Regina.

“Essentially what made it difficult transporting the animals is the fact that you cannot put them in the moving truck because with the sun beating down even in winter it will get too hot for them and there’s just not enough air circulation.”

“So I had to put them in containers in my car and put them in the front seat with me and essentially the whole 36 hour trip I just tried to keep the temperature in my vehicle as comfortable as possible,” De Caria said.

He also had to pay attention to the live plants he keeps in the animals’ enclosures. 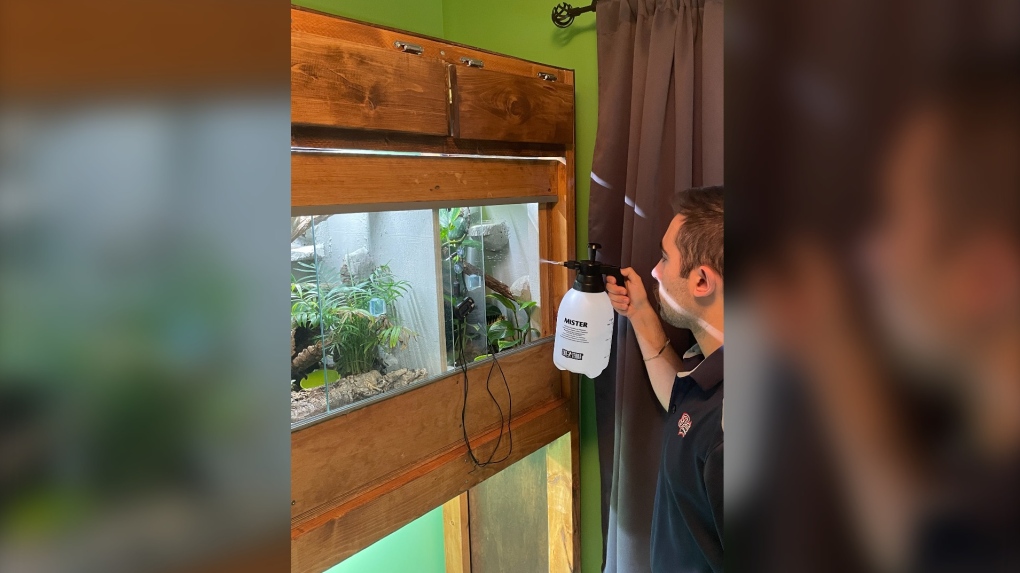 De Caria also keeps live plants inside his animal enclosures, a practice some reptile keepers do and others do not.

De Caria’s passion for sports – especially hockey and baseball – started in his childhood, but the 25-year-old has also had a lifelong passion for animals.

“I’ve always been passionate about all types of animals, from dogs and cats to rabbits, you know mammals as well as fish and all the way down to reptiles,” he said.

“If you look at pictures of my old room when I was younger you can see all the animal books in there that I was always reading.”

De Caria recalled when he was living in British Columbia, after work he would often go to locations where the sea lions would be just to watch them.

“I found that so relaxing and I really enjoy the nature side of things,” he said.

The Pats will be covering a lot of miles in November and the start of December with only three games on home ice this month, meaning De Caria will be away from his animals for an extended period of time.

One of the reasons he became interested in reptiles and keeping them as pets is certain species independence and ability to be left alone for extended periods of time.

“The more and more research I did when I became interested in reptiles, the more I figured they would work with my lifestyle and career,” he said.

“For example some of my reptiles are nocturnal, which kind of helps me because after a night game I am still able to go home and feed them and interact with them because they’re active at night,” he said.

De Caria said most guests to his home are aware of his collection of animals and take a quick interest in them. He said he also takes pride in giving them the best habitats possible and dedicates hours of his spare time to building new enclosures for the animals as they grow.

He is currently developing his basement, where he plans to eventually keep all his animals in the enclosures he has built himself. 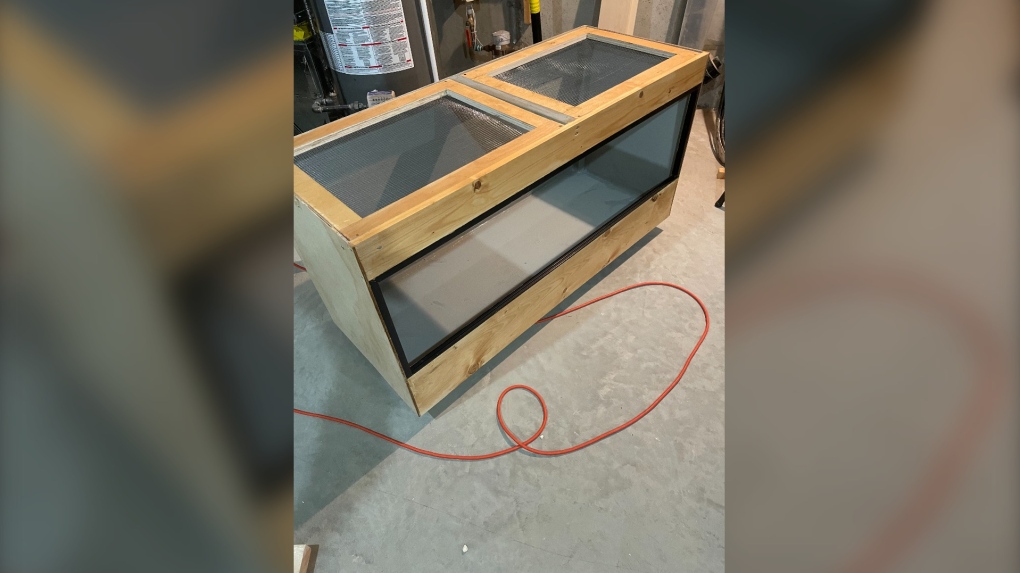 De Caria’s animals, as well as his desire to build enclosures for them himself, has given him the chance to meet and converse with many people in a city the 25-year-old had no previous connections in.

“They’re very experienced and you know I’ve even had the opportunity to build a good relationship with the people there, they know me by name and I know their names, I am in there once or twice every week,” De Caria said.

Stuart Cook, a co-owner of the store, said he’s familiar with De Caria and said they had a long discussion in particular about his tegu, which is a much more difficult animal to care for than some of his other species. 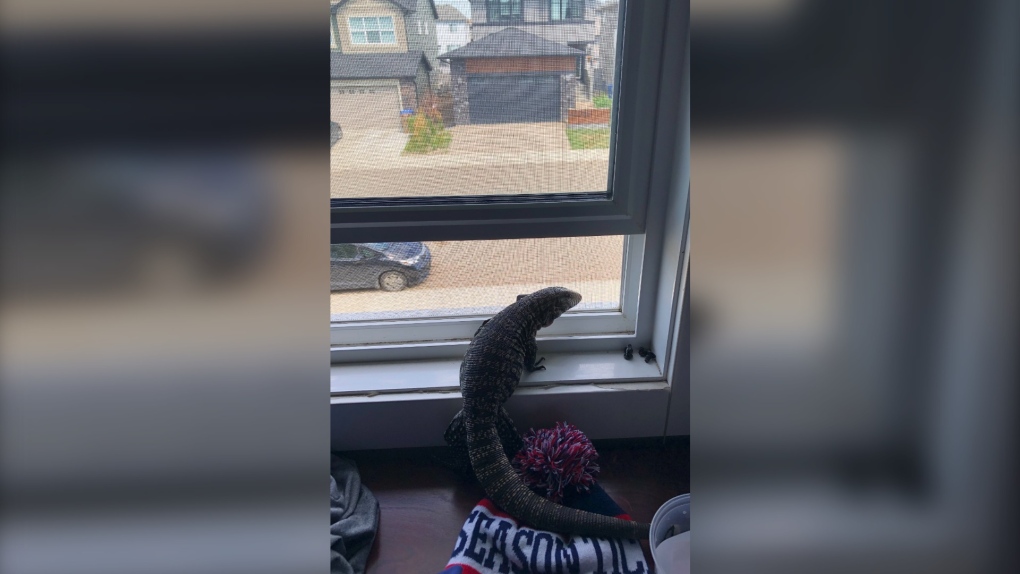 The most challenging animal to care for is De Caria's Argentine black and white tegu, which can grow to four feet in length.

Cook said for people who are interested in becoming reptile owners it’s important to do verified research and understand that some animals such as corn snakes can be left alone with water for a weekend and others like the tegu need much more care and attention.

“Our business is mostly answering questions first and making sure people do not get into something they’re not prepared for,” Cook said.

“We want to first and foremost make sure that someone doesn’t go home with something that they don’t really want.”

Regina Prairie Aquatics and Exotics has been in business since 2012.

When De Caria and the Pats embark on their longest road trip of the season later this month that will take them all the way to the west coast and Vancouver Island, De Caria can take comfort in knowing the business he has come to trust will board and take good care of his animals until his return.

The federal government is pledging to increase health funding to Canada's provinces and territories by $196.1 billion over the next 10 years, in a long-awaited deal aimed at addressing Canada's crumbling health-care systems with $46.2 billion in new funding.

Three men who disappeared after planning to rap at a Detroit party were killed by multiple gunshots, police said Tuesday, five days after their bodies were found in a vacant, rat-infested building.

Zoom is cutting about 1,300 jobs, or approximately 15% of its workforce. CEO Eric Yuan said in a blog post Tuesday that the company ramped up staffing during the COVID-19 pandemic, when businesses became increasingly reliant on its service as people worked from home. Yuan said Zoom grew three times in size within 24 months to manage demand.