MACNUTT -- The MacNutt Community Centre is getting a new roof after decades of hockey, curling and gatherings.

Fundraising efforts for the new roof began about a year and a half ago in the town 75 kilometres east of Yorkton after it was determined the current one didn’t have many years left.

“If we don't have the centre we don't really have a community, it's kind of the hub and the heart of MacNutt," said Braden Adam, a member of the fundraising committee.

The centre is the product of a community fundraising and build effort and has been standing since 1967.

"Everyone comes here whether you care about what's going on on the ice or not, just to have a coffee and talk to the neighbours. It's where we all meet," said Kelly Fatteicher, president of the MacNutt Recreation Board.

The grandparents and great-grandparents of Jon Adams, president of the MacNutt Kings hockey team, were among those involved. 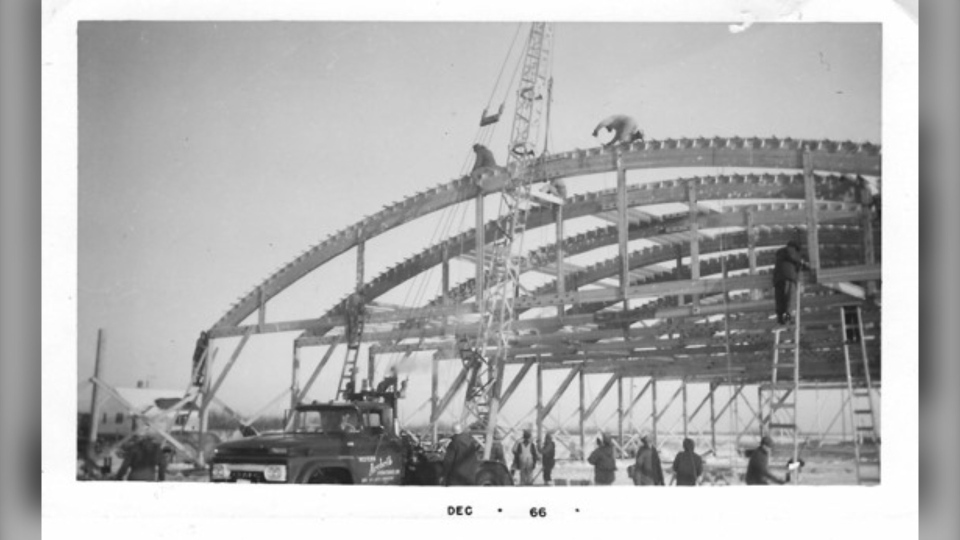 Archive photo of the initial construction of the MacNutt Community Centre. (Supplied: Frank and Judy Becker)

"They wanted to see the rink being built and now it's our generation's turn to help out and keep the rink going for hopefully that many more generations to come," said Adams.

Funds for the project rolled in quickly in all aspects, from small fundraisers to corporate donations.

"From Vancouver to Texas, [people] who just had roots or family in MacNutt and moved away and heard about the project and local, far away, the support has just been amazing," said Fatteicher.

The rec board hosted an 80s dance for the project last February, which ended up being the community’s last hoorah before the pandemic hit.

"The rink is centred around lots of stuff like that and if we can get a roof on it it allows us to have more and more community events like that where we can kind of get together," said Adams.

Currently the sun shines in through the roof of the centre, but once construction wraps it will be ready for when the community can gather once again.

"We look forward to making some memories in this place in the years to come," added Fatteicher.

Construction began on the roof a few weeks ago, but the fundraising committee wants people to know their work isn’t done yet. The group is still working to raise funds for the project as construction continues to unfold.