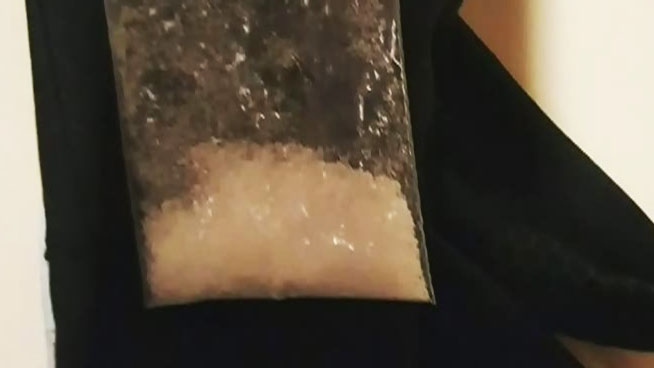 Crystal meth can be seen in this undated photo.

It was 2015 when Cybil Cappo spent her first night of what would turn into months of getting high on crystal meth.

She had grown up in foster homes and suffered abuse. Her mother had died and she was angry. She crashed with different friends in Regina and robbed people to pay for the drug.

It was hell, she says.

"My one friend, we lived in his basement and it was November ... Next thing you know it was February and I was still in that basement, like just doing meth."

Now off meth and living in Edmonton, the 29-year-old mother said nobody seems to have the answers needed to begin to solve Saskatchewan's growing meth problem.

Regina's chief of police, Evan Bray, says meth addiction is driving up all categories of crime in the city.

In about 2015 -- the same year Cappo started getting high on meth -- the drug emerged as a widespread problem in the city, Bray says.

Crystal meth is relatively cheap and availability of ingredients means it's everywhere.

Without interventions, Bray adds, someone using meth who enters the justice system is likely to wind up in the hands of police again.

In 2015, there were 142 meth-related incidents recorded in Saskatchewan. The figure jumped last year to more than 530 offences.

The province struggles with high rates of HIV and hepatitis C through intravenous drug use and wants to prevent needle sharing, he says.

In two months, staff have handed out more than 1,000 pipes.

They need long-term help that isn't available for them, she says. Frustrated nurses also have to regularly deal with potentially violent situations.

"Someone who's high on crystal meth is disruptive. They are unpredictable. They are dangerous. They are extremely sick."

Kathy Willerth, director of mental health and addiction with the Ministry of Health, says the number of people entering treatment centres has remained the same, but more of them are struggling with meth addiction. And that means they're staying in treatment or detox longer.

Willerth says it takes longer for people to detox from meth and there's a significant risk of relapse.

The province's health ministry says three per cent of people seeking treatment services in 2012-2013 reported a crystal meth addiction. That rose to nearly 23 per cent in 2016-17.

The province has said it will spend $30 million more on mental health and addictions this year and plans to open more treatment beds.

Cappo got off meth when she was in jail. She has been clean for about three years.

She's now studying to work with people with addictions, but plans to stay away from Regina because the people from her past are still using.

"I made a lot of enemies and I've hurt a lot of people," she says.

"But change is possible. And I'm proof of it."