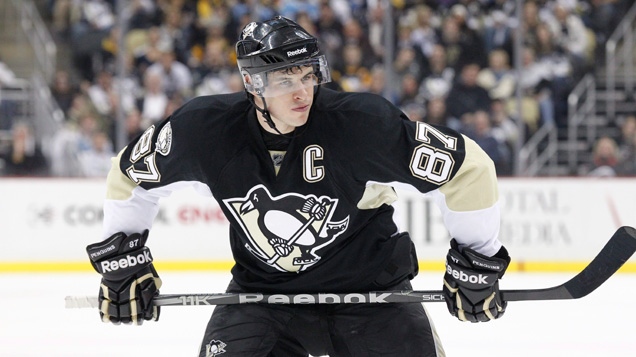 This Jan. 5, 2011, file photo shows Pittsburgh Penguins' Sidney Crosby playing against the Tampa Bay Lightning in the first period of an NHL hockey game, in Pittsburgh. Crosby's agent said there's no timetable for the Penguins star to return from a concussion, the clearest indication yet that he may not be ready when the NHL season begins in October. (AP Photo/Gene J. Puskar, File)

Who is the No. 1 player in the NHL today? That's the question that was once again posed to a special panel of hockey experts whose votes created the second annual TSN ranking of the Top 50 current NHL players.

Check out the full list on TSN.ca and join the conversation on Facebook and on Twitter with #NHLonTSN. You can also chime in with your analysis with the 'Your Call' feature on TSN.ca and the TSN iPad app.

And watch NHL On TSN: Top 50 NHL Players tonight at 8pm et/5pm on TSN as the panel breaks down the list.

Despite missing the second half of the 2010-11 season with a concussion and no return date just yet, Pittsburgh Penguins captain Sidney Crosby was voted the top player ahead of Washington Capitals superstar Alexander Ovechkin for the second straight year.

Crosby was well ahead of the field in scoring when he suffered the injury in early January, posting 32 goals and 34 assists in 41 games. And he still finished the year as the Penguins' leading scorer.

Crosby has also reached topped the 100-point mark in four of his six NHL seasons. His points-per-game in the postseason ranks him third in NHL history with 1.34, trailing only Wayne Gretzky (1.84) and Mario Lemieux (1.61). The NHL's premier player amassed 215 goals and 357 assists for 572 points in 412 games while winning the Stanley Cup, Hart Trophy, Art Ross Trophy, Rocket Richard Trophy and Lester B. Pearson Award.

The order was determined by a cumulative point system based on the individual rankings. In the end, six goaltenders, 10 defencemen, seven left wingers, 20 centres, and seven right wingers made the grade.

Jonathan Toews (who eclipsed the 70-point plateau for the first time in his career) and Martin St. Louis (who finished last season one point shy of the 100-point mark) were eighth and ninth respectively.

Rounding out the Top 10 is Boston Bruins defenceman Zdeno Chara, who not only led his team in the regular season, but was a key factor in his club winning the Stanley Cup.

Of the eight teams without any players in the Top 50, four are them are based in Canada - with the Winnipeg Jets, Toronto Maple Leafs, Ottawa Senators and Edmonton Oilers all left out.

Where player age is concerned, Carolina Hurricanes forward Jeff Skinner, 19, is the youngest player to be voted onto the list. At the other end of the spectrum, Red Wings defenceman Nicklas Lidstrom is the oldest at 41 while Thomas is the second-oldest at 37.

Where countries of origin are concerned, Canada led the way with 26 players, followed by the United States with nine and Sweden with seven. Rounding out the list are four players from Russia, two from Slovakia and one player each from Finland and Slovenia.