Despite rocky road, Milky Way forges ahead in midst of COVID-19 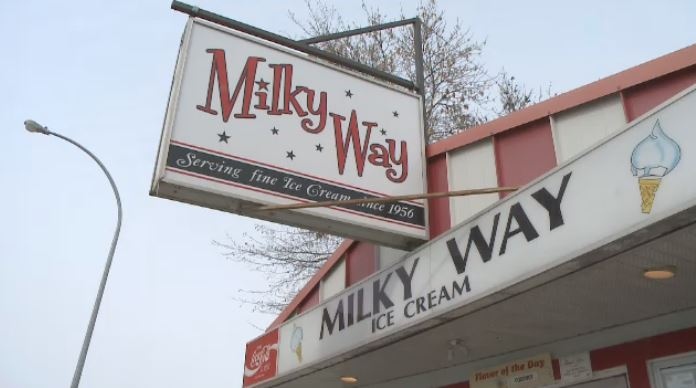 REGINA -- Milky Way has been a seasonal staple in the Regina ice cream scene since it opened in 1956.

It has weathered all kinds of literal and metaphorical storms, but owners say they've never seen a year like 2020.

The shop usually opens in early March and closes in mid October.  When they opened this year on March 13, they had no idea what would lie ahead.

"We were pretty full bore in March; we do a lot of ordering," explained owner and manager Ryan Boldt.  "Then everybody was kind of like, 'What's going on?' And then it seemed to be almost a week of like, 'Holy!' Boldt said.

Milky Way closed in March and re-opened in May.

"We actually were allowed to stay open, because we're a takeout establishment, but we thought, no, you know there's too many unknowns right now. We don't want people to get sick or be responsible for any of that. We didn't want to do that for sure, with staff and patrons.  So we decided it was best to just shut down," Boldt said.

Safety precautions have been in place for the 2020 season, including marked physical distancing placements for customers and an extra staff member to ensure guidelines are followed.

"When you're closed from March, through April and half of May, that's actually our busiest time in the short season."

It has been a difficult year but the owners of Milky Way are keeping with their end of season traditions.

"We do a half price ice cream sale.  So any ice cream products are half price, except for cakes and mini cakes, stuff like that," Boldt said.   "It's just the thank you for everybody coming out. We just want everyone to fill up their freezers and have a little bit of ice cream on us for the winter."

Despite the financial hardships of 2020, Boldt is determined to re-open again in 2021.

"If we have to do the same thing next year, and everybody hopes that we don't, we have the knowledge of how to run the place," he said.

"When everybody just does their part, you know people are staying distant, and it's a great idea to wear a mask when you're coming.  If we need to continue to do that, we'll just do that, and we will open, unless the health board or the government says otherwise."