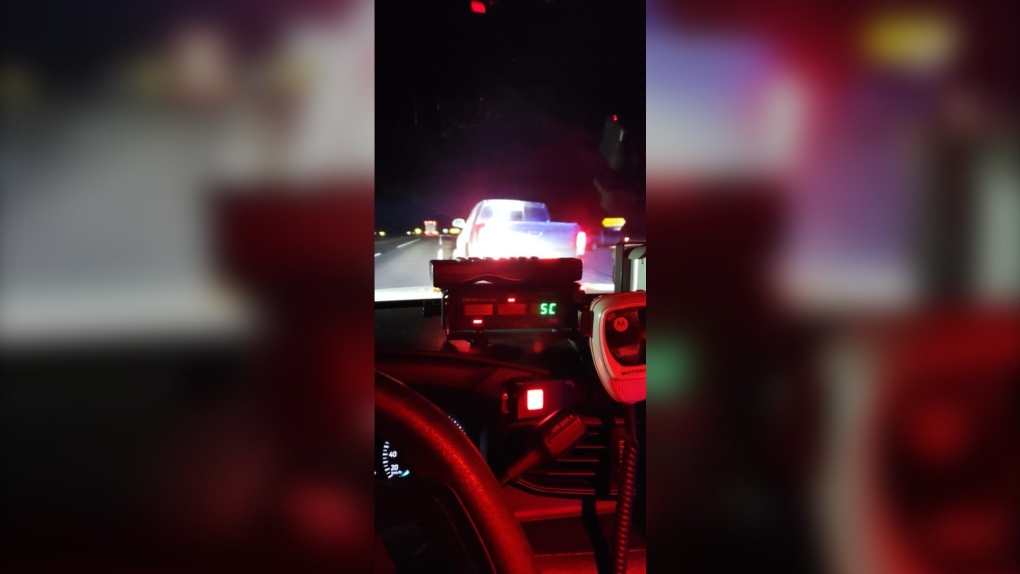 A driver was caught travelling 144 km/h in a 110 km/h zone near Regina on Nov. 25. (Combined Traffic Services Saskatchewan/Twitter)

A driver is facing multiple charges after being caught speeding near Regina.

According to a social media post from Combined Traffic Services Saskatchewan (CTSS), a driver was caught travelling 144 km/h in a 110 km/h zone early Friday morning.

Police stopped the vehicle and reported that the driver lied about his name to officers.

The driver was arrested and criminally charged for lying about his identity, police said.

In addition, the driver was charged for speeding and driving while suspended.

The vehicle involved in the incident was also impounded, the post outlined.

A CTSS member stopped this veh for 144 in 110. Driver lied about his name. Arrested & criminally charged for lying about his identity. Got charged for speeding, driving while susp & the vehicle was impounded. Always better to just tell the truth. @reginapolice pic.twitter.com/jZjxJ62H5y

The independent body that oversees the safety of technical systems and equipment in British Columbia has found a deadly ammonia leak near Kamloops last May was a tragedy that took years to unfold.

Ottawa police and Bylaw Services are telling residents and visitors they will be taking a zero-tolerance approach to parking, noise and fireworks violations downtown this weekend, on the one-year anniversary of the 'Freedom Convoy' demonstration.

Asteroid coming exceedingly close to Earth, but will miss

An asteroid the size of a delivery truck will whip past Earth on Thursday night, one of the closest such encounters ever recorded.