REGINA -- A Christmas village display made up of thousands of individual pieces is a Regina grandfather’s way of connecting with his grandson, while also helping himself live out a childhood passion.

“I thought it would be nice to have a train around the tree. I always wanted to have one as a kid, but never really got one,” Don Savario, the display creator, said.

Three years ago, when he learned he was becoming a grandfather, he finally put a train around the Christmas tree because of his grandson, Theo. Every year after that, the display grew exponentially. Now, it’s an entire village complete with a parade, several trains, fair grounds, a gondola and multiple ice rinks. 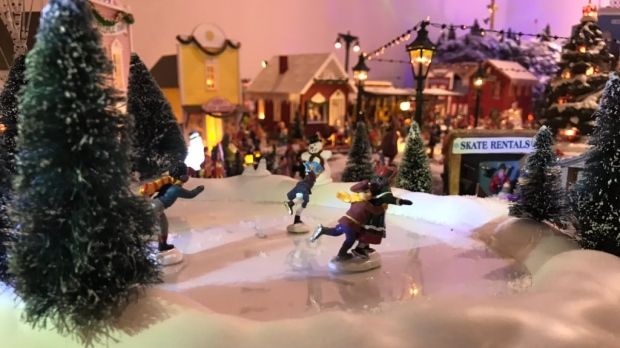 “The fun thing is finding the pieces, because there’s not just one place you go to get them,” Savario said.

He spends the year shopping online from places like Germany, the U.S. and Australia.

His wife, Theresa, said each year she’s shocked at the growth.

“When I look at all the details that he’s put into it, and figuring it all out – because this is different than it was last year – I’m amazed,” she said.

It takes months to set up the full display to be ready for Christmas, but Savaria said the effort and the cost is worth it.

“Ostensibly it’s for my grandson and my friends’ families, the kids. But really, deep down, it’s for me and my fantasy world,” he said.

As Theo gets older, he’s showing more and more interest in the village, and Savaria hopes that continues.

“It’s fun to have something like this with him, and over the years I’m looking forward to it growing, and he can help build it one day,” he said.