End of the line for Dog River; Corner Gas set torn down in Sask.

The tank has run dry on an iconic piece of Saskatchewan’s landscape. After more than 10 years, the Corner Gas set near Rouleau, Sask. was torn down on Friday.

The set was built in 2003 to shoot 13 episodes of the CTV show Corner Gas. The first episode aired in January of 2004, and when Corner Gas became an overnight sensation, the set stood for six seasons and a movie.

“We had probably close to 800 people this summer from Ontario, from Vancouver, Victoria, the States,” said Linda Kerfont, who works at the Dog River Hotel and Bar in Rouleau.

Time took its toll on the fictional town. The site was built on a bog and the buildings were slowly sinking.

And though its time had come, Thompson had tears in her eyes watching the building come down.

“The moment that the truck actually started to push the gas station down, I have to say that wasan emotional moment,” she said. “We have had so much fun in that building and that building has created a huge amount of joy for the whole country.”

The foundation of the building was beyond repair and the area was no longer safe for the public.

“The structure was not built for longevity,” said Rouleau Mayor Grant Clarke. “It never was.”

Dog River was a fictional town, but Clarke said the show managed to capture life in a small town on the prairies and helped to put Rouleau on the map.

“There was something about it that caught your attention,” he said.

For Dog River fans still looking to get their fix, the town said it is planning a self-guided walking tour for summer 2017. Producers of the show are also working with the Western Development Museum in Moose Jaw to find a home for some iconic pieces of the set.

The set of Corner Gas in Rouleau is being torn down #Sask @ctvregina pic.twitter.com/IwDppB5MUg

It's starting! The structure is coming down @ctvregina #Sask pic.twitter.com/dkr3qfxWhN 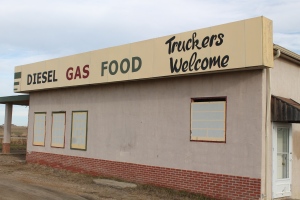 IN PICTURES The set of Corner Gas is coming down after 13 years in Rouleau, Sask.