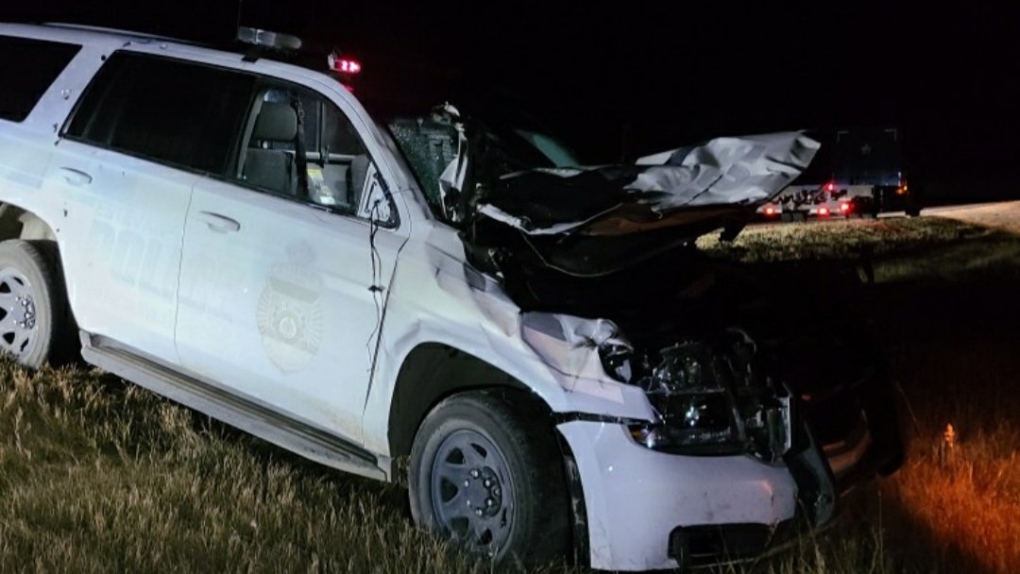 An Estevan police vehicle is shown after it was involved in a crash with a moose Thursday. The officer involved was unhurt. (Source: Chief Paul Ladouceur/Estevan Police Service)

ESTEVAN -- The Estevan Police Service is using a recent collision involving one of its members as a reminder of the damage colliding with wildlife can cause.

According to a release from EPS, the crash happened Thursday night between a moose and an EPS patrol vehicle on Highway 47 near the intersection with Highway 361.

The officer, part of Combined Traffic Safety Services Saskatchewan, was uninjured, but the vehicle was severely damaged.

The crash is being investigated by RCMP.

According to SGI, an average of 387 people are injured and four people are killed in animal related collisions on Saskatchewan roads annually.

Drivers are encouraged to be cautious over the Thanksgiving weekend, as wildlife are particularly active during the late fall and early winter period.

One of our CTSS members was involved in a collision with a moose last night. Vehicle severely damaged. Most importantly, our member was not injured.
A reminder of how serious a collision with wildlife can be. #drivesafe #ctss #sgi @SGItweets pic.twitter.com/bSUfn92Z0B