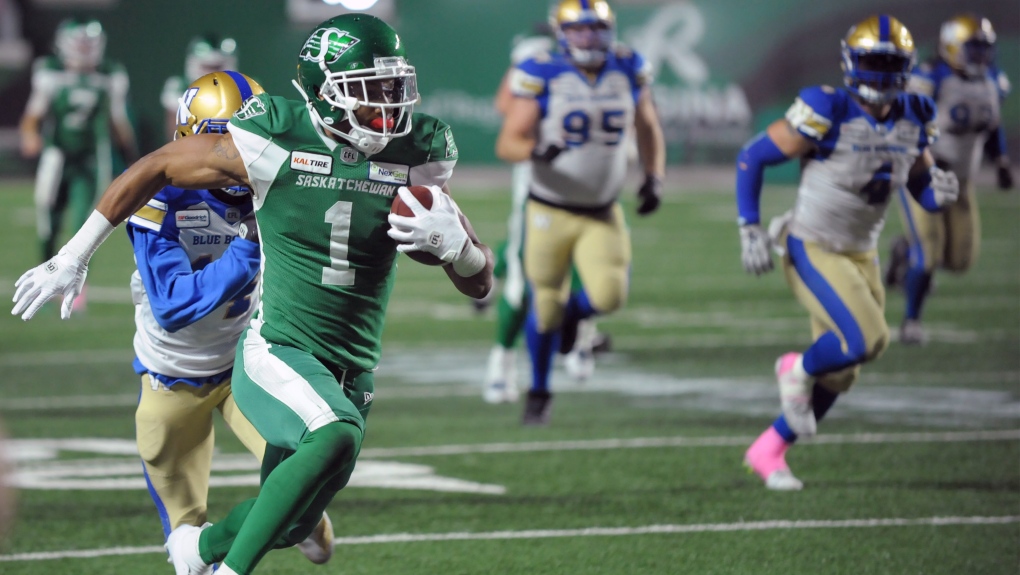 Saskatchewan Roughriders wide receiver Shaq Evans runs in a touchdown pass during second half CFL action against the Winnipeg Blue Bombers, in Regina on Saturday, Oct. 5, 2019. THE CANADIAN PRESS/Mark Taylor

REGINA -- The Saskatchewan Roughriders appreciate the view from the top. Their climb, however, is far from over.

A 21-6 victory Saturday over the visiting Winnipeg Blue Bombers, coupled with Calgary's loss earlier in the day in Montreal, pushed the Riders into first place in the tight West Division.

"It feels good, but it doesn't mean anything right now," said Riders receiver Shaq Evans, whose 61-yard touchdown reception late in the fourth quarter sealed the win. "We still have four games left, we'll continue to build on this."

Evans rose to the occasion with seven receptions for 193 yards in a game where both offensive units struggled to find much momentum.

Cody Fajardo finished the night completing 18-of-28 pass attempts for 299 yards. He also rushed for 47 yards.

The Riders will take their 10-4 record on the road for the next three games, beginning Friday against the second-place Stampeders (9-5).

The loss was Winnipeg's third consecutive and dropped the team to 9-5. They'll host the Montreal Alouettes on Saturday.

The Riders have won two of the three head-to-head contests versus Winnipeg this season and therefore own the tiebreaker should the teams finish the regular season tied in the standings.

Following their game next week at Calgary, the Riders will then travel to B.C., before a home-and-home series against Edmonton.

"If there's a time that's prepping you for a playoff mentality then this is it," said linebacker Solomon Elimimian, who led the Riders with eight tackles. "We get a tough team in Calgary next week and it's not going to be easy. But this is what you play for -- these big games and big opportunities to see what you're made of."

Saskatchewan's defence on Saturday made life miserable for Winnipeg quarterback Chris Streveler. Streveler was intercepted twice -- once in the end zone and the other at the one-yard line -- and sacked four times.

Streveler finished the night completing 26-of-40 pass attempts for 254 yards.

When the Winnipeg offence did march the ball into scoring range, it didn't end well.

Streveler moved the ball inside the Saskatchewan 30-yard line on three occasions, yet the team came away with just three points. The latter two possessions resulted in turnovers. Streveler was sacked and stripped of the ball by A.C. Leonard, with the Riders recovering the fumble. On their next possession, Streveler was intercepted by Ed Gainey in the end zone.

Both of those turnovers came in the third quarter with the Riders leading 11-3.

"They're a great defence, but I feel like we had opportunities," Harris said. "We moved the ball well at times and not well other times. It's just that consistency that we need to have overall. Better execution."

Added head coach Mike O'Shea, "When you lose the turnover margin like that, the stats historically would show that you're probably going to lose the game. But I thought we battled hard and our defence did a great job. The only thing they didn't do was take the ball away."

The kickers produced all of the first-half scoring, as both offences struggled to find any traction.

Brett Lauther kicked four field goals for the Riders and punter Jon Ryan had a two of his punts bounce into the end zone for singles.

Winnipeg got on the scoreboard with one second remaining in the half when Justin Medlock kicked a 27-yard field goal.

The Riders led 8-3 at halftime.

Medlock's second field goal of the night -- from 37 yards -- early in the fourth quarter brought Winnipeg to within five at 11-6.

"We played physical and tackling is a big part of that," Elimimian said. "Tackling is something we stressed all week at practice. We're facing Streveler, Andrew (Harris), (Nic) Demski, these are all talented guys when they have the football and so we had to get hats on them and get 12 guys to the ball. That's what we did well tonight."

This report by The Canadian Press was first published Oct. 5, 2019.