Fajardo, Lauther banged up in win vs Montreal

Fajardo, Lauther banged up in win vs Montreal 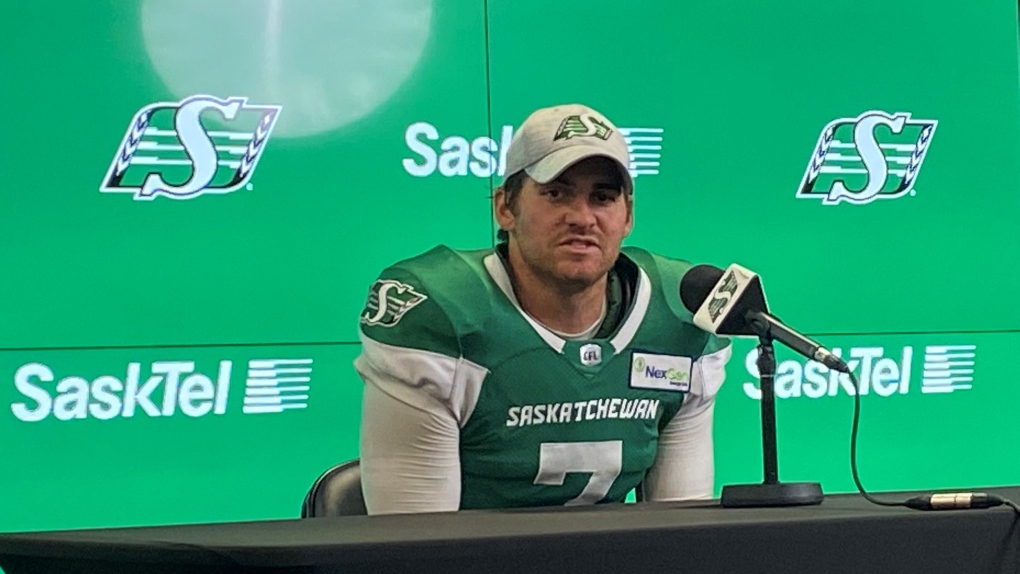 Cody Fajardo said it’s “never a question” he’ll definitely be out there Friday when asked about his heath. (Darrell Romuld / CTV News)

The Saskatchewan Roughriders’ starting quarterback is the first to admit he’s not playing at one hundred percent. The 30-year old pivot has sustained some big hits this season, leading to his wearing of a protective knee brace.

After Saturday’s win against the visiting Montreal Alouettes, it appears he’ll keep that brace a little while longer. The 30-year old did finish the game but had a noticeable limp in the fourth quarter after suffering a hit to the knee from a Montreal defender.

“If I didn’t have my knee brace on, I probably wouldn’t have finished the game.” Said Fajardo after the game, noting that his mobility entering the game was at about 80-percent. For a quarterback who has built a career on getting yards on broken plays, that’s a problem, but one he has experience with. Fajardo says he had a similar injury on the other leg during his junior year at college that limited his mobility in the pocket, so he knows what to expect.

“I didn’t run as much as I wanted to that year.” Said Fajardo. “It’s hard when my game is so ‘break the pocket, get out and be explosive’ but you have to find other ways to win games.”

Head Coach Craig Dickenson said of the bumps and bruises “We think he’s going to be alright, but he’s beat up pretty good.” Noting that several players in the locker room were wearing ice packs on their shoulders and knees.

“I have to do everything I can to get my body prepared and the fact that I finished the game was encouraging.” Said the quarterback.

Brett Lauther is also a little banged up after the win.

“I don’t think he’s going to miss this next game but he’s not 100%. He got bruised up and bloodied like a lot of guys in there.” Said Dickenson of his kicker. Lauther was forced to make a couple of special teams tackles in the contest.

The head coach says he’s going to give all of his players a couple of days off to rest their bodies before getting back to work in preparation for Ottawa at home on Friday night.

Transport Minister Omar Alghabra is testifying before the House of Commons transport committee this afternoon about ongoing airport delays and flight cancellations.

Retailers sitting on 'mountains' of excess inventory in need of liquidation: expert

Consumer behaviour, a looming recession and the reactions of retailers to pandemic-driven supply chain issues are combining to drive a liquidation renaissance, according to one business advisor and retail futurist who spoke with CTVNews.ca.

Prime Minister Justin Trudeau nominated Ontario judge Michelle O’Bonsawin to the Supreme Court of Canada on Friday. She is the first Indigenous person to be tapped to sit on Canada's top court and the appointment is being celebrated as filling an important role at the highest level of the country's justice system.

A 81-year-old Danish woman traveling from Africa to Canada was arrested at Warsaw airport on suspicion of illegal possession of heroin worth over US$515,000, officials in Poland said Friday.

A prominent Quebec cardinal is denying sexual assault allegations against him contained in a class-action lawsuit that was formally filed this week in Quebec Superior Court.

Two pilots are believed to have fallen asleep and missed their landing during a flight from Sudan to Ethiopia on Monday, according to a report by commercial aviation news site Aviation Herald.

Back to school: A look at the COVID-19 rules in place across provinces, territories

As students across Canada gear up to enter what will be their fourth academic year in the pandemic, CTVNews.ca takes a look at what measures will be in place in schools, by province and territory.

Nunavut's acting minister of community and government services says the territory has declared a state of emergency in Iqaluit to ensure the city can begin replenishing its water reservoir without delay.