Fajardo leans on his faith to win West semi-final 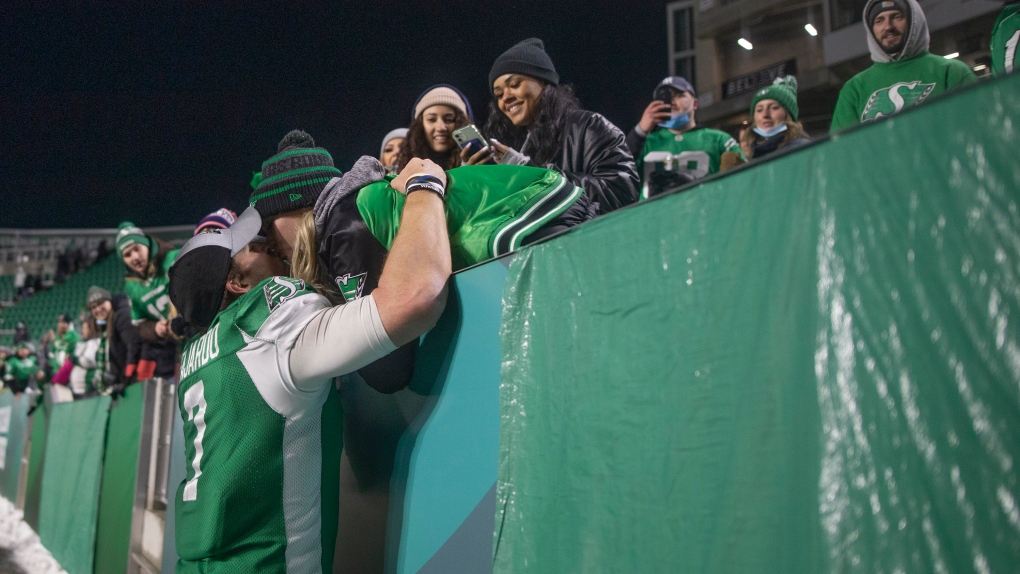 Roughriders quarterback Cody Fajardo didn’t have his best game on Sunday, despite the Riders’ 33-30 victory over the Calgary Stampeders.

The win earned the club a trip to Winnipeg to meet the regular-season champion Blue Bombers on Dec. 5.

“If you’d have told me going into this one that I’d throw four picks and we’d win the game, I’d have told you that you were psychotic,” Fajardo told reporters after the game.

The 29-year old -- known for crediting a “sprinkle of Jesus” for his success --leaned on his faith once more. Fajardo threw four interceptions in the contest, saying a “dollop of Jesus” helped get his first playoff win.

“I lean heavily on my faith. I’m a guy who prays a lot during games. I told God I needed him on one of those drives and he found a way to come through for me,” Fajardo said.

He said the win made the interceptions easier to stomach.

Fajardo credited the Stampeders defence in making plays. He said he delivered a pass attempt off time intended for Shaq Evans that was taken away by the field corner. A little later on, he tried to layer a pass to Evans between a pair of defenders and said he just didn’t put enough ‘zip’ on the ball.

The Riders’ defence made a critical stop with little time on the clock to preserve the 30-30 score. Ed Gainey made two grabs for interceptions with the Stamps threatening.

The head coach said despite the turnovers, his faith in his quarterback never waivered.

“The guy is a winner. That’s all you can say about him. He just finds a way to win,” Craig Dickenson said of his pivot. “When you need a drive late, he finds a way to move the chains.”

In the second half of Sunday’s West Semi Final, Fajardo changed his strategy slightly, opting to run the ball more.

Fajardo finished the game as the team’s leading rusher with 89 yards on the ground on 10 carries, the majority coming in the second half. Fajardo said he noticed that the Stampeders did not have a spy defender on him and it opened up lanes for him to take off. It’s an element of his game he enjoys using and can be a big weapon.

“For me as a runner it helps me get into the rhythm of the game, you feel the chains moving, it helps me get comfortable, and it was one thing that pulled me through some of the adversity from the first half,” he said.

The attention for the Roughriders now turns to the West Final against Winnipeg.

“They’re the best team. They’ve been the best team all year. We’re happy to be playing them and we’re going to give them a good game.” Dickenson said of their upcoming opponent.

The Riders will return to practice on Wednesday and begin the process of readying for the Winnipeg Blue Bombers.

Fajardo’s stat line from his first every playoff win won’t be anything to marvel at when you look back at the game. He completed 22 of 33 pass attempts for 189 yards, one touchdown and four interceptions.

The Riders and Bombers meet in the West Final at IG Field in Winnipeg on Sunday at 3 p.m.