REGINA -- The owners of Bar Willow Eatery are facing a new struggle as they attempt to overcome pandemic obstacles after the requirement for city permits shut down their newly created outdoor winter space.

During the summer, they spent thousands of dollars expanding their patio to serve more customers from a safe physical distance, since they were limited on how many they could serve inside.

“Inside, we have a really small footprint. With all the capacity constraints due to spacing of tables, it wasn’t feasible to run the business on just what we had inside,” Amanda Carter, co-owner of Bar Willow Eatery, said.

They added more furniture, heaters, fire pits and tents to make the outdoor spacing comfortable for dining in all conditions. Carter said customers were appreciative of their ongoing efforts to follow COVID-19 protocols put in place by the provincial government. 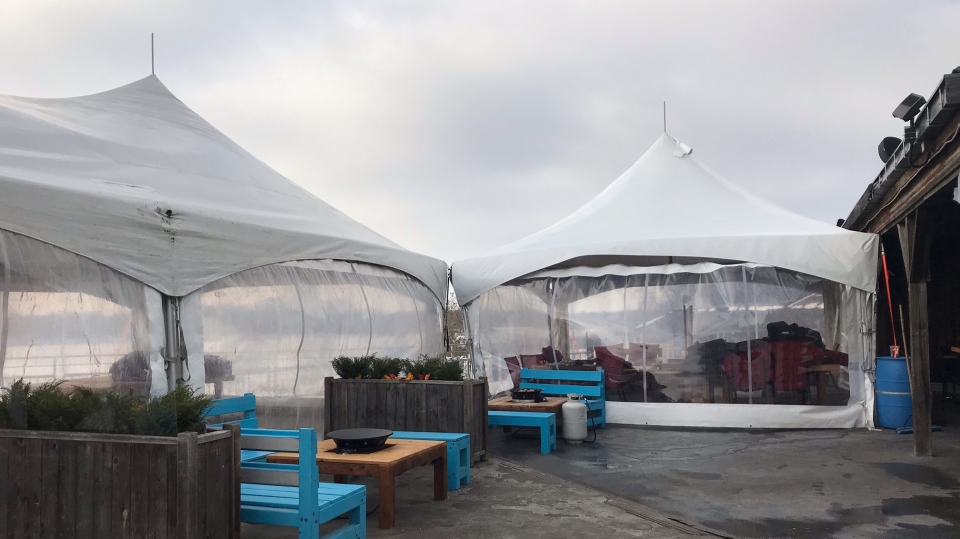 “Some of the people, it was the first time they’d ever been out because they just did not feel safe sitting inside a restaurant,” Carter said. “To be outside with all the fresh air circulating through the tent, and still have the space between the tables was really great.”

Throughout its 16 years in business, the Bar Willow Eatery has used tents during the summer to protect guests from the elements, particularly the high winds the patio experiences.

The owners assumed winter would be no different, but they said last week the City of Regina contacted them with some concerns.

“They said there’s a bunch of permits and monthly charges that need to be done, and different permits that they needed us to process,” Carter said. “So they asked us to stop using the tents immediately or take them down.”

The owners said it would cost thousands of dollars to complete all the steps the city is asking for and they can’t afford it given their financial situation as the pandemic carries on.

“We only have about 20 seats inside, which isn’t very much and doesn’t pay the bills,” Carter said. “We’re feeling a bit defeated right now.”

The owners said they understand the rules have to be followed and they don’t blame the city for this situation, but they wish they were given options instead of being forced to remove their tents.

“It’s just the idea of red tape and extra fees at a time when we can’t afford other things,” co-owner Darren Carter said.

In an emailed statement to CTV News, the City of Regina said building permits are required to make sure buildings and structures comply with provincial legislations.

“A Temporary Building Permit is required to erect a tent or other temporary shelter as part of a public gathering, for example a charitable event, church gathering, summer fair or beer garden,” the statement said. “Upon safety and code compliance, the City of Regina’s temporary building permit if $138 per month.”

The statement said it commonly is notified of non-permitted construction and then notifies the owners to work collaboratively to achieve code compliance.

“Permitting a large tent, such as the one at Bar Willow Restaurant, ensures it is structurally safe and meets other code requirements for exiting, fabric flame spread, fire propagation to other structures and open flame heating requirements,” the statement said.

The City said it is committed to working with businesses to ensure it can issue the proper permit in a timely manner and explore options of payment.

Phase 2 of the Economic Regina Recovery Grant is scheduled to start in January. The grant provides up to $25,000 for longer-term diversification initiatives.

“We will work with Bar Willow to ensure they can access applicable funds through this grant,” the city’s statement said.

Cheryl Stadnichuk, the newly elected councillor for Ward 1 where the restaurant falls, said proper permitting is important. She said locally owned businesses are important to the city, and she hopes to work with the city and the restaurant to find a solution.

“I’m hoping we can figure out a way to give [Bar Willow Eatery] some options so they can do something outside that is safe and meets all the requirements,” Stadnichuk said.

She said there are city and provincial grants that could be an option for the restaurant.

In the meantime, the owners of Bar Willow Eatery are hoping to see more support as the government’s restrictions continue to make survival difficult for locally owned businesses.

“Whether it’s local support, city support or provincial support, there just needs to be a bit more because we’re not going to make it through the winter.” she said.

The owners are reminding the public how crucial supporting local is.

”Everyone is struggling with this, we’re not the only ones. Everyone has less in their pockets to pass around the economy so it’s a whole thing,” she said. “At the end of the day, you don’t want just your big box stores left.”