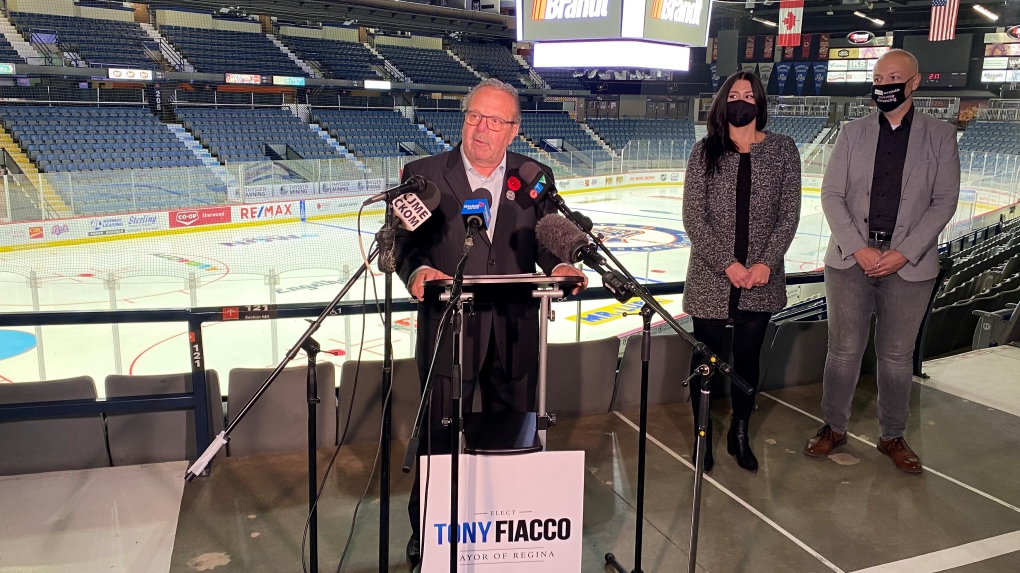 “REAL operates on a razor-thin profit margin and because of the financial impact of COVID, that margin will actually be operating on a forecasted loss of $7 million in 2020,” Fiacco said.

Fiacco pointed to the financial difficulties faced by REAL, calling for more funding to help the group, which runs Evraz Place.

“REAL needs $45 million in maintenance that it currently can not afford,” Fiacco said. “The building we are standing in right now is 43 years old and needs major work. There needs to be a solution.”

Fiacco pledged to work with REAL and the team of councillors elected in next month’s election to find solutions, starting in the first weeks of taking office.

“The City of Regina has made no headway, that we can see, towards solving REAL’s short term cash crunch or long-term maintenance deficit. We believe that this shows a lack of leadership from the top office at Regina City Hall,” Fiacco explained.

The second-time mayoral candidate criticized other candidates who are suggesting new recreation families in their platforms.

Wednesday, fellow mayoral hopeful Sandra Masters promised a new aquatic centre by 2024, with an estimated $85 million price tag to be split by all three levels of government and private donations. Fiacco criticized that plan

“$85 million for a swimming facility, that’s why I speak today is because we need to address the ridiculousness of new spending when we are not taking care of the priorities that the citizens of Regina are saying,” he said.

In addition to keeping property taxes low and maintaining sidewalks and sewer lines, Fiacco highlighted the need to keep up with necessary maintenance on existing facilities over spending money on new builds.

“We need to remember that REAL is an important part of our sprawling downtown. It is part of our city’s key infrastructure assets and it is at the heart of Regina’s hospitality industry. That’s why we are here today, to highlight the dilemma facing a cash-strapped REAL,” Fiacco said.

Fiacco also announced that, if elected, he would take a salary reduction and suggested the City adopt a writ period, similar to that followed by the provincial government, that would prohibit City Council from dealing with any new business for two months before the municipal election.