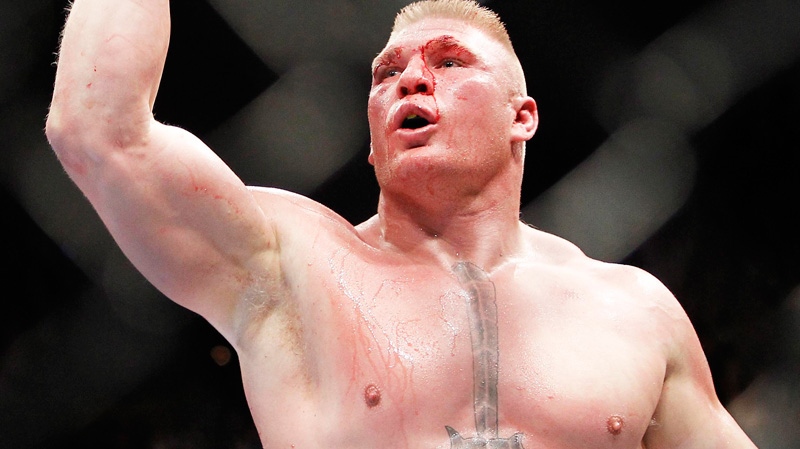 Saskatchewan Premier Brad Wall jokes that if former UFC heavyweight champion Brock Lesnar moves to the province, Lesnar can pretty much pick any house he wants.

Wall made the comment in a speech Thursday to a Regina business crowd that included the U.S. wrestler and retired mixed martial artist.

"He likes Saskatchewan, he told me, in fact he comes here regularly," Wall said after the speech.

"He told me he's not ruling out moving here and he just wanted to check out, I guess, the political situation and the economic situation. It's what he told me and I wasn't about to challenge him on any of his answers."

Lesnar said he was visiting his brother's farm in Maryfield, southeast of Regina, near the Manitoba boundary, to help with the harvest. He found out about the luncheon and decided he wanted to hear what the premier had to say.

"I eventually want to become a Saskatchewan resident and ... I just want to learn a little more about the province," he said.

"I grew up on a farm. I love the country. I like the wildlife. I like everything that Saskatchewan has to offer."

It seems a far cry from when Lesnar fell ill on a hunting trip to Manitoba and, in January 2010, criticized Canadian health care as being no better than in "a Third World country."

In his autobiography "Death Clutch," released in 2011, the mixed martial arts star describes his painful stay at a Brandon hospital in late 2009. Lesnar says he suffered because the hospital's lone CT machine was broken, meaning doctors were unable to find out what was causing his stomach pain.

At the time, the CEO of the Brandon Regional Health Authority said the hospital was well-equipped and modern with skilled, trained staff.

Lesnar and wife drove across the border to a hospital in Bismarck, N.D., where he was diagnosed shortly thereafter with diverticulitis, a digestive disorder.

"It could have happened anywhere," he said.

"That doesn't deter me from becoming a Canadian citizen, no it doesn't. It's one of those things where it probably could have been anywhere and you know, who knows (what would have happened). It was just circumstance and that's all it was."

Lesnar said "in the near future," he would like to get dual citizenship and live in Saskatchewan full time.