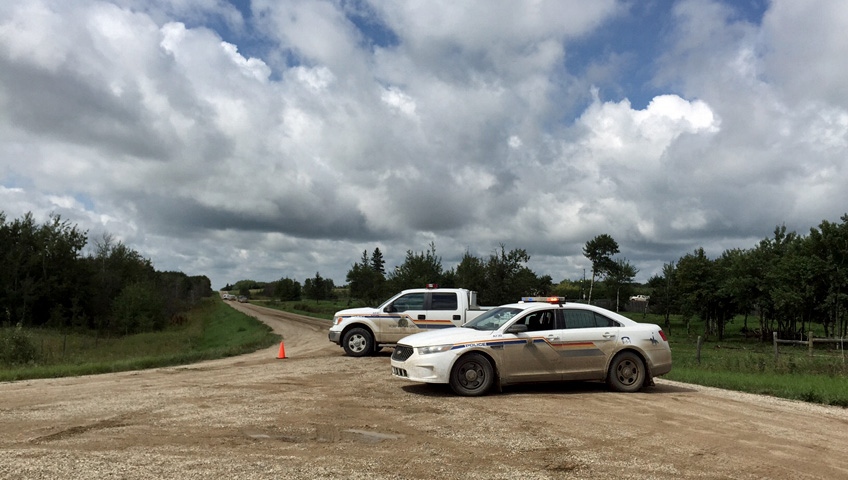 RCMP cruisers block a gravel road in the rural municipality of Glenside on Thursday, Aug. 11, 2016, following a fatal shooting days earlier on a nearby farm. (Taylor Rattray/CTV Saskatoon)

Colten Boushie, 22, was killed Tuesday after the vehicle he was in drove onto a farm in the rural municipality of Glenside, west of Saskatoon.

Boushie's cousin, Eric Meechance, said he and three other friends were also in the car, heading home to the Red Pheasant First Nation after an afternoon spent swimming at a river.

But Meechance said they had a tire blow out and that's how they ended up at the farm.

Meechance said they tried to drive away, but ended up colliding with a parked car. He then ran for safety as gunshots rang out.

Gerald Stanley, 54, is charged with second-degree murder. He is to make his next court appearance in North Battleford on Aug. 18.

The first police news release said that people in the car had been taken into custody as part of a theft investigation.

Chief Bobby Cameron of the Federation of Sovereign Indigenous Nations said the RCMP statement "provided just enough prejudicial information" for people to draw the conclusion that the shooting was somehow justified.

"The messaging in an RCMP news release should not fuel racial tensions," he said.

Chief Clint Wuttunee of the Red Pheasant First Nation said the media's initial portrayal of the event, based on the RCMP release, made the incident sound like a crime was about to be committed by the passengers in the car.

“It is deeply concerning for us as the provincial police service to hear one of our media releases categorized as biased and not in line with the relationship we have with the FSIN and all the communities we serve,” he said.

“We have heard the concerns of the FSIN and we welcome the opportunity to discuss them and work together to address them. The FSIN is one of our essential partners and we value this partnership and their input greatly.”

Supt. Cameron added that the RCMP’s relationships with its partners and the communities it serves are critical in police efforts to keep Saskatchewan safe.

“Without this ongoing support, it would be difficult, if not impossible, for all of us to contribute to communities where we can feel safe and secure,” he said.

“It is a priority for us to work to contribute to the long-term wellness and safety of Saskatchewan communities through an inclusive and culturally competent police service.”

Supt. Cameron noted that over the past few days there have been comments made on social media that are concerning and could be criminal in nature.

“It’s understandable that during a situation like this emotions run high, but it is important to let the court process run its course,” he said. “Therefore, I ask everyone to remain respectful in their online communication.”

The FSIN wants a review of the RCMP's communication policies and writing guidelines.

National Chief Perry Bellegarde, with the Assembly of First Nations, said he was particularly disturbed by "racist, derogatory comments" about the incident on social media. It's a stark reminder of "how much work we have to do to eliminate racism and discrimination," he said.

"In too many ways, this is a sad day for Saskatchewan," he said in a statement.