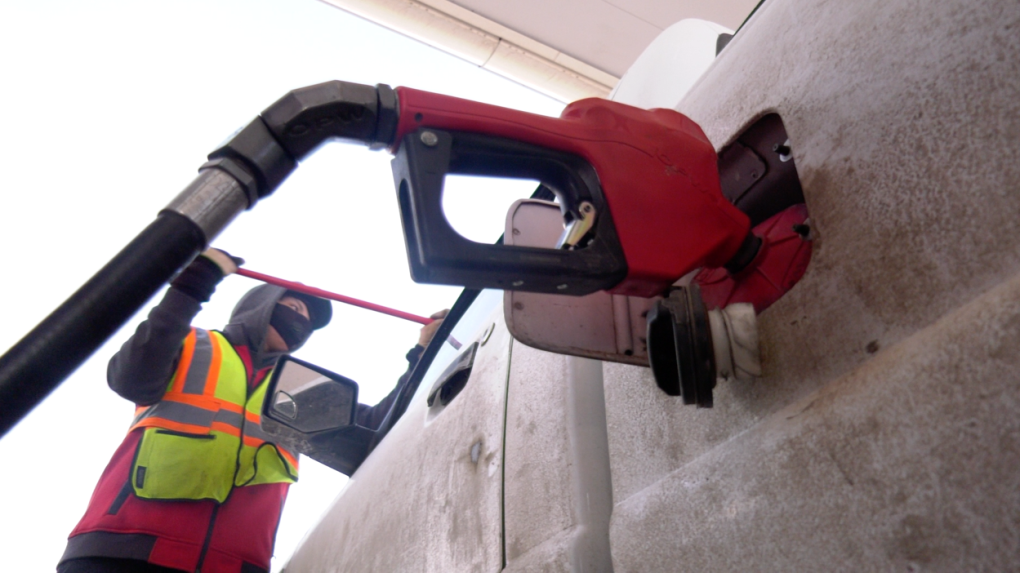 A person fuels up in Saskatoon on March 31, 2021. (Nicole Di Donato/CTV Saskatoon)

After some relief from record high gasoline prices over the summer, it appears prices are on the rise again.

In Regina and Saskatoon prices are expected to rise another 11 cents and reach $1.75.9 for regular unleaded before the end of the week, according to Gaswizard.ca. Some stations have already climbed to $1.75.

Diesel is expected to stay flat in Regina, with the average cost currently $1.99.9.

Regina and other parts of Saskatchewan saw regular gasoline prices climb as high as $2.08 per litre earlier this summer.

Recently the average price for regular gasoline dropped as low as $1.53. in the Queen City.

The increase is not a surprise to everyone, Dan McTeague, the president of Canadians for Affordable Energy, said that prices would eventually climb closer to where they were early in the summer during an interview in August.

“Going forward I think we’re going to be looking at prices bouncing back, not as much as they did but certainly coming back to where we saw them a little while ago,” he said.

Transport Minister Omar Alghabra says the upcoming holiday travel season is sure to be a busy one, but that he’s working with air travel stakeholders to ensure the summer’s flight cancellations and lost luggage problems aren’t repeated.

As Canada enters the fifth week of the flu epidemic, influenza activity is rising, with mainly young children and older adults facing the brunt of the strain, according to the latest FluWatch report.

US knocked out of World Cup, loses to the Netherlands 3-1

Memphis Depay and Daley Blind scored in the first half and Denzel Dumfries added a late goal as the Netherlands eliminated the United States from the World Cup with a 3-1 victory Saturday that advanced the Dutch to the quarterfinals.

Canada features in list of 23 best places to go in 2023, according to Conde Nast Traveller

Canada's British Columbia features in a list of the 23 best places to travel in the world in 2023. The list was created by travel magazine Condé Nast Traveller.

Chinese authorities on Saturday announced a further easing of COVID-19 curbs with major cities such as Shenzhen and Beijing no longer requiring negative tests to take public transport.