REGINA -- Friends, family and community members are mourning the loss of local chef Warren Montgomery, who died in a Regina hospital on Tuesday after a fight with COVID-19.

Montgomery, 42, was originally from Louisiana. He was the owner of The Big Easy Kitchen, which offered “simple, southern comfort food with local and authentic southern ingredients,” according to its Facebook page.

Roshelle Montgomery, Warren’s wife, met him online in 2010. They were married a few months later. 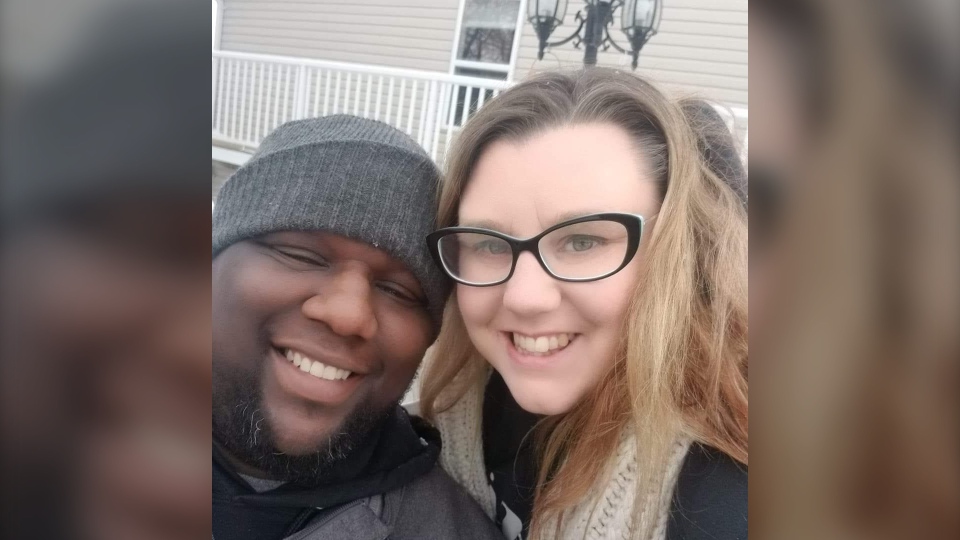 “Anyone who knows him is attracted to him. He is a big personality,” Roshelle said.

Together, they had two daughters, ages nine and five.

Brandon Brooks, Montgomery’s best friend who is also from Louisiana, said they met in 2011 at a Football Saskatchewan coach's convention and became immediate friends.

“I was wearing my New Orleans Saints hat and all of a sudden I notice this brother from across the room just staring at me,” Brooks said.

During a break, Brooks said Montgomery told him he was also from Louisiana.

“You don’t see many guys up here from Louisiana unless they’re coming up here to play ball. We hit it off right away,” Brooks said.

Brooks said as a person, Montgomery was open to doing everything.

“He came up to Saskatchewan and he entrenched himself into the culture of being a proud Saskatchewan and a proud Canadian,” he said. “I salute him for that. But he always kept his authenticity about him being from Louisiana.”

“He was a really, really fun guy to be around.”

Montgomery is well-known in Regina for his cooking. Rochelle said his passion for cooking came from his mom and that his hard work towards building a career in the kitchen was endless. 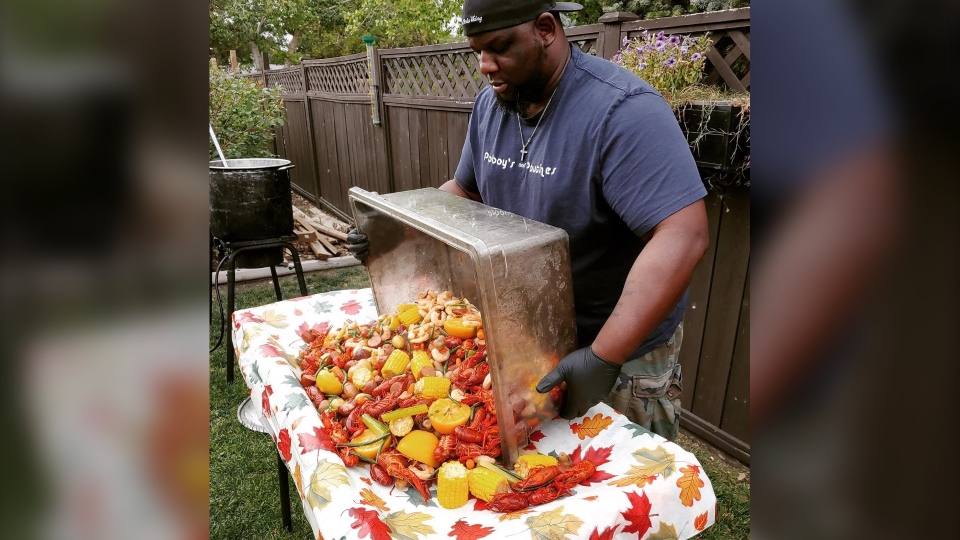 Montgomery’s passion for cooking is something that Brooks said stood out.

“When he first started cooking, it wasn’t doing as well as we thought it would do. So I was always that friend of his that was trying to tell him ‘look, if this cooking doesn’t take off for you, maybe look into something like a nine to five to make sure the bill and stuff get paid,’” Brooks explained. “His stubbornness was the key to his success.”

Brooks said over the past year, they really started to see the business take off.

“He really started to find his peak. He was really starting to do well,” he said. “If he would have listened to me or anyone else telling him to pause it, he never would have became the person that we all loved and admired.”

Early in April, Montgomery, Roshelle and one of their daughters tested positive for the COVID-19 U.K.

“We suspect I got it at work,” Rochelle said. “I was the first to test positive in our family. I got my test results back on Easter Sunday.”

The rest of the family got tested and the two other positive results came back.

“Him and I were sick together for quite a while. We were both really sick. I’d never been so sick in my life,” Roshelle said. “Our daughter, luckily, did not. She had a fever and a headache on and off for a few days, and that was it.”

When Roshelle started to turn a corner, Montgomery did not. She called 911 twice because of his condition. The second time, he was taken to the COVID-19 ward in the hospital.

“He just wasn’t doing well. He was on the maximum oxygen and the maximum medication they could do,” she explained.

He continued to decline. She said he was eventually intubated and sedated, and was then brought to the ICU.

“He then had a major stroke and at that point, there wasn’t a lot they could do,” Roshelle said.

Following the stroke, the family was told if he recovered from COVID-19, he would need to be in a care facility for the rest of his life and would need a feeding tube.

“He wouldn’t want that, so we had planned to take him off the machines the following day,” she said. “He took that decision out of our hands because the following morning, I got a phone call that he was declining and that I’d need to get to the hospital right away.”

Roshelle got there and called his family members so they could call him to say their goodbyes.

“I spent the morning with him. They took his tubes out and I stayed with him until he passed,” Roshelle said.

She said the ICU experience was surreal because of how busy it is.

“The people who work there are amazing, I don’t know how they’re managing,” Roshelle said.

Brooks said he first learned Montgomery and his family caught COVID-19 through a phone call.

“I called Warren to get his opinion on something and that’s when he told me he and Roshelle were isolating because they came down with COVID,” Brooks said. “We had been communicating and everything was fine, and then it just seemed like everything took a turn for the worst.”

Brooks said Roshelle was providing him updates on Montgomery’s condition.

“The last time I talked to him, he told me he was scared and stuff. I told our friends -- we have a lot of friends in the same circle -- to flood his messenger with messages to tell him to stay positive,” Brooks said.

Brooks said every day he seemed to get worse.

“The next thing you know, we find out he passed away,” Brooks said. “He’s only 42 years old and I think this week would have been the week for him to get his vaccination, which makes it even more crushing.”

In a message on The Big Easy Kitchen’s Facebook page on April 11, Montgomery made a post about his experience.

“It’s not a common cold, COVID is real. I’ve been battling COVID for six days and yesterday was my scariest day,” it read in part.

“People just have to stop playing games and just listen to the science and do what’s told,” Brooks said. “No matter how you feel about the situation, I don’t want anyone in the situation that his family’s in and his friends like myself are in right now. It’s real.”

Roshelle said she had been experiencing COVID-19 fatigue before the family was diagnosed.

She wants this experience to encourage others to take it seriously and to get vaccinated when they can.

“I would never want anyone to go through what my family is going through,” she said.

Multiple fundraisers were launched in support of the family as they fought COVID-19.

Brooks said it’s important for the public to still contribute if possible as the family now deals with Montgomery’s death.

The GoFundMe page continues to collect donations and has far surpassed its original goal.

Many local businesses, including the Meld Neighbourhood Eatery, have launched fundraisers for the Montgomery family as well.

Before Meld was what it is today, it ran as a rotating kitchen, offering a space for entrepreneurs to cook and sell their food. Montgomery was their first regular rotating chef.

Tim Shultz, the co-owner of Meld, said he did that for almost a year. 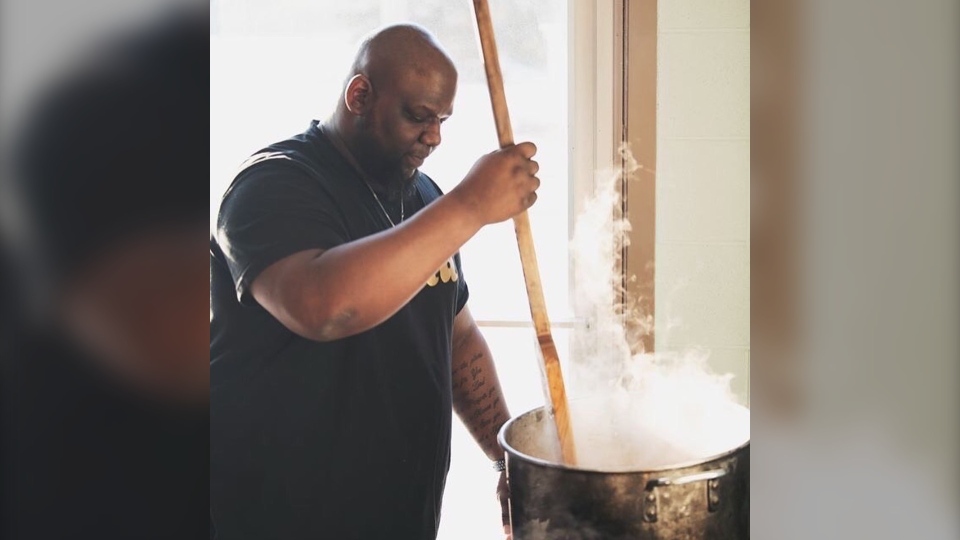 Shultz said when he learned on Saturday that Montgomery was in the intensive care unit, he had to help.

“We knew that we had a platform and we had the ability to pull the community together,” Shultz said. “We came up with the idea to do a taco platter fundraiser.”

The fundraiser sold out within hours after its launch. Shultz said they’re still finalizing details, but the money raised will go directly to the family.

When Shultz learned on Tuesday that Montgomery had died, he was gutted. He said he will make sure his legacy continues.

“He had such a huge impact on Regina and this community,” Shultz said. “His memory is going to live on in The Local Market YQR.”

Roshelle said she is overwhelmed - in a good way - by the support that has been coming in.

“We didn’t know he had so many friends,” she said with a laugh. “I don’t even know everyone who has donated and supported and reached out, and I don’t know how I’m going to thank them all.”