REGINA -- Even though it’s been a mystery for 25 years, Saskatchewan coroner Jerry Bell still desperately hopes he can solve Regina’s John Doe case.

It’s the only case Bell has unidentified, and he hopes one day he can bring closure to everyone involved.

“I hope, and I mean this from my heart, that I can put a name to John Doe, and then I will retire,” said Bell on Tuesday, which marks the 25th anniversary since John Doe’s death.

“He’s my only case that I have unidentified, and I hope I can connect John with his family,” he said.

The unidentified man died after being hit by a train on July 28, 1995.

On that day, CP Railway employees told police there was nothing they could do to stop the train.

They said a man appeared on the south side of the tracks and deliberately laid down in the direct path of the eastbound locomotive, which was towing 144 boxcars.

The man died instantly and, despite efforts by local authorities, has never been identified.

Bell responded to the scene, which occurred on a section of CP Rail east of the intersection at 13 Avenue and Courtney Street in Regina.

He said the Coroners Service checked the victim’s fingerprints against local, national and American records, but came up with no results.

His body showed no surgical scars, tattoos or traits that could help identify him, Bell said.

As well, no missing people from the area matched the description of John Doe. Police gathered extensive photographs, x-rays, dental charts and DNA samples hoping to confirm the identity.

He said the death has had a tremendous impact on the people who were involved in the incident.

“They couldn’t do anything,” Bell said. “That train was moving and John walked up onto the tracks and they had to visualize that and observe that and the impact is tremendous.” 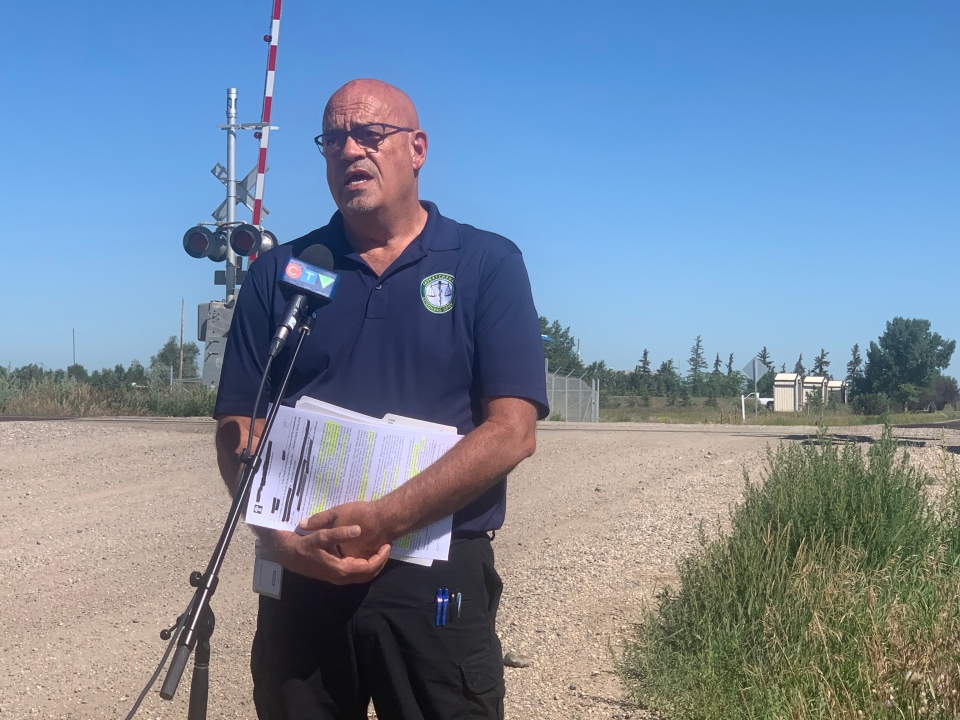 Jerry Bell is pictured near the site of John Doe's death, 25 years ago.

A spokesperson for RPS explained that the investigation is rare, and that it elicits an emotional reaction.

“It’s clear from the reports and the witness statements and the observations that he was quite deliberate in his actions. That he lay down in front of an eastbound train to end his life, and that makes me feel very sad,” said Elizabeth Popowich, spokesperson for RPS.

While his death is a mystery, police believe there is a family somewhere that is wondering what came of their son, brother and friend.

“I cannot imagine a family out there not knowing,” Popowich said. “For us, on a professional level but also on a personal level, it’s really important to try to find out who he is and try to give his family some closure.”

Popowich said police remain hopeful a key piece of evidence will someday come to light, whether it’s through someone’s memory or found by newer technology.

“Here we are 25 years later, and we still have a cold case investigator who is working on this file and still trying to develop some new avenue of investigation,” she said. “Perhaps technology has changed, and maybe people’s recollection has changed. Some new piece of information that could solve the mystery of who this young man is.”

Bell said this is the only case in his 36 year career that remains a mystery.

“Usually within 24 to 48 hours we have positive identification. I can honestly tell you, I’ve been a coroner since 1984, this is my only case where I don’t have a name to the investigation that I’m working with,” Bell said.

“To be able to put him to rest, with his own name, the name his parents gave him… I think would bring closure to all of us,” Popowich said.

Bell said he’s holding out on retirement because we wants closure for family and people involved in the incident.

“To know that there was a connection back to family would mean a lot to them,” Bell said. 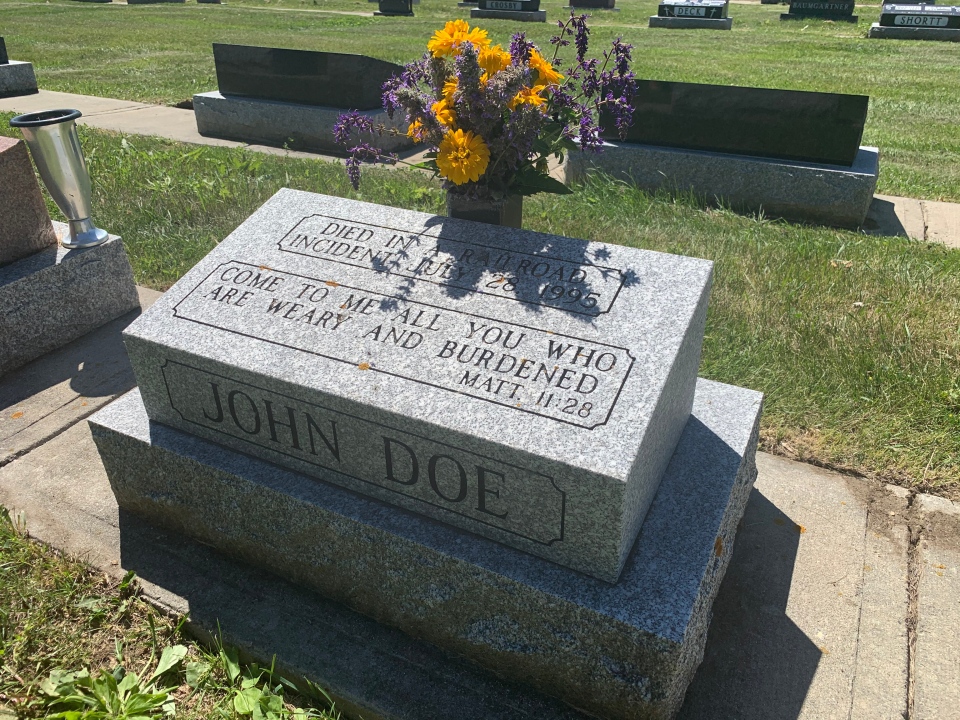 Inscribed on the unassuming headstone is a line from Matthew 11:28, along with a brief description of the mysterious circumstances of his death.

“Come to me all you who are weary and burdened.” it reads. 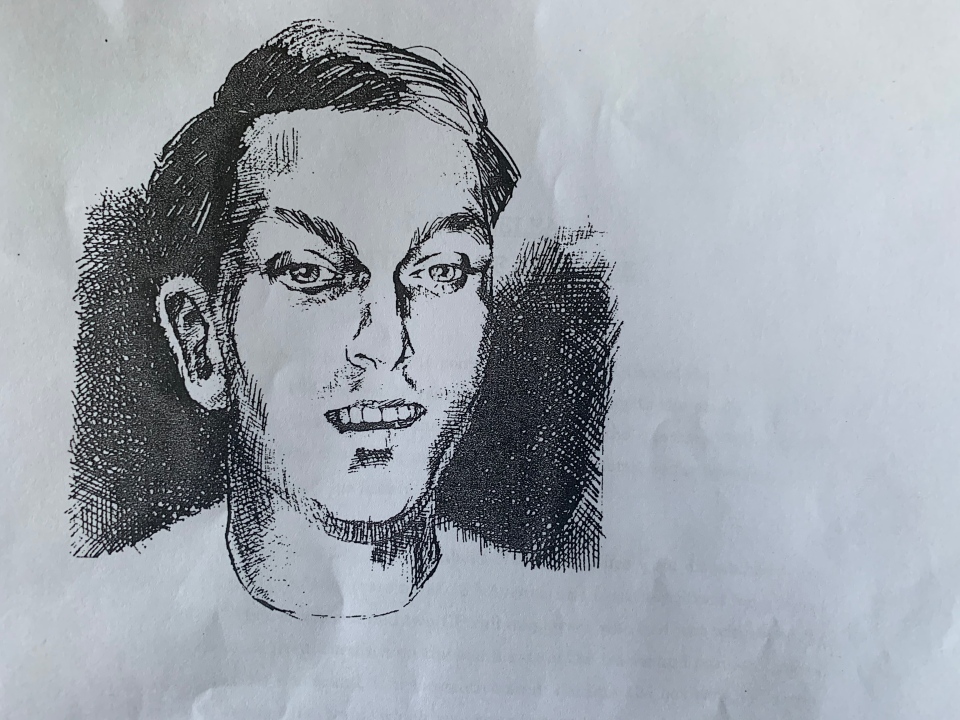 This composite drawing of John Doe was created by Gail Duesterbeck of the Regina Leader Post in 1995. It was released to the media for distribution at the time. Supplied: Regina Police Service

John Doe was a Caucasian man, roughly 20 to 30 years old. He was clean-shaven, with medium brown hair and blue eyes. He was about 5’9” and weighed between 140 and 160 lbs. John Doe wore a black denim buttoned shirt, which had a gold Crown logo displayed on the left breast pocket. He wore a white t-shirt underneath that read “Boca Authentic” across the front. He was also wearing faded blue jeans, white socks and a pair of 12.5 size blue and white Reebok runners. Police note that his actual foot size was closer to a 10.

The victim had no personal identification on him. Police believe he may have lived a transient life, given he had a backpack with clothing and other items inside. 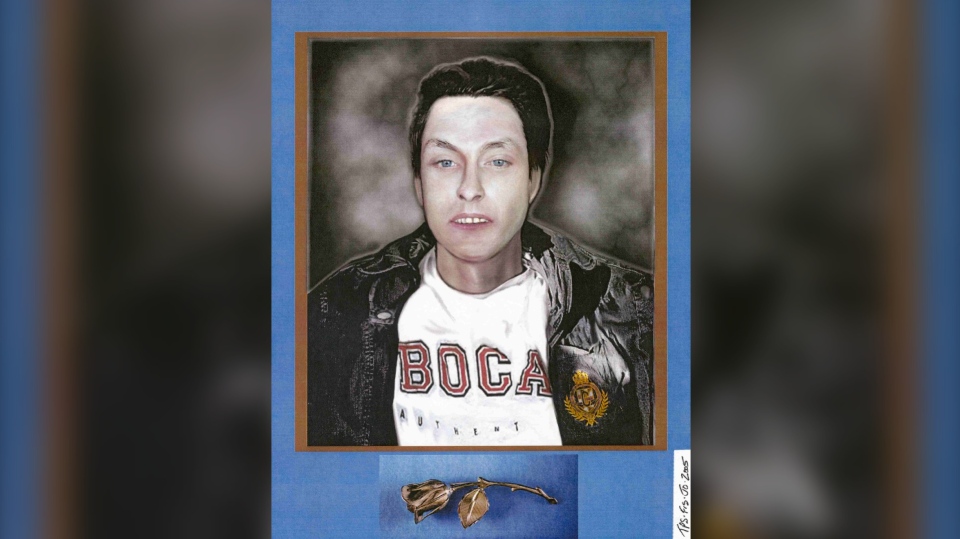 This digital rendering of John Doe was done by Jo Orsatti, a police artist for the Toronto Police Service in 2005. Supplied: Regina Police Service

Saskatchewan RCMP’s missing persons unit has many tools to help assist in the province’s approximate 130 open cold cases. However, cases become more difficult to solve as time goes on.

The length of the investigation, the age and whereabouts of key witnesses, the existence of key evidence and its level of deterioration all have a significant ability to impact an investigation.

“We’re always optimistic of being provided new leads and gaining new investigational avenues,” said Cpl. Brendan Chartier, Saskatchewan RCMP missing persons co-ordinator. “We have new tools and new techniques that have come into place that help us do these things.”

This new legislation in Saskatchewan influences how law enforcement are able to access information about missing person’s cases. This allows police to apply to the courts to gain access to information regarding a person who cannot be located. This information includes financial records, telephone and communication records, global positions, system tracking records, health information, pictures and any other information deemed appropriate by a judge.

The National DNA Databank allows RCMP to upload DNA profiles to a national service which compares samples to others across the country, creates matches and identifies missing people from all over Canada.