'He was burying the cat alive': Family steps in to stop alleged abuse of kitten

REGINA -- A kitten is on the mend after he was found by a concerned citizen on Tuesday, allegedly being buried alive by a teenager.

Dawn Clarke and her family were driving in the area of 7th Avenue and McTavish Street in Regina when something caught her eye.

“We saw a teenager in the back alley with a kitten, and I told my husband and we were very concerned because it was very cold out that day,” Clarke said.

They drove back around to check out the situation, initially wanting to offer the teenager help if he needed it.

Clarke said she didn’t hesitate to act, and jumped out of the car.

“He told me he couldn’t take the cat home so he was killing it the snow because it’s natural selection,” Clarke said. “I managed to get the cat away from him and we took it back to the truck.”

She said the kitten was wet and cold. She guesses he’s about 10-weeks-old.

Clarke said she then called the Regina Humane Society (RHS) and Regina Police Service to report the incident.

“By the time they got here, the guy was already gone,” Clarke said. 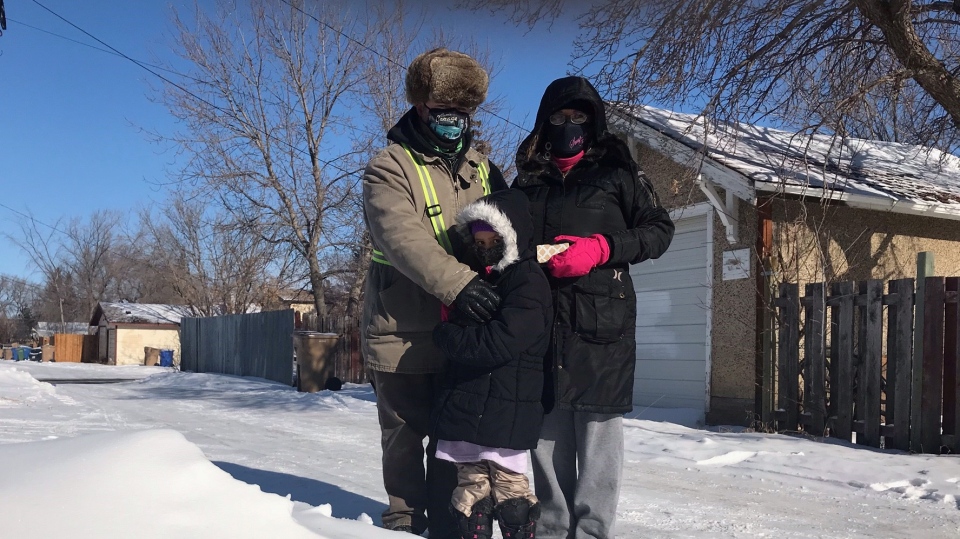 The Clarke family stands in the alley where they say the alleged abuse took place. (Stefanie Davis/CTV News)

The Regina Alleycat Rescue organization took the kitten, now known as Raven, to the vet. He was treated for an infection, mites and worms. He’s now in the care of a foster home and is recovering.

Bill Thorn, director of marketing and public relations with the Regina Humane Society, said they received the call and were dispatched to investigate.

Thorn said there were no further details on this specific case, but said unfortunately, calls reporting animal neglect, abuse or cruelty are not uncommon.

“It does go up and down, but we get about 600-700 calls per year,” Thorn said. “Not all of those are animal cruelty but those are calls for assistance from animal protection officers, so a good chunk of those could be involving harm to an animal.”

Thorn said the RHS will investigate every report that is received.

He said at this time of year, it’s important to report any concerning situations because the risk for animals is high due to the cold temperatures.

“Our domestic animals like dogs and cats are simply not built to survive out in weather like this,” Thorn said.

The Clarke family said they’re just happy they were in the right place at the right time.

Clarke said she wanted to share their experience to warn others.

“We have people that are out there just to harm animals and if you can keep them inside where they’re nice and safe, it’s just a better day for everyone,” Clarke said.