'He was invisible': Parents who lost son to suicide looking for fixes to mental health system

REGINA -- The parents of Steven Rigby, 27, who died by suicide on Dec. 22, 2018, are looking for changes in the health care system they say failed their son.

Steven had been struggling with his mental health and had been admitted to hospitals before for prior suicide attempts.

On Dec. 18, 2018, he was admitted to Royal University Hospital because of another attempt.

On Dec. 19, he was admitted to the Dube Centre. Records his parents obtained from the centre show that he had admitted to having suicidal thoughts, which included provoking police to shoot him. The next day, Steven was released. On Dec. 22, Steven ended his life from suicide by cop. 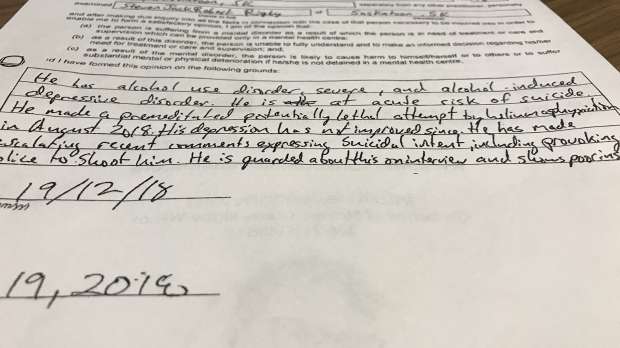 His parents are now pushing for changes. His mother, Carey Rigby-Wilcox, said his wish to her was to fix it so no one else has to go through the same situation.

“My hope is, honestly, that somebody looks at the whole entire files of Steven’s health file and records, because he should have never got to that day,” Rigby-Wilcox said.

“We should have the right as parents – if our son says yes I want my mom and dad in here and helping me on this journey,” she said.

She added more doctors’ signatures should have been required to release Steven from the Dube Centre on Dec. 20.

Rigby-Wilcox said she believes Steven was not truly seen by those working in the health care system.

“He was invisible because he was well-dressed, and most of the stuff in his file shows that he could communicate right,” she said. “He felt that because he looked a certain way they didn’t believe him.”

She said he thought he was a burden because some people don’t understand mental health and addiction.

Steven’s parents are hoping the province holds an inquest into his cause of death, and also into the health services leading up to the day he died.

“I’m willing to hand his papers over for everybody to use those as a study of what not to do, and where the mistakes were and fix that,” Rigby-Wilcox said.

NDP leader Ryan Meili said a full review of the mental health care system in the province is necessary, as people who need help continue to fall through the cracks.

He said a mental health and addictions stream of emergency health care would be a good place to start.

“The establishment of dedicated mental health and emergency rooms, so that when people come in that moment of crisis, we can take some pressure off our regular emergency rooms, but also make sure that they are seen,” Meili said.

Health Minister Jim Reiter said he can’t talk about specific cases, but he did acknowledge more needs to be done for mental health support in Saskatchewan. He added some changes are on the horizon.

Reiter said he has had multiple conversations with Steven’s parents, and calls this situation a “tragic case.”

Steven’s parents are hoping this pressure to fix the cracks in the system will lead to change, and will prevent another family from going through the same situation in the future.