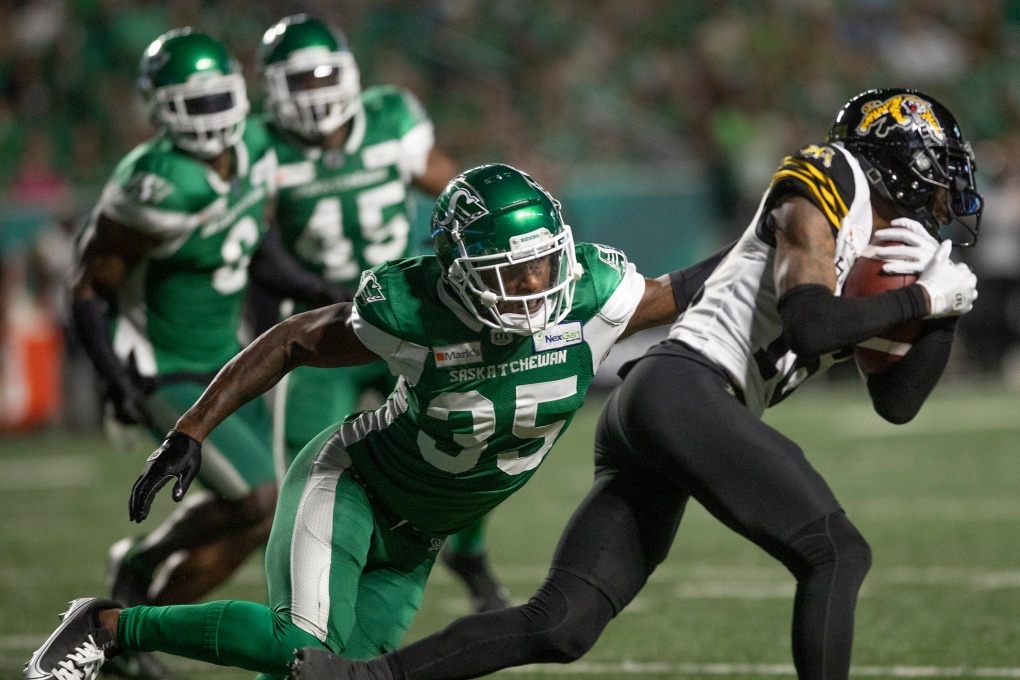 Hamilton Tiger-Cats wide receiver Brandon Banks (16) runs the ball past Saskatchewan Roughriders defensive back A.J. Hendy (35) during the first half of CFL football action in Regina on Saturday, August 14, 2021. THE CANADIAN PRESS/Kayle Neis

Five players who spent time with the Saskatchewan Roughriders are taking their shot at the XFL when the league relaunches under new ownership in 2023.

The current iteration of the XFL began in 2020 before being forced to cancel its season partway through due to the COVID-19 pandemic.

A new ownership group that includes Dwayne “The Rock” Johnson took over later that same year, holding their start up draft last week.

Most of the former Riders selected were only with the team for less than one season.

With a pick that showed an inclination for initials, 27-year-old wide receiver K.D. Cannon was selected by the D.C. Defenders in the third round.

Cannon played in six games for Saskatchewan in 2018 and 2019. In his second season, he caught 11 of 12 passes for 149 receiving yards but did not mark a receiving touchdown during his CFL run.

Another wide receiver who wore green and white in a few regular season games, 27-year-old Rashard Davis was taken by the Seattle Sea Dragons in the seventh round of the XFL draft.

Davis only spent one season in Saskatchewan, appearing in four games and catching one of three passes for 12 yards.

Signing with the Roughriders in May, 25-year-old Dieuly Aristilde Jr. will now try his hand at receiver for the XFL’s Orlando Guardians.

Selected by the Guardians in the tenth round, Aristilde was cut by the Riders in July after several preseason appearances and one regular season game where he did not record a catch.

Defensive back A.J. Hendy is now a member of the Houston Roughnecks, drafted in the 14th round.

This is not Hendy’s first XFL stint: he was a member of the New York Guardians in the league’s previous iteration before signing with the Roughriders for 2021.

During that season, he made 14 defensive tackles over 11 games and recorded one interception.

Hendy re-signed with Saskatchewan in March 2022 but did not make it past the final round of roster cuts in June.

Get ready for A.J. Henry, he’s a comin!! pic.twitter.com/mgoMmpTTfV

Offensive lineman Tommy Champion never played a regular season game with the Roughriders, but now he’ll try and become a staple of the Roughnecks offensive line.

Champion did appear in the 2022 CFL preseason, but was cut by the Riders in June.

Heeey Tommy 👋🏽 We like that last name of yours 👀 pic.twitter.com/N66dz2Puom

Prime Minister Justin Trudeau is presenting the federal government's offer for billions in new health-care funding to the provinces and territories at a highly anticipated meeting in Ottawa today. At the first in-person meeting of all First Ministers in years, Trudeau is set to outline how much money his government is willing to provide, and what his expectations are for improving care.

Ottawa says Canada will contribute $10 million to earthquake relief efforts in Turkiye and Syria as part of an initial aid package.