The creator of 22Fresh, one of Saskatchewan’s biggest clothing brands, got his start as an entrepreneur in high school.

“Some friends and I, and my wife was actually included, we started a clothing company called Weasel Designs,” 22Fresh president Kip Simon said.

With the help of a local seamstress, they embroidered hoodies and set up shop from the trunks of their cars.

“We sold them in the parking lot after school,” Simon said.

A few years later, he was playing college sports in the U.S. It was at that time Simon identified a void in athletic fashion.

He decided to rekindle his entrepreneurial drive and mix it with his passion for sports.

“22Fresh was a brand created out of necessity for me. I was an athlete playing baseball down in the States and I thought that there was always an element missing to some fashion for the traditional athlete to wear off field,” Simon said.

“We had all the nicest stuff on the field, then when we got off the field we were always wearing brands that didn’t really relate to the sports that we were playing.”

Simon moved back to Saskatchewan after college. He talked to some local entrepreneurs in the industry, and 22Fresh officially launched.

“Fifteen years later, here we are with a brand that’s inspired by athletes and literally made for street and sport,” Simon said.

“My jersey number when I was playing college sports was 22,” Simon explained. “And Fresh, I don’t think there was a millisecond of thought. It just kind of rolled off the tongue. It felt good so we just rolled with 22 Fresh.”

PARTNERSHIPS ALONG THE WAY

Throughout the years, 22Fresh has teamed to work with sports organizations at all levels – from local minor teams to professional clubs, including the Saskatchewan Roughriders and the Toronto Blue Jays.

“Any time we can align ourselves with a group of people, especially in athletics, that are working hard toward a common goal and really align our two brands, that’s really special for us and that’s part of our growth strategy,” Simon said.

That strategy paid off this month. 22Fresh announced one of its biggest partnerships to date with Bauer Hockey.

“We’ve done some hockey related stuff in the past but we just felt that we wanted to push it further and work with a brand that had similar values as we did,” he said. “I think this is one of the biggest partnerships for us, just in terms of the global awareness of a brand.”

The partnership got started from a cold call 22Fresh made to the hockey company. They scheduled a meeting, put together a presentation and a deal was made.

Simon said the clothing line has been well received so far and is helping expand the brand into the United States.

“To see it on the backs of NHL superstars is what keeps us going – that reach and the potential to keep growing,” Simon said. “To align with literally the biggest brand in a sport is getting our name out there, especially in bigger markets.” 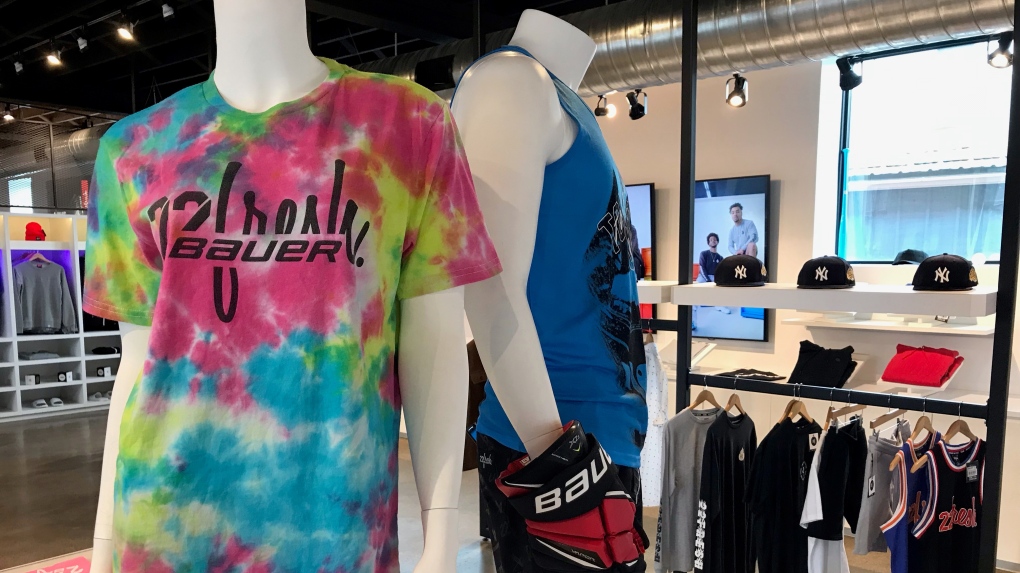 Kenedi Klein, the customer experience manager with 22Fresh, said there has also been local support for the new line.

“A lot of our customers are lifetime customers. We get to build different relationships with them and get to know them. They’re so proud of us and get to support us which is awesome,” Klein said.

She said the Bauer partnership has also caused an increase in out-of-town customers coming to Saskatchewan store fronts.

It has also caused a spike in custom team orders.

“We’ve been rolled out for a few weeks and already in that short timespan I have noticed an uptake in interest in working with us on a custom level from outside of the province,” Bob Millette, the squad sales representative with 22Fresh, said.

“Most of our custom sales come from within Regina or around the province, so to start to get some calls from around North America has been super exciting for us.”

When 22Fresh first started, only a handful of people worked for the brand.

Now, about 50 staff members are employed. Simon credits a big portion of the company’s success to the diverse staff, who he said never hesitate to bring opinions and ideas forward.

“It takes a big team of people to keep pushing forward and not be idle,” he said. “Something I’ve always been proud of is the people that we have working here.”

Although there have been challenges along the way, support from the community has kept the company going.

“There’s a long list of hurdles, but we just try to get up every morning and have a positive outlook and keep pushing forward,” Simon said.

“It is a lot of work to make this stuff happen so we definitely appreciate all the support, both from our local customers and customers all over the place.”