YORKTON -- A local organization in Yorkton is helping residents dig into their family trees, by teaching them how to trace their genealogy.

The Yorkton Genealogy Society is looking to grow its membership while teaching tips and tricks on how to trace your family lineage.

“I do Polish and Ukrainian and I know who does the English. We don't have a broader range of different nationalities to speak up," said Lynda Burback, president of the society.

Burback joined the society as a way to try and match names to faces in an old family photo, and now has binders of information which helps her feel closer to her father and relatives.

"Anybody that they were close to I would like to be able to help them get closer to it than originally."

Burback’s roots are planted in the Parkland region, but the society welcomes those from anywhere.

Doris Maben, the society’s secretary, is originally from Detroit. On top of the society, she has also received credentials from the Genealogical Institute in Toronto.

"From learning about genealogy and from working with people here I’ve learned how to apply a lot of the things to my own search," explained Maben, who has a twin sister in Detroit who sparked her interest in genealogy. 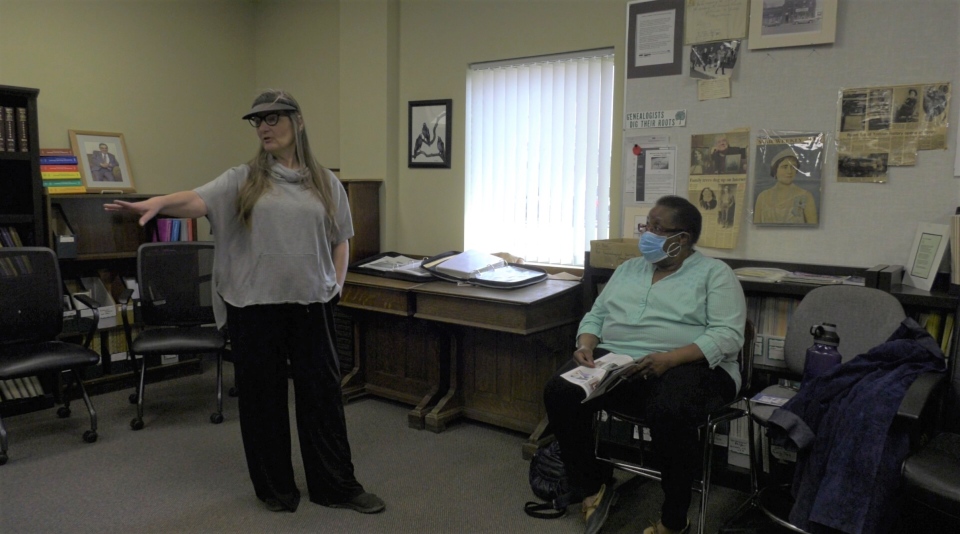 Lynda Burback and Doris Mabel (right) chatting about their ancestors.

The society encouraged her to try DNA ancestry tracing, which lead her to discover a connection to tobacco plantations owned by the Hairston family, one of the largest slave-owning families in the southern United States.

"It gives me a lot of information as to how my relatives grew up, what happened to them, why they did such certain things and it just makes me more proud," said Maben of genealogy.

Maben and Burback’s interest came later in life, but they say it’s never too early to start tracing your lineage.

"The younger people, too, want to know about their ancestors and I know for a fact some of their ancestors, like their parents, really don't know themselves," said Maben.

She added while the society is welcoming anyone interested to come and receive guidance, they are especially interested in newcomers to Canada as well as Metis and First Nations people when it comes to getting them going in genealogy.

The society would also like to partner up and work with organizations when possible.

Currently, the group meets monthly via Zoom with a break over the summer months. Those looking to join can reach out on social media.