Here's what first-time homebuyers need to know about the Sask. real estate market

Here's what first-time homebuyers need to know about the Sask. real estate market

With housing inventory levels at an all time low and prices on the rise, prospective first-time homebuyers in Saskatchewan are feeling the effects of an uncertain market.

For the past six months, Sydney Morin, a 23-year-old nursing student who is heading to school this September, and her partner have been looking to buy their first home, to no avail.

Morin currently works part time and rents a duplex in the Cathedral area in Regina.

“It kind of just dwindled down slowly,” Morin explained. “We weren't really seeing anything that we liked and kind of got disheartened with the whole process.”

“It's just kind of at a standstill right now.”

Morin is hopeful market conditions will improve, but industry experts are warning some of the current challenges are likely to continue.

One issue buyers across Canada are currently dealing with is the rising cost of homes. Over the past two years, the benchmark price for a typical residential property in Regina rose by 14 per cent. 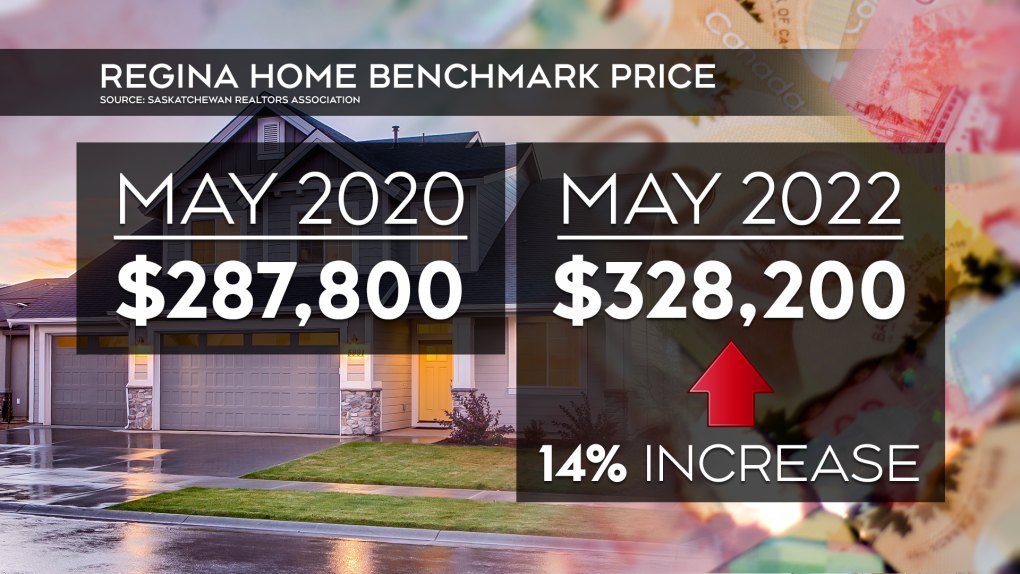 Chris Guerette, the CEO of the Saskatchewan Realtors Association (SRA), is one of the many leaders in the industry warning that the immediate future is looking difficult for those entering the house hunt.

“What we're seeing is a market that is quite busy here in Saskatchewan. We're seeing in our recent numbers that sales have dipped,” Guerette explained.

“That's really the reality of some headwinds that we're all experiencing across the country in terms of inflationary pressures and interest rates that are rising. But what's important to note is our inventory levels are still also dropping, so it's not providing much relief.”

Peter Fourlas, a realtor and associate broker who has worked in the Regina area for the past 14 years, has his own theory on the market’s current state.

“I think with a decrease in the interest rates, the last few years, a lot of those buyers came out of the woodwork to purchase,” said Fourlas. “So it's keeping our inventory levels at an all time low. Specifically from 2016 to 2020, when we had a severe overage of inventory.”

Records from the SRA seem to support Fourla’s theory. Annual house sales for the Regina area in 2016 totaled 2,828 with a remaining inventory of 1,215 homes at the end of the year.

Sales in 2021 were record breaking in the 10 years of available data. The remaining inventory in Regina at the end of year numbered 1,252 homes.

Demand and population have largely increased while inventory has only done so marginally.

Besides inflation, a shortage of housing is the prevalent issue that the Saskatchewan Housing Continuum Network (SHCN) is currently preparing for.

Immigration and natural growth in the province is expected to add 220,000 residents by 2030, increasing Saskatchewan’s population to 1.4 million, according to the Saskatchewan Growth Plan.

The SCHN estimates that the province will have to build anywhere from 95,000 to 141,000 housing units to accommodate this projected growth. 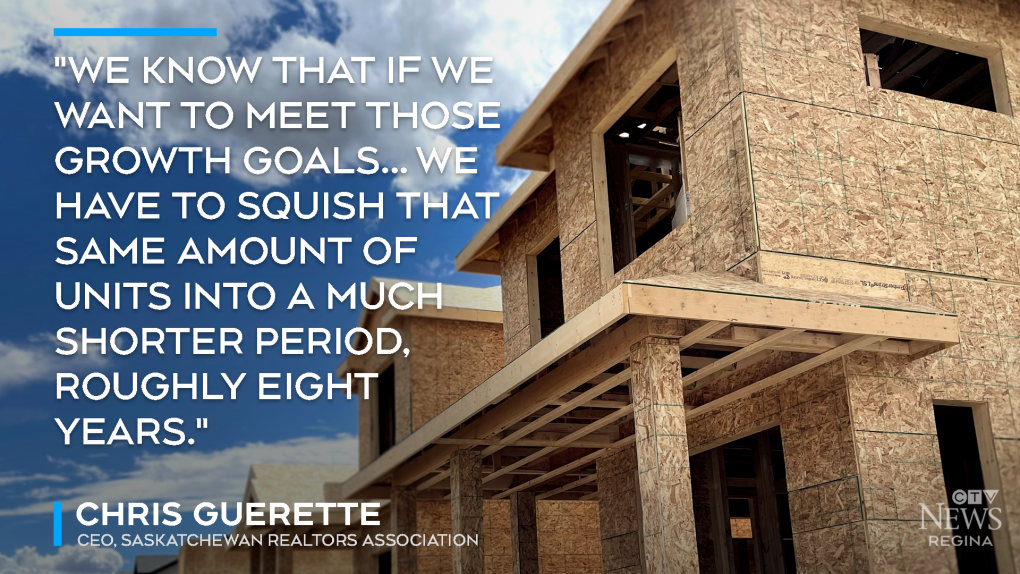 “We know that if we want to meet those growth goals… we have to squish that same amount of units into a much shorter period, roughly eight years,” Guerette explained.

This comes as Canada as a whole is experiencing a housing deficit of approximately 1.8 million units according to Guerette.

Saskatchewan is not alone in this issue, and while there is not a detailed plan in place at this time, Guerette believes the goals are still very much in reach.

“We think it's still very possible to go there,” she said. “But we need to start having those conversations now.”

SO HOW DO YOU BUY A HOUSE?

Skott Enns describes himself as a ‘matchmaker.’

Enns has worked as a licensed mortgage broker since 2012, and acts as an intermediary between his clients and the various lenders he works with.

One of the main issues Enns sees is credit history, or lack there of, with prospective first-time buyers.

“The reality is that when someone's coming in and they want to borrow $300,000 or $400,000, a lot of what the lenders base their decision on is the credit history that the client has,” said Enns.

“If that client has zero credit history, it's going to be an uphill battle to get them the mortgage.”

Poor decisions with credit cards and bills are another prevalent issue that Enns sees frequently.

“A lot of this is not taught in high school, and a lot of people's parents don't educate kids on this either. You know, people were stupid with credit,” he explained.

“They chose not to make the credit card payments, they chose to wait and not pay the phone bill, and it went to collections. So I mean, that can also be an uphill battle as well.”

Another important aspect of the home buying process is the down payment. 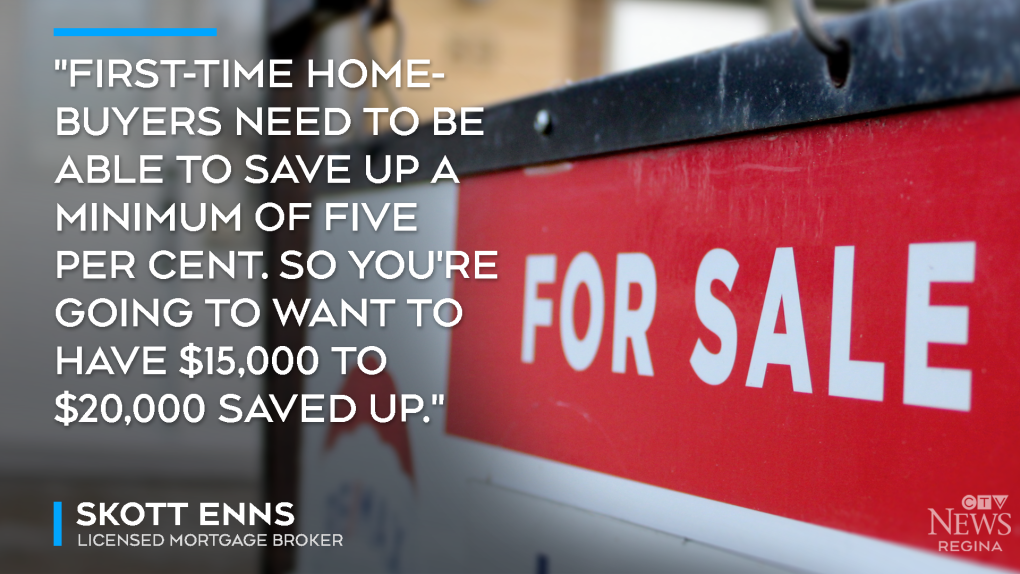 The process of both finding and buying a home can be explained as a multi step outline:

An important concept in the financing of a home is whether to use a fixed or variable interest rate mortgage.

Enns is a believer in variable rate mortgages due to their flexibility, a reason he attributes to around 80 per cent of his clients utilizing variable interest rates.

“As of right now, in many cases, there’s about a two per cent gap between fixed and variable,” he explained.

The advantage of a variable interest loan is that the buyer can utilize declining interest rates, because as rates fall, their loan payments decrease as well.

On the other side of the coin, buyers will also be paying more as interest rates rise.

“Within this last year, they've increased quite significantly,” said Enns. “Now, for the most part, everything’s going to be about four per cent.”

The advantage of lower interest rates may be taken away with the current climate, but as Enns sees it, flexibility still reigns supreme.

“If you are breaking your variable rate mortgage, for whatever reason, the penalty for getting out is only a three month interest penalty, which is the smallest penalty that you'll ever pay when you're breaking the mortgage,” he said.

As the name suggests, fixed interest rate loans do not have a changing interest rate. The buyer is guaranteed the same payment no matter where the market shifts. This security comes at a cost however, as there are typically large fees attached if the buyer wants to get out of the loan.

“Anytime you hear horror stories of people that have their bank charging them $15,000 or $20,000 to get out of their mortgage; those are all fixed rate mortgage penalties,” said Enns.

Regina’s ever shifting soil, wreaks havoc on many parts of the city, compromising foundations, causing structure problems and adding roadblocks to a market that is already difficult to enter.

Morin witnessed the effects of the “Regina gumbo” first hand during her month’s long home search.

“Generally, a lot of them had structural issues,” she said of the houses she viewed.

“You're just kind of stuck with it unless you have that money. So, it's just kind of finding one that isn't horrible.”

Fourlas’ restated that there needs to be a lot of caution around structural issues in Regina’s housing market.

“My job is always to ensure that they're making a good decision for now, but as well as that five years down the road, 10 years down the road,” he said about his interactions with clients. “That's why it's really important to worry about the structure of the home, first and foremost, over the aesthetics.”

“Because the aesthetics are changeable. The structure is the staple of that home.”

Even with market pressures, uncertainty, and lack of supply, the outlook of those in the real estate industry is positive for the long term.

A main component of this cautious optimism is the fact that Saskatchewan now has the most affordable housing in Canada, recently beating out New Brunswick for the title.

“We're still a province that, compared to our neighbors, is still relatively affordable,” said Guerette. “So when we take a look at what those options are, we want to make sure that we have a housing continuum that has a lot of choice.”

The benchmark price of a residential home in Regina as of May 2022 is $328,200. That figure has been rising since the start of the year, but it, along with interest rates, are bound to normalize.

“We will see interest rates decreasing again in a couple of years. Likely, once the Bank of Canada realizes that maybe they increased rates a little bit too aggressively,” said Enns.

Even with increases in prices, Enns believes that the situation is manageable even for those entering the market for the first time.

“I don't want it to be seen like I'm saying this is the end of the world scenario, because I don't believe it is,” he said. “It’s just sort of is what it is.”

Looking to the future, Morin has cautious optimism that she and her partner will be able to move into a starter home. Maybe not in the coming months, but perhaps in the coming years.

“I don't know if it will get worse. I hope it doesn't. But I could see it happening,” she said. “I sort of have that attitude just based off of it being six months and we're still looking and still kind of holding out.”

Doctors are among those calling for tighter regulation of sodium nitrite as a growing number of Canadians are dying after intentionally ingesting unsafe quantities of the common food preservative in its pure form.

Police in Ontario say they have taken down a criminal network they allege trafficked cocaine and fentanyl and smuggled guns into Canada from the U.S.

Donald Trump 'took the Fifth.' What does it actually mean?

Former U.S. President Donald Trump showed up Wednesday for questioning under oath in New York's civil investigation into his business practices. But he quickly made clear he wouldn't be answering.

A new global study by computer security software company McAfee has found that 60 per cent of Canadian children as young as 10 have experienced some form of cyberbullying.

The Meade County Sheriff’s Office in South Dakota said it has arrested the man wanted in connection with an Amber Alert in Saskatchewan.

The Royal Canadian Air Force has grounded the Snowbirds aerobatic team after one of the jets suffered a hard landing last week in northern British Columbia.

Nova Scotia’s unsolved crimes program is offering its largest reward ever for information in the case of a little boy shot and killed in Dartmouth in December.

Can the spread of monkeypox be stopped?

Since May, nearly 90 countries have reported more than 31,000 cases of monkeypox. The World Health Organization classified the escalating outbreak of the once-rare disease as an international emergency in July; the U.S. declared it a national emergency last week.