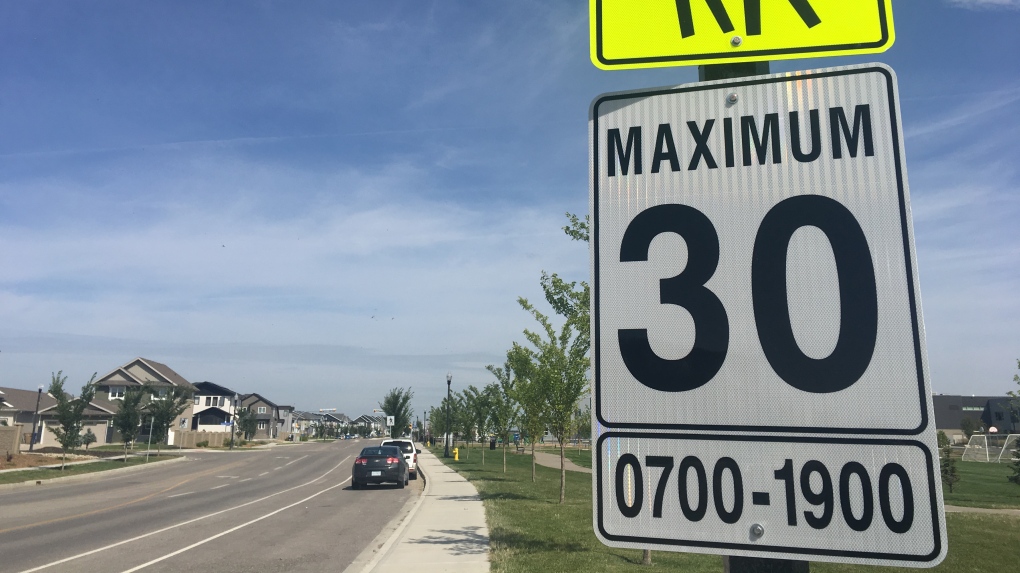 A 30 km/h speed limit sign posted at the start of a school zone in Regina. (Cole Davenport/CTV Regina)

School zone speed limits in Regina will be dropping by 10 km/h at the end of the summer, the result of a city council decision to lower the limit to 30 km/h.

According to the Regina Police Service, the slowdown officially goes into effect on Sept. 1 along with another change that prohibits u-turns in school zones.

Signage for the lower limit is already posted at many of the schools in the Queen City, and the outgoing 40 km/h signs are expected to be fully switched over by the time the school year gets underway.

Some school zones in Regina will be monitored by photo radar, but Sgt. Rob Collins with the RPS Traffic Safety Unit says patrols will have a heavy emphasis on enforcing school zone speeds this fall in areas with or without the cameras.

“About 100, 150 officers who are radar trained and they’ll be deploying those resources, especially in September and October,” Collins said, adding penalties for speeding through school zones will also be increased.

“When you’re travelling over 30km in excess of the speed limit, drivers can expect that their vehicles will be impounded as well,” Collins cautioned.

Once the switch is in effect, school zones speeds will be active between 7 a.m. and 7 p.m. daily, year-round.