Hewitt Commentary: Fajardo was ready to go at the coin flip 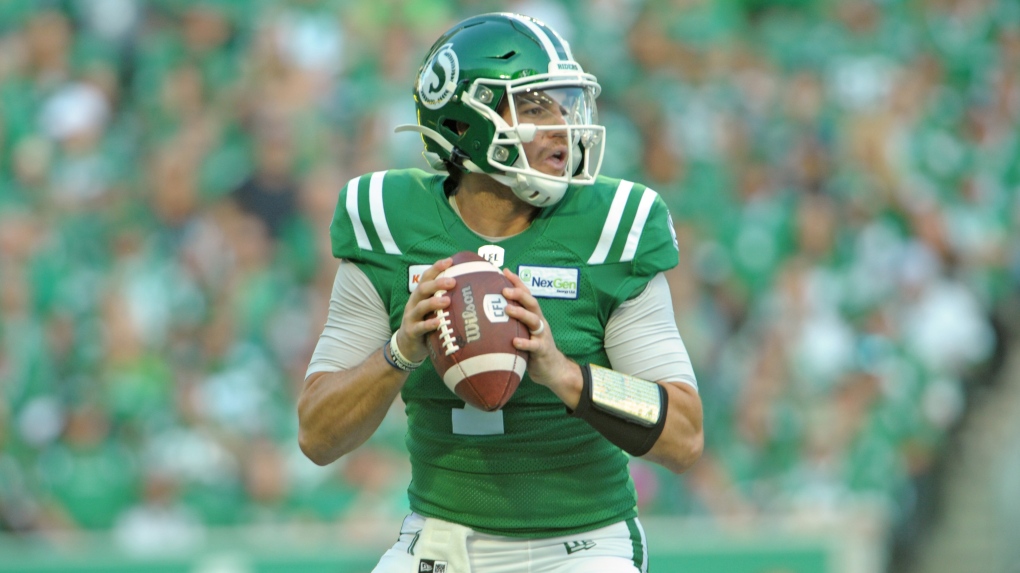 Saskatchewan Roughriders quarterback Cody Fajardo looks for a receiver during first half CFL action against the Montreal Alouettes in Regina on Saturday, Sept. 14, 2019. THE CANADIAN PRESS/Mark Taylor

The tone was evident at the coin flip.

Rider quarterback Cody Fajardo was on the field as the offensive captain. He was expressionless and steely eyed. Fajardo didn’t watch the ref flip the coin. He was somewhere else. If there is a standard look for determination, or concentration, actually both, Cody’s face conveyed it perfectly.

Three hours later, Fajardo led the Riders on yet another last minute drive to win, 54 yards in seven plays, to set up a late field goal.

It was the third time in the past four home games that the 8-4 Riders completed a long, last minute drive, to win a ball game.

Former Dallas Cowboy quarterbacking legend Roger Staubach was once asked how he remained so composed on last minute winning drives (he had 23 of them). His answer was preparation.

At the coin flip, Cody was prepared and ready.

The winning formula for the Roughrider offence is to pass off the run. Running back William Powell had another outstanding performance for Saskatchewan, 124 total yards plus 2 touchdowns. When WP goes, the Riders go, if WP doesn’t go, the Riders don’t go either.

Rider GM Jeremy O’Day made an astute free agent decision signing Powell. No doubt William is happy he’s no longer in Ottawa, where the RedBlacks are now the CFL’s worst team.

It was great to see Fajardo connect on a long pass. He hit Shaq Evans for a big 46 yard gain because the ball was not thrown short. Shaq climbed the ladder and snagged a perfect toss. Evans has become a CFL star without question.

Over on the defensive side, tackle Micah Johnson enjoyed his best game as a Roughrider. In the second quarter on 2nd and inches, Johnson hammered Alouette running back William Stanback for a four yard loss, forcing a punt. Micah seemed to be playing with more emotion and it showed.

Although the Roughrider defensive front played the run well, there was no pass rush without the aid of a blitz. Sack leader Charleston Hughes was injured, and the resulting pass rush bordered on the invisible.

There were many plays when Montreal starting QB Vernon Adams Jr. had enough pocket time to text Aunt Bertha.

The Roughriders need to find an improved edge pass rusher, so hopefully one is coming to the practice roster soon.

Two defensive players who saved the day at the end of the fourth quarter were Cam Judge and Ed Gainey - Cam with a pass deflection that would have otherwise been a completion for a first down, and Ed with a knockdown that prevented a catch, and possible Montreal winning field goal.

Corner L.J. McCray has been a great find, leading the Riders in tackles with seven on Saturday night.

On special teams, punter Jon Ryan was outstanding. Wow! A 52.7 yard average with no big returns. There is no doubt in my mind that Jon can play as a Rider into his 40s.

Placekicker Brett Lauther made the field goal when he had to, and showed confidence in doing so, after two missed kicks. That’s the sign of a solid kicker.

I thought Marcus Thigpen ran with improved spark in this contest, with more snap in his legs.

Although the Saturday night crowd was just over the 30,000 mark, it’s likely the green guys will only sell-out for one game this season, the recent Labour Day Classic.

The team’s only other sell-out chance is their next home game, Oct. 5 against Winnipeg, but that looks to be a long shot.

The Riders are at the top of CFL attendance this season, but have lost ground when you consider the club enjoyed five sell-outs a year ago.

There are a variety of factors for the sell-out decline; a stagnant local economy vs. ticket prices being a main one.

Whether you drank the Kool-Aid of Chris Jones or not, he was a polarizing figure who seemed to generate fan interest.

I didn’t drink his Kool-Aid when he thought Brandon Bridge was a better quarterback than Vernon Adams Jr., but fans talked about him all the time.

The Riders are now in their third and last bye week. Cody Fajardo is staying here in sunny Saskatchewan to work out with the recently returned receiver Jordan Williams-Lambert.

Roger Staubach would have done the same thing.