Hewitt Commentary: Matchup against Ottawa is no gimme 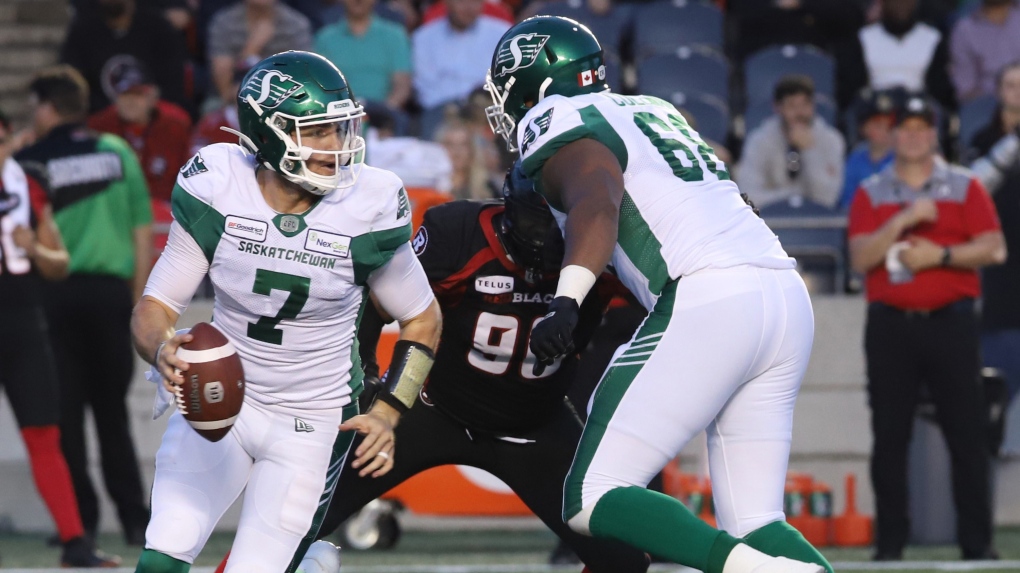 Saskatchewan Roughriders quarterback Cody Fajardo (7) runs with the ball against the Ottawa Redblacks during CFL football action in Ottawa Thursday, June 20, 2019. He's got the hot hand right now, but Fajardo says there's no quarterback controversy with the Saskatchewan Roughriders. In Fajardo's mind, once incumbent Zach Collaros comes off the injured list, the starting job is Collaros's to reclaim. THE CANADIAN PRESS/Fred Chartrand

I am full of nothing but equanimity on a Roughrider bye week. No missed blocks, no fumbles, no breakdowns, no losses, nothing but a calming bliss, along with a few large bags of Cheezies.

Somebody should make Cheezies illegal.

Speaking of bye weeks, the CFL gives three to each team while the NFL schedules one. Great move by the CFL because the Roughriders badly needed a break last week.

Chalk one up to the NFL for their ejection rule. The Command Centre in New York has the authority to instantly eject a player, which they did Sunday night in Minneapolis. The CFL Command Centre should be following suit, that way Simoni Lawrence would have been booted out immediately after his filthy hit on Zach Collaros in Game One.

That play happened right in front of the referee, but you have to take into full account the ref was none other than our good friend Andre Proulx.

There is one good thing about Proulx. He’s a Montreal Canadien fan.

Is this Saturday’s Rider home game against Ottawa a “gimme game”?

Not a friggin chance!

Over the past few weeks, I would argue Ottawa’s defense is the best in the league, playing very fast and physical.

Redblack QB Dominique Davis is struggling, at the moment, but he played his best game of the season on June 20, in Ottawa, against Saskatchewan.

In that tilt Davis seemed unstoppable, passing for 354 yards and three touchdowns. He’s going to feel good coming to Mosaic, so our green defenders better buckle down.

That same theory will also apply to Saskatchewan’s upcoming back-to-back series versus Winnipeg. Blue Bomber starting quarterback Matt Nichols is injured, so will these two future games be a simple walk in the park for the Roughies?

The odds of that are slim to none, and Slim just left town.

If Bomber backup pivot Chris Streveler falters, which could happen from what I’ve seen, Winnipeg might have a better than expected answer in third stringer Sean McGuire. He was spectacular in college at Western Illinois, and is the school’s all-time leading passer. After a few NFL stints, McGuire smoothly shredded the Rider secondary in the pre-season.

I have stated a few times that I’d like to see a bit more speed on the Roughrider roster, notably at one receiver spot and in kick returns.

Under the new Rider brain trust, physical and heavy seem to be the buzz words.

I’ve always liked Cameron Marshall as a running back, and loved him here in Saskatchewan. Last weekend, once again, he was busting multiple tackles for Hamilton. Why has he bounced around so much?

We (as Rider Priders) can brag that Saskatchewan GM Jeremy O’Day made a shrewd off-season move picking up QB Cody Fajardo.

We must also note that the Roughriders fanned on Montreal starter Vernon Adams Jr. who previously languished here in Riderville.

When you consider how poorly Brandon Bridge played for the Riders in last year's semi-final loss to Winnipeg, it indeed boggles the mind.

Former Rider everything Chris Jones knew how to evaluate linebackers and defensive backs, but struggled mightily trying to figure out quarterbacks.

Jones will help the Cleveland Browns defense though, make no mistake about that.

Do you miss him as much as I do?

LaBatte is the frozen tundra type.