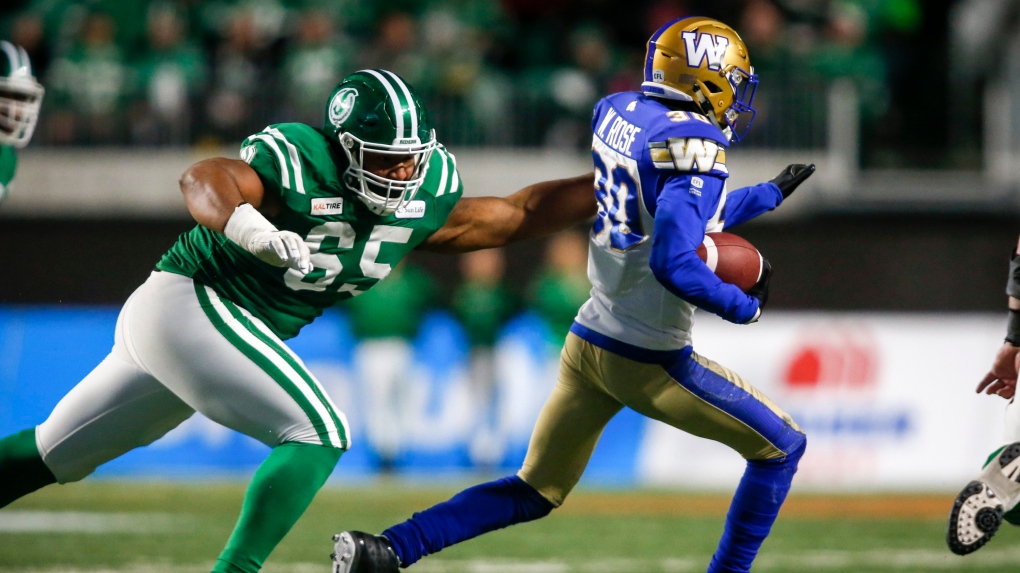 The 2019 CFL Western Final will go down as a 20-13 Bomber victory, and it will also go down as one of the most abysmal efforts to score a touchdown in Rider playoff history.

Five times the Riders were at the Winnipeg five yard line or closer, only to come away with three field goals and two Bomber goal line stands.

Over the past off-season, Rider GM Jeremy O’Day paid running back William Powell well over $200,000 to jump ship from Ottawa as a free agent.

Then, when the Riders really needed their feature back near the Winnipeg goal line, in the Western Final, offensive coordinator Stephen McAdoo inexplicably ignored him.

The one handoff to Powell was blotched when backup quarterback Bryan Bennett handed the ball off right while William ran by left.

You can’t go to Grey Cups by screwing up the most basic of plays like a simple handoff.

You should be able to execute that play blindfolded. It’s high school fundamentals.

Everyone knew that the team that won the battle of the trenches would win this game, and that is what happened. The Saskatchewan run defense was excellent, in fact superb, but the defensive line could not apply much pressure on Bomber QB Zach Collaros.

For the second consecutive season, defensive end Charleston Hughes mysteriously couldn’t get sacks in the second half of the schedule, despite making some great tackles.

When the Riders did blitz, the Winnipeg offensive line picked it right up.

I guess it says it all when, on the last play of the game, Fajardo sees receiver Kyran Moore open in the end zone only to hit the crossbar.

The Riders had something like 15 pass attempts in the red zone to no avail.

Man, this just wasn’t in the cards.

Speaking of Moore, he showed what he could do in a big game because of his speed.

The Rider coaching staff got burned by not making the correct call long ago to go with their faster receivers.

While Manny Arceneaux was a great team leader in 2019, he isn’t the Manny of old. Either Jordan Williams-Lambert or Kenny Stafford or somebody else, who could block and run fast, should have been playing at the wideout position.

Manny couldn’t get to a deep ball early in the Western Final that could have been a possible touchdown.

You got the feeling in the Western Final that the Riders were kept off balance by Winnipeg, never feeling under control.

Once everyone gets over the disappointment of not making it to the 107th Grey Cup, a reflection of the season softens the blow.

First and foremost, the Roughriders have a great leader in Cody Fajardo. Cody played bravely in the Western Final with two torn oblique muscles, and still passed for 366 yards, 100 more than Collaros.

His obvious disappointment at the end of the game showed how deeply committed Cody is to the Saskatchewan Roughriders for the next two seasons.

There was never any question as to the steady improvement the Riders made through the course of the season, along with consistent effort level.

It is also a squad that has to improve in order to have any chance of hosting their own Grey Cup a year from now.

I would caution that this club is not that far away from being too old, we have seen that happen before, and while you certainly need solid experience, once you get too old, it’s game over.